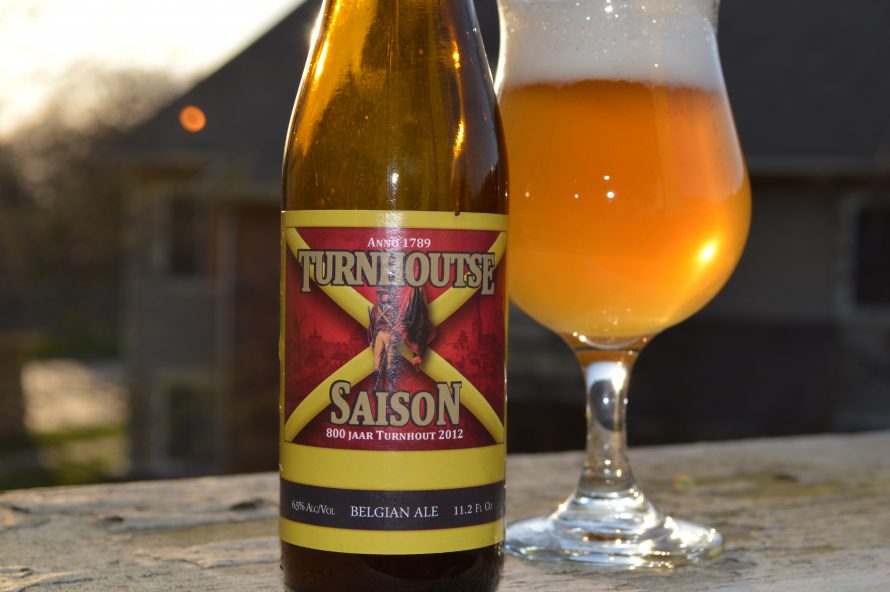 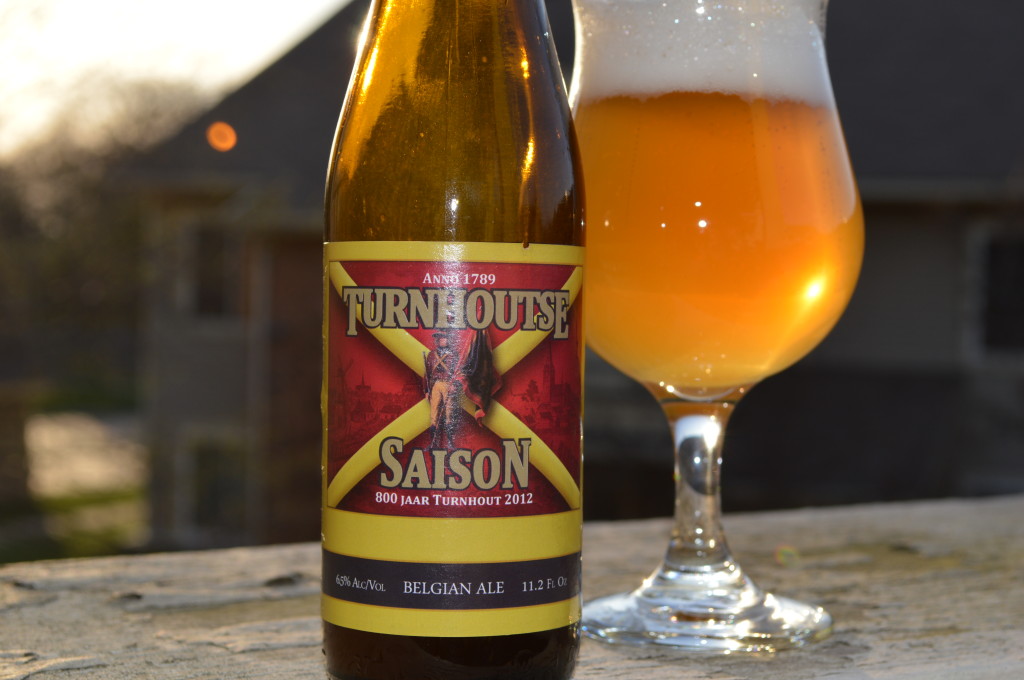 No, that’s not a typo in the title.  The fact that you can’t read the name of the brewery (unless you aren’t a typical ‘Murrican) is because this is a Saison straight from the motherland, Belgium.  Turnhouste Saison was brewed by Hobbybrouwerij Het Nest as a tribute to Turnhout in 1789.  For you history fans, this beer lead to a brief period of independence for Belgium, then known as the Southern Netherlands, and is not commemorated in beer form!  I can’t think of a better way to celebrate history than with a traditional drink.

Being that this is a classic Saison recipe, I’ll expect to find notes of fruit, most likely orange or lemon, pepper and barnyard funk wrapped in a light, malty, highly carbonated beer.  This was brewed with nobel hops, and is as close to an old-school Saison as Het Nest could provide.  Let’s dive in!

This beer wanted to be in my glass before I was even ready! The carbonation forced this Saison to bubble out of the bottle when I opened it, telling me either it’s beautifully carbonated, or it’s slightly over-carbonated.  It’s the stereotypical wet-hay look that I get from Saisons, with a huge and thick brilliantly-white head.  Though the head is ample, the lacing doesn’t quite stick to the glass the way I’d expect.

The aroma of Turnhoutse Saison is fruitier than I imagined.  Green apple, pears, grapes, and alcohol come together to smell more like a wine than beer.  It smells a bit sour, too.  I’m not sure if there is Brett in here, but the tartness suggests there is.  Some pepper notes round it out, but if I were to guess the style based on smell, I’d say this is a sour before a Saison.  There’s not a big funkiness that I’m used to out of traditional Saisons.

Before I even swallow I feel the sharp, needle-like tingling of the carbonation.  This thing is like Pop Rocks, ready to explode.  The carbonation leads to a faux-full body.  I say that because the liquid itself seems fairly thin, but with the carbonation foaming out it feels creamier and thicker than it should.  There’s not a bitter or sweet coating in my mouth, but more just the residual feeling of CO2 still bursting on my palate. The finish is slightly alcoholic, but not too warm.

Like the aroma, the flavor of Turnhoutse Saison is fruity.  It taste a lot like green apples, grain husk, and alcohol.  Although there is only 6.5% ABV, the fusel notes feel a lot higher.  The beer starts off fresh and clean, it reminds me of working outdoors, being around plant life, and eating apples straight off the tree.  But the finish has such an alcoholic presence that it washes that pleasant transcendence away.  There is a slight aftertaste of astringency too, like the grains were steeped too long.  It’s slightly bitter, slightly sour, and slightly cardboard-like.  Green grapes also make an appearance as an afterthought, making this feel almost like a sparkling white wine, but with some malt flavors added.

To be honest, I didn’t know a ton about Turnhouste Saison before I tried it.  I loved that it was a traditional style from Belgium itself, but hadn’t heard good or bad things about it before.  That’s a great thing when doing a review because it can give for an unbiased and un-hyped opinion.  For me, this beer fell flat of what I wanted out of a Saison.  It was terribly overcarbonated which made it bitter and sharp.  It didn’t have the Saison/farmhouse flavors I expected, but instead had notes of green apples and grapes.  The alcohol was not balanced for my liking either.   With all that in mind, I’m giving Turnhoutse Saison a 70, or C-.

This beer is drinkable, it really is.  It has some good malt qualities, but I the balance and base flavors were just off for me.  I wanted orange and lemon, and got green apple.  I wanted refreshing and clean, but got bitter and warm.  It’s a beer that is good if you’re in the mood for it, but not my personal go-to brew.