Chico, CA— April 26, 2016—Sierra Nevada is pleased to announce Bamberg, Germany’s Mahrs Bräu as their brewing partner for this year’s Oktoberfest seasonal beer. Released each fall, Sierra Nevada’s Oktoberfest collaborative seasonal will feature a different German brewery every year. The partnership blends centuries of brewing tradition with modern spirit, giving craft drinkers the ultimate Oktoberfest, a festival beer unlike any they’ve experienced in the US.

Last fall, Sierra Nevada’s owners, Ken Grossman and Brian Grossman, travelled to Upper Franconia, a Northern Bavarian region in Germany, to meet with the venerable brewers and found plenty of common ground with the Mahrs Bräu team. “We’re impressed by their commitment to quality, as well as their inventive spirit and eye toward creative and interesting beers,” said Brian Grossman. 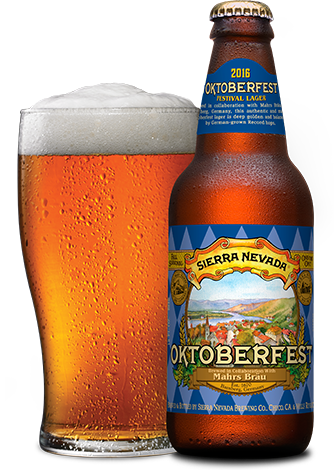 Like Sierra Nevada, Mahrs Bräu is a privately-held, family-owned brewery. Founded in 1670, Mahrs Bräu is now owned by the Michel family and run by Stephan Michel who represents the fourth generation of the family. Mahrs Bräu is highly regarded for their traditionally styled lagers, but also for their technical precision and willingness to experiment. In 2007, Mahrs Bräu was named the “Best Brewery in the World” by Men’s Journal magazine. In 2010, Mahrs was awarded the gold medal at the European Beer Star awards for their “Festtags Weisse” beer and in the same year, then owner Ingmar Michel was awarded the prestigious “Bayerischen Bierordens” medal for brewing excellence. Mahrs Bräu also has a commitment to environmental responsibility and participates in the strict Bavarian Environmental Pact.

“We’re excited to be working together with Mahrs Bräu,” said Ken Grossman, “We have so much in common with them in the way we approach brewing, and the way we run our businesses. We’re both independent, family-owned breweries with a respect for tradition, yet we’re not handcuffed by it. We’re not afraid to innovate and to change things up. We both care deeply about the environment, and work to make our respective beers with a mindful eye on how that impacts the world around us.”

The Sierra Nevada and Mahrs Bräu collaboration Oktoberfest will hit retail shelves in August. The beer will be a traditional festival lager featuring the nearly forgotten “Record” hop varietal and lean heavily on the rich and layered malt complexity found in the best authentic festival beers.

About Sierra Nevada Brewing Co.Founded in 1980, Sierra Nevada Brewing Co. is one of America’s premier craft breweries, highly regarded for using only the finest quality ingredients. The pioneering spirit that launched Sierra Nevada now spans both coasts with breweries in Chico, California and Mills River, North Carolina. Sierra Nevada has set the standard for craft brewers worldwide with innovations in the brewhouse as well as advances in sustainability. It is famous for its extensive line of beers including Pale Ale, Torpedo®, Otra Vez Gose-style Ale, Hop Hunter® IPA, Nooner® Pilsner, Porter, Stout, Kellerweis® and a host of seasonal, specialty and limited release beers. Learn more at www.sierranevada.com. About Mahrs BräuFounded in 1670, Mahrs Bräu is considered one of Germany’s leading breweries. Located in Bamberg, Germany, in the Upper Franconia region of Bavaria, Mahrs Bräu has made a name for themselves in a region known for having one of the highest concentrations of breweries in the world. More information at: http://www.mahrs.de/en/