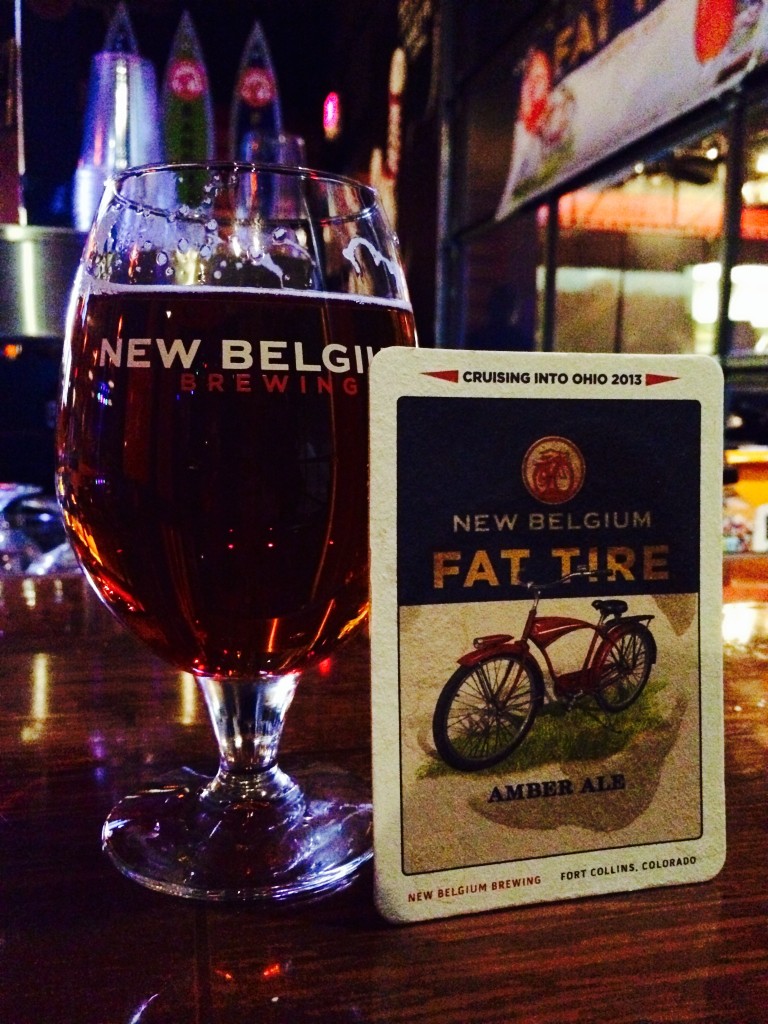 If you are a lover of Colorado breweries, chances are you are also a lover of New Belgium Brewing Company. Chances are even higher that you are also a lover of Fat Tire, their signature brew. Fat Tire is a staple in the craft beer industry. It is almost always trending on the micro beer section of Untappd and a huge fan favorite. It is widely regarded as a gateway beer for people interested in getting into craft beer. It is an easy-going, but absolutely delicious beverage that I was so excited and happy to finally get a chance to enjoy at the New Belgium Release Party.

Here is what New Belgium has to say about Fat Tire:

“Named in honor of our founder Jeff’s bike trip through Belgium, Fat Tire Amber Ale marks a turning point in the young electrical engineer’s home brewing. Belgian beers use a far broader palette of ingredients (fruits, spices, esoteric yeast strains) than German or English styles. Jeff found the Belgian approach freeing. Upon his return, Jeff created Fat Tire and Abbey Belgian Ale, (assuming Abbey would be his big gun). He and his wife, Kim traveled around sampling their homebrews to the public. Fat Tire’s appeal quickly became evident. People liked everything about it. Except the name. Fat Tire won fans is in its sense of balance: toasty, biscuit-like malt flavors coasting in equilibrium with hoppy freshness.”

Let’s see what I thought about Fat Tire!

Fat Tire pours a beautifully clear copper tone. There are rich and vibrant caramel color tones that are complimented quite nicely by a little white head that lightly laces the glass as you enjoy the beer.

I suppose if there was an aspect of Fat Tire that I found to be a little lacking, it was the aroma. It wasn’t that it smelled bad, it was simply that it didn’t have much of a smell at all. I imagine that some of the problem was that the beer was in cold-shock, and thus all of the intended aromas were not quite yet present, but either way, there is not a strong aroma. What I did pick up, however, was malts and a slight breadiness. There is a very light note of caramel as well, but overall, very tame in this department.

It is not a surprise that Fat Tire is loved by many. It really has a very lovely taste. I was met by very clean and crisp flavors as well as a very smooth and refreshing taste to it. There is a mild bread, almost biscuity taste. Overall just very clean. At the backend, I detected a very light hop profile to add just a little something to the taste.

I give Fat Tire a 93, or a solid A. In the end, it is not difficult to see why Fat Tire has such a cult following and is known as a classic in the craft industry. Even in this world of extreme hop concoctions, sours, spicy beers and other beverages that push the limits of beer, Fat Tire still holds up. It is a really easy-drinking beer that is perfect for introducing someone into the world of craft beer, but even seasoned beer drinkers will still enjoy their experience with Fat Tire.