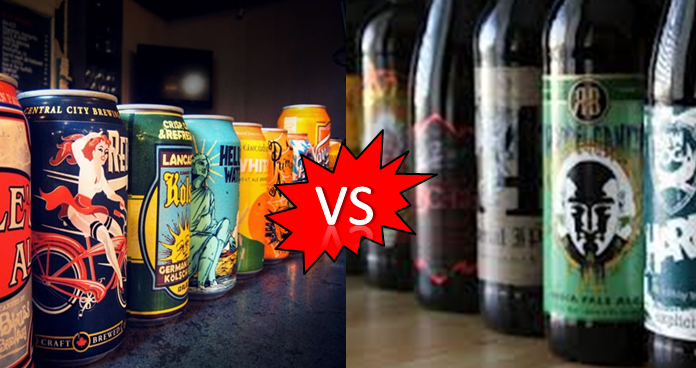 For years now the battle has raged on — do I buy canned beer, or bottled beer?  We’ve touched on this in our Beer Myths page, but, like anything in life, there are always two sides to the story.  Today, we want to hear your thoughts.  Below, you will find both sides to the Cans vs. Bottles battle that has polarized the beer world, so read on, and take the poll in our winner-take-all smackdown of Cans and Bottles.

The Case for Cans:

Lighter, cheaper to buy, handle, and ship, and 100% opaque allowing no light to spoil your beer — these are the main arguments for canning beer.  In terms of freshness, nothing will keep your craft beer tasting better for longer than putting it in a can. It’s a fully sealed container that allows for no oxygen to enter, meaning that there is very little risk for your beer to become oxidized and spoil.  But let’s not even focus on the obvious scientific factors, those are too easy to point out.  Let’s look at the social side of life in a can.

I have many passions in life, but two of them are sports and craft beer.  For years, the only brews you could get at a sports game were domestic light lagers, or, if you were lucky, your stadium would have a small stand with some better beers on tap.  The main reason? Bottles.  For years now, sporting stadiums have disallowed glass beer bottles because they break too easily, and can be dangerous in the hands of drunken, irate, fans (I’m looking at you fellow Browns Fans!).  The problem is, that most craft breweries opt for bottles, and don’t have the means to get the sanctioned plastic bottles for stadiums.  The solution? You guessed it: Cans!  More and more craft breweries are looking at the can as a viable alternative to bottles, and, with more cans in circulation we will have more craft beer at football games.  Huzzah!

Another passion of mine is boating.  I live on the shores of Lake Erie, and in the summer time you will find me cruising the open water.  I’ll ask this question.  Have you ever tried to pack a cooler with bottles of beer?  Their odd shape and length doesn’t allow for maximum spatial utilization.  If I could pack cans, I’d have more beer for my boat, and that’s more fun for me.  Also, what about those pesky tops?  If you’ve ever forgotten to bring a bottle opener somewhere, you’ll know my pain.  With cans, you don’t even need a tool to start enjoying your brew.  Just crack it open and enjoy.

I don’t think I’m alone here with my love of cans, here are two glaring examples of forward thinkers moving towards cans.  The first, is our friend Bell’s Brewery.  Bell’s gave us a tour of their facility and explained their plan for expansion.  Included is their first ever canning line.  If you’re anything like me, you’ll look like a Beiber-fan-girl when you first see these on the shelves.

Example number two:  Heady Topper.  If you know your craft beer, then you know that The Alchemist’s Heady Topper is consistently rated as one of the best IPA’s, hell, one of the best BEERS in the US.  Not only does The Alchemist serve their highly regarded beer in a can, they actually tell you to drink it directly from the can.  This ensures that no flavor is lost while pouring it into the glass.  If cans were so bad, would you see these in circulation?  I rest my case!

The Case for Bottles:

Ok, ok, cans are trendy and all, but when you think of beer, do you really think of a small, feeble, aluminum can?  I mean, just do a Google image search of “Beer” and you’ll notice one thing — bottles are king.  If you’ve ever had a bottled version of a beer that also comes in a can, you may notice something else — bottled versions taste better.  Here’s why.

When you crack open a can of beer, you normally do so with the intention of drinking straight from that can.  When you drink from a can you assuredly will touch your tongue to the can.  That simple, yet fatal, action ruins the entire experience of drinking from a can.  Instead of having beer delivered cleanly to your palate, you’re actually tasting metal and beer.  You might as well be drinking a beer while sucking on a quarter, it tastes about the same.  Breweries and manufacturers want to tell you that with the technology today you won’t taste the metal, but, psychologically, you taste it.  In fact, the advances have come from the can lining, not the can itself, meaning that the beer won’t pick up metallic tastes, but your tongue licking the outer rim of the can still will.

Another thing about bottles is the class factor.  I hate to bring our arch-nemesis wine into this, but craft beer is still fighting an uphill battle of perception among wine drinkers.  You, as a craft beer fan, know that beer is amazing and wonderful and complex, but wine snobs still stick their nose in the air at drinking such a “lowly beverage”.  Can you imagine going to your wine-loving in-law’s house with a can of beer?  Let me save you the humiliation and give you a good, old-fashioned, bottle of craft beer.

Maybe the best part of beer bottles is that I can reuse them.  Yes, cans are recyclable, but I can’t use a can as easily as I can use a bottle.  See, I’m a home-brewer, and bottles can get costly.  If I can drink a beer and save the bottle, I’ve just doubled my happiness.  All I have to do is wash off the labels, give the inside a good cleaning and sanitizing, and they’re ready for use.  If I buy a can of beer, I have to throw away the can, that’s just a waste!

Voice in on our poll below.  Do you prefer cans, bottles, or does it not matter as long as you have a glass?