Bell’s 30th Anniversary, an American Imperial Stout, to be released in September 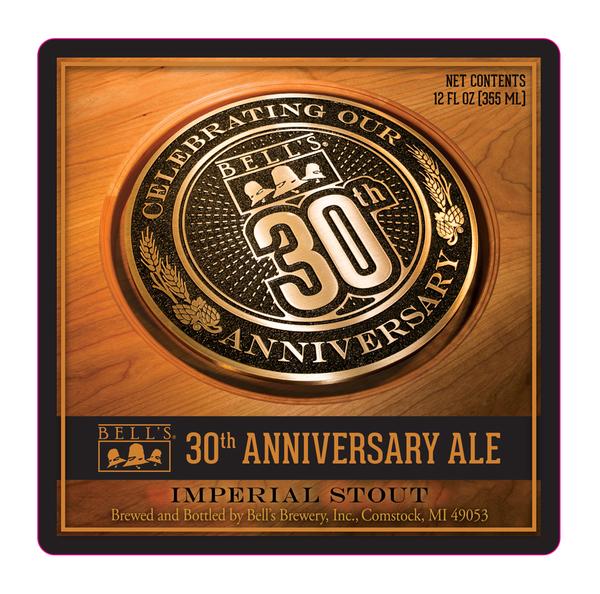 An American Imperial Stout, Bell’s 30th Anniversary Ale is also a nod to another beer and one of the earliest examples of the style released here in the United States, Bell’s Expedition Stout.

“This beer is a testament to three-plus decades of hard-work. It honors all that has helped us get to this point – hard work, quality and authenticity,” said Larry Bell, Bell’s President and Founder.

“It reminds us of where we’ve been, how we’ve grown over the years, the challenges we’ve faced and at the same time, looks forward to what comes next,” he added.

Check out our review of Bell’s Hopslam from our visit at their Eccentric Cafe’!

A fair amount of Polaris hops lend a brightness and a nice character that will help carry the beer in its early stages making it incredibly drinkable and interesting. Dark malt characteristics will continue to develop over time, so that beer drinkers who choose to cellar it, can enjoy the beer for years to come.

It will be available in bottles (6-packs) and on draught. The label will feature a special seal designed and made specifically to commemorate and celebrate Bell’s 30thAnniversary.

More information will be announced on Bell’s social media pages as it becomes available.

Bell’s Brewery, Inc. began in 1985 with a quest for better beer and a 15 gallon soup kettle. Since then, we’ve grown into a regional craft brewery that employs more than 400 people over a 22 state area, in addition to Puerto Rico and Washington DC. The dedication to brewing flavorful, unfiltered, quality craft beers that started in 1985 is still with us today. We currently brew over 20 beers for distribution as well as many other small batch beers that are served at our pub in Kalamazoo, the Eccentric Cafe. Our ongoing goal is to brew thoughtfully, creatively and artistically. We strive to bring an authentic and pleasant experience to all of our customers through our unique ales and beers. For more information, please visit bellsbeer.com.