Three Floyds is always a popular choice, but it’s hard to look around beer sites on the internet and not get bombarded with pictures from the Munster, IN brewery. Dark Lord day has come and gone and everyone is doing their best to get a taste of that black gold. Us, on the other hand, are rarely fortunate enough to see the mark of FFF sitting on our bottle-shop shelves. When we do, we snag as many as we can, and that’s just what happened when we saw Alpha King, sitting on it’s thrown awaiting our judgement.

Alpha King is a highly-hopped pale ale, but not an IPA. That reminds me of Gumballhead, how they described it as a wheat ale, but not a wheat IPA. In fact, the word Alpha comes from the term alpha acids which gives the bittering component to hops plants, and the picture seems to be a personified hop plant drizzling pellets into a glass of beer.  I don’t know what their inclination to not call this an IPA is, but for all intense and purposes, that’s what it appears to be.

It’s also important to note that this is Three Floyds’ “flagship” beer.  Flagship beers are the beers that exemplify the brewery’s identity and persona.  They are the beers that they expect to have a high selling rate, and are usually their best brews.  The point of a flagship beer is that when you hear the name of the brewery, you instantly think of that beer in association.  To call Alpha King a flagship is Three Floyds’ way of holding this beer in exceptionally high regards.

I remember a bartender once telling me that “Pale ales are dark.”  That’s not always the case, but Alpha King comes in slightly more red and brown than I thought it would.  I could see straight through the beer in the bottle, so I assumed it would pour golden yellow.  What I get is a clear, reddish-brown, rust colored brew.  It’s like a caramel colored, stained-glass window.  The head on Alpha King is perfect too.  It’s tight, creamy, frothy, and lingers well past what I assumed it would.  A warranted crown for this flagship beer. 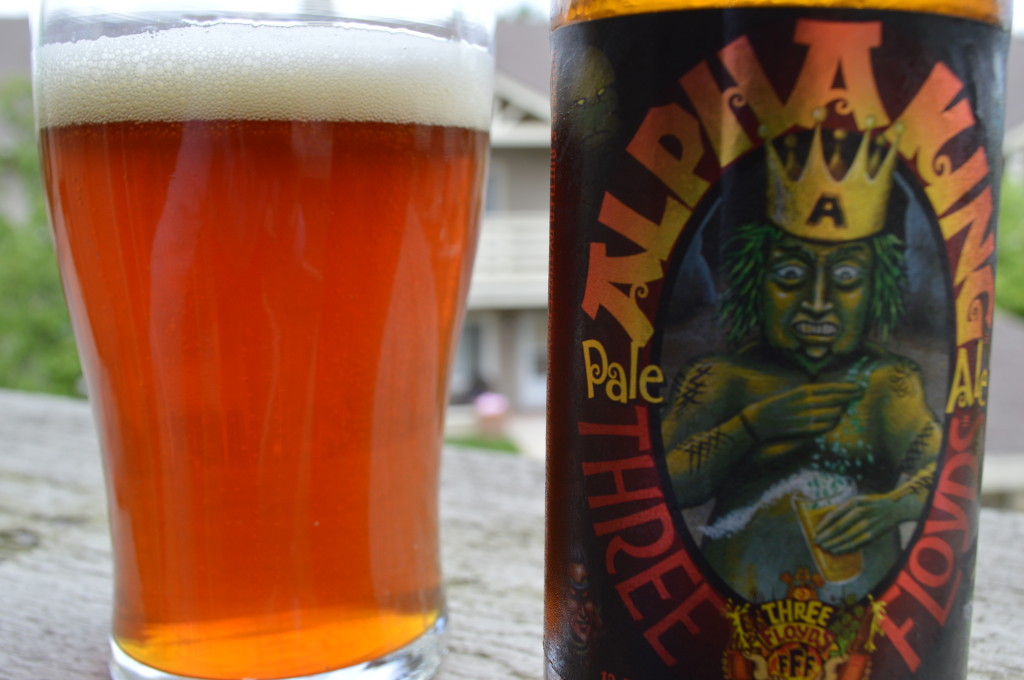 Just as I suspected, this smells like a fruity, citrusy IPA.  There are some dirt-like-earth tones that come from late hop additions, but the focal point is a bright, orange-peel-like smell.  To compliment the hops, undertones of caramel and biscuit emerge from the beer.  It’s actually a well balanced aroma, and while hops dominate, they aren’t the only characteristic presenting themselves.  Overall, it’s aroma is clean and pleasant.

I wish Alpha King gave me a bit more carbonation, but for a pale ale, the body is perfect.  It isn’t watered down, but not full or viscous either.  A perfect medium.  It’s a bit sticky from the residual sugars, but it finishes clean and smooth with a very pleasant aftertaste.

As much as I complained that they should just get it over with and call this an IPA, I get why they didn’t, now.  Bitter hops are very much present, but this is one of the cleanest beers I’ve ever had.  It starts off with a decent amount of caramel, honey, bitter orange peel, and pine-like resin, but quickly mellows into a smooth, clean finish.  The malt is sweet enough to counteract the high alpha hoppiness and creates a cool cancellation reaction in your mouth.  It is reminiscent of fireworks, a big explosive bang up front, but you’re quickly left with nothing more than a shadow of it’s former self.

Does Alpha King live up to the title of being a Flagship beer?  I’d say yes!  Actually, this is exactly what a brewery wants out of a flagship.  It isn’t too bold, it isn’t too funky, but it isn’t just a light lager that appeals to the masses.  It shows the masterful technique that the brewers of Three Floyds have use when combining hops and malts.  It is a counterbalancing beer that suits both Hop Heads and the craft beer n00b.

I’m going to give Alpha king a 92.  I wish it were slightly less bitter, but I love the hop flavor and experience of drinking this beer.  It is perfect for someone who is venturing into a wold of hops because the flavor doesn’t linger, but presents itself early on for you to enjoy.  It’s just sweet enough to keep things in check, but not too sweet that I couldn’t have another glass.  Overall, a solid A beer that could be enjoyed year round with a variety of foods.