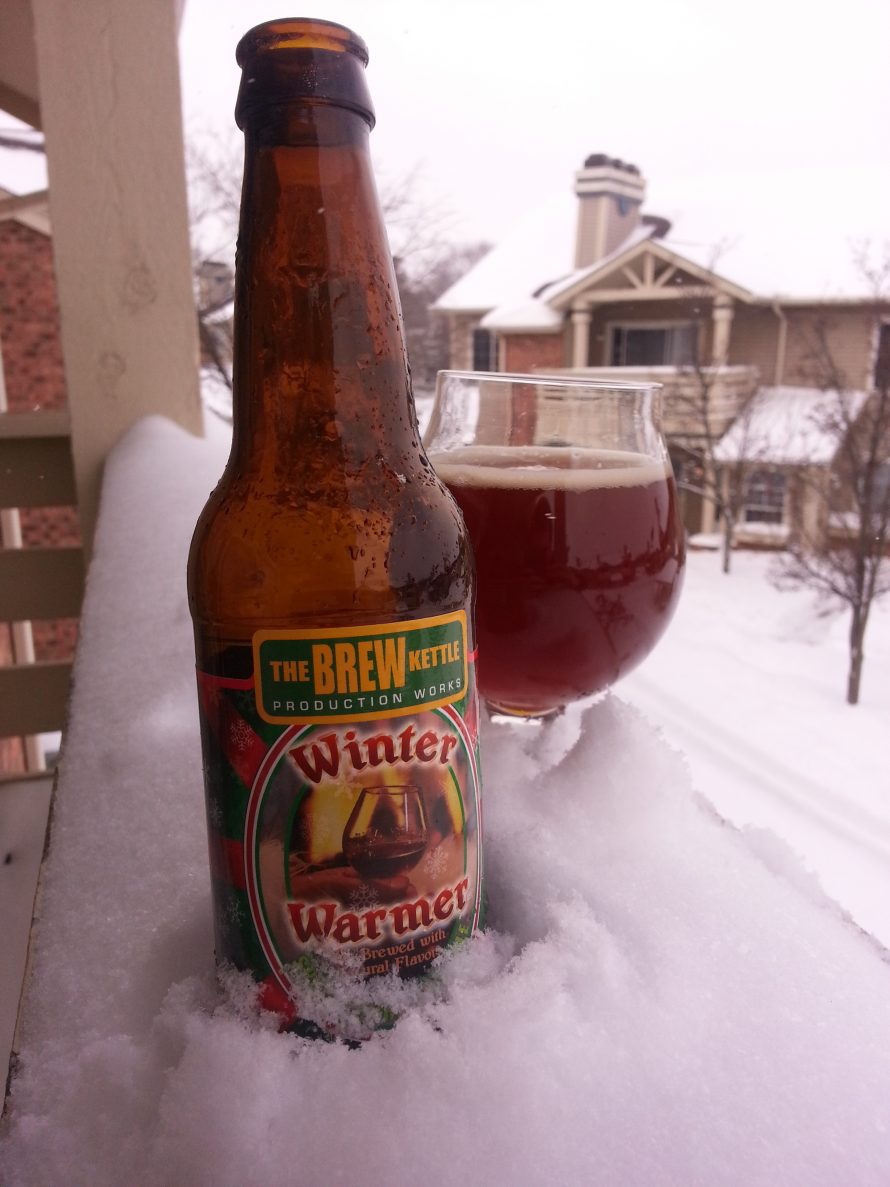 Earlier this year I met up with a fan of the site, Dominic Sberna, to do a beer trade and grab a drink.  I gave him some brews that can only be found in Toledo, and he gave me some Cleveland-centric beers I can’t find here.  The one I’m trying today came from The Brew Kettle in Strongsville, Ohio.  I was waiting for the right mood to try out the Winter Warmer, and I can’t think of a better day than today — level three snow, and no school.

The Brew Kettle is actually a very unique style brewery.  They not only offer great beers on a local scale, but they also allow you to brew your own beer on premise!  I have many friends who have done just that.  You brew the beer, you design the label, you bottle it, and you drink it with pride.  What they offer are the facilities to brew in, storage pace, and ingredients.  Also, since there can be some down time in brewing, they offer delicious food to snack on while you wait.

The bottle claims this was brewed with a, “sleigh full of honey”, and they weren’t lying! The honey aroma hit my nose even when I poured this beer outside in the wind!  I also get a big caramel malt note, and hints of citrus, both the orange, and the more tart, bright lemon.  I don’t get a lot of cinnamon or ginger,  just a lot of sweetness and citrus.  Slight alcohol aromas are there, but they aren’t overpowering.

Just as I expected from the minute I poured it, this beer has got a healthy, full body to it.   It is thick, but I wouldn’t call it creamy.  The carbonation is biting.  It is slightly over-carbonated for what I want from a Winter Warmer, which leads to a bit of a burn on the swallow.  The strong flavors of the beer shocks the taste buds awake, and keep them tingling long after the swallow.

Did I mention this was brewed with Honey?  Man, there is a lot of front-loaded sweetness of both honey and caramel/toffee.  I’m assuming this was brewed with large amounts of a dark crystal malt (probably around 60 L), giving it a big and robust sweetness.  The orange and lemon peel get lost on the palate, as do the ginger and cinnamon.  There is a decent amount of booze in the aftertaste, but really this is a two toned beer — honey and caramel.  As expected, there is not much of a hop presence, but the beer does finish somewhat bitter, probably trying to balance out sweetness with some bittering hops.

This is the first beer I’ve tried from the production side of The Brew Kettle.  Their brew-on-premise IPA recipe is delicious, and this Winter Warmer is another solid brew.  I think the description of the beer was a little bit misleading,  I was looking for more spices, and less sweetness, but I would easily give this an 85, B rating.  I wish there was less carbonation, or that it was a little smoother, but this is a good beer for a cold Winter day.  In fact, I feel warmer already!

I’d like to give another shout out to Dominic and thank him for the trade, and I’d also like to invite you guys to check out the Brew Kettle online at www.thebrewkettle.com.  If you’re in the Cleveland area, or can make a trip that way, sign up for a spot to brew on premise.  It is a great way to spend a day.