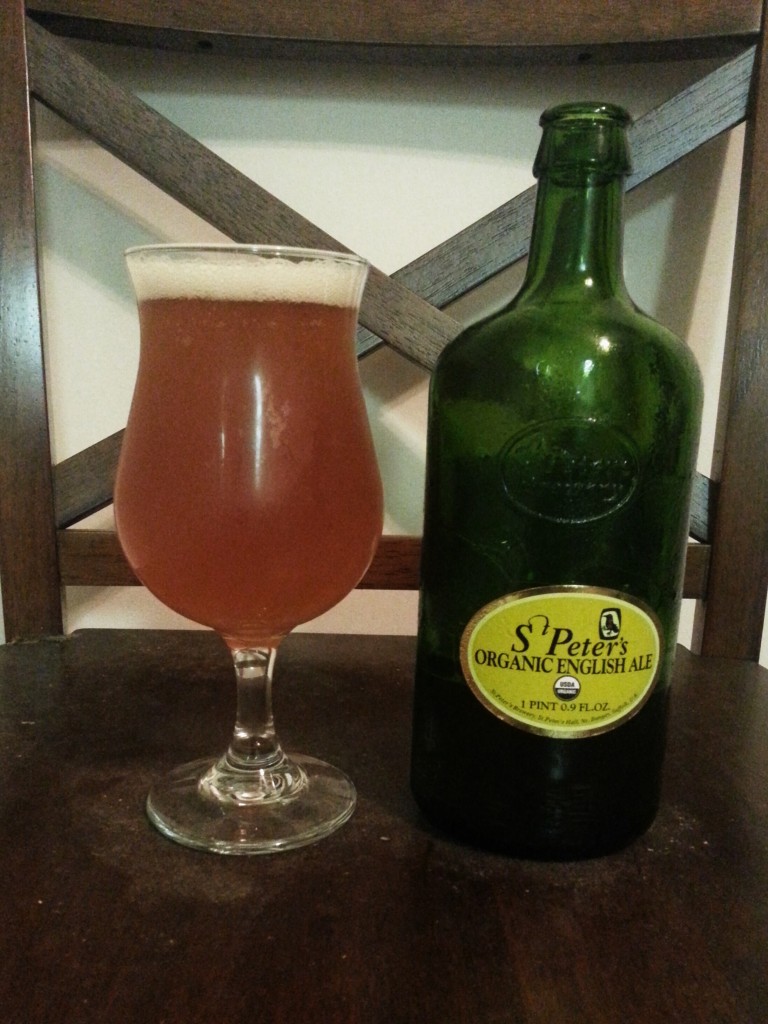 I like nothing more than perusing the build your own six-pack isle and being completely stopped in my tracks.  That is what happened when I stumbled upon St. Peter’s Organic English Ale.  Maybe it was the simplicity of the label, the unique, oval shape of the bottle, or how I could tell it was a unique, hand-made beer before I even popped the cap.

It might not be fair to call this a “Craft Brew” or a “Micro Brew” because those words have the connotation that this is a fairly new brewery making ales in some warehouse in America.  That couldn’t be further from the truth with St. Peters.  As the bottle explains, “St. Peter’s Brewery is located in a medieval hall in a remote, rural corner of Sulfolk, Eastern England…with water drawn from a pure source [deep below the brewery] — as it has been for 700 years.”  Ok, so it turns out that this brewery was founded in 1996, but f that description doesn’t make you want to grab a lance in one hand, and a glass of this in the other, nothing will.

St. Peters OEA is everything like I imagined it would look; deep golden orange, amber color with a thick cream-colored head that lingers on the surface.  When I opened the bottle, it started to foam a little bit as it if couldn’t wait to jump out of the bottle and into my glass.  It is too cloudy to see through which gives it a very organic, old-worldy look.  I don’t want this beer to be clear, I want it to seem like it was made in a dank, dark dungeon, stored in barrels and being protected by dragons.  Mission accomplished

On a side note, as I drink this and swirl it in the glass, I am mesmorised by the lacing.  It reminds me of untouched snow on a sunny day — gorgeous! (See Below) The smell hit me the second the cap came off, and for once I don’t quite know how to explain it.  It is very earthy.  Hoppy, but not in the american, citrus hop way, but in a pungent, sticky, grassy, floral way. There is a heavy malt aroma, like sweet caramel malts, but there is also a sour apple, fruit note as well.  The aroma is complex, rich, and inciting.

St. Peter’s OEA has a great, creamy mouthfeel.  Not as thick as a stout, but I’d say it’s thicker than a medium bodied beer.  The carbonation doesn’t really smack you in the face, it more or less creeps up on your taste-buds giving slight, small tingles to the tongue.  It’s almost as if all of the carbonation is at the top of the beer no matter how you drink it, while the rest of the brew is flat.

I hate to overuse this word, but again the beer is just earthy.  It doesn’t have an overly sweet malt bite, but it is malty in a pale way.  This beer reminds me of an American Pale Ale, but with a twist.  It has a crisp, refreshing, bitter bite, that boarders on sour.  Fruit notes are mild, and it’s actually a pretty plain beer.  I am having trouble discerning whether this is so complex I can’t tell the notes apart, or if it is so simple that there just aren’t a lot of notes to search for.  I am leaning towards the latter.

For what it is, this is a pretty good beer.  I like the idea more than I like the product itself.  It’s creative, crafty, and does make me feel like I am in a pre-mass-production-brewery world.  I don’t know what that world’s beer tasted like, but I imagine it is a lot like this.  The problem with that is, that beers have only gotten better and better according to the needs and wants of the public.  Yes, many old world beers still thrive today (I’m looking at you Franziskaner!), but as tastes change so do recipes.  I wish this beer was slightly less sour, and bitter.

Giving this a score I would go with a 75 or a C.  That may sound harsh, but to me it’s just kind of middle of the road.  Maybe I thought it was going to be something it could never live up to, but I don’t see myself ordering this again.  It’s bitter, in an off-putting way, and semi flat.  I could see this as an upper-class version of a Big Beer competitor.  Maybe I will grab a bottle, or 6, for the world cup.  St. Peter’s, soccer, and fish and chips seem like a pretty great trinity, but I can’t say that I’d make this my go-to order if it were on tap.