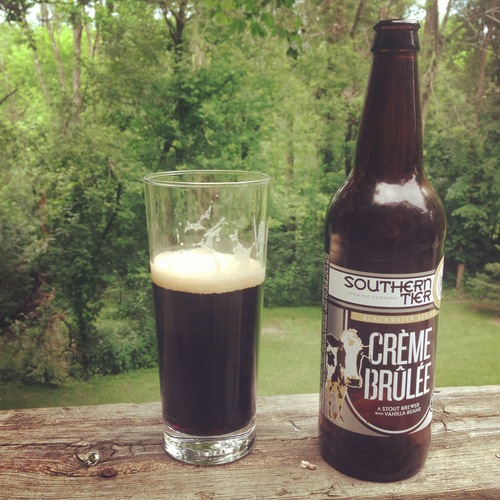 Southern Tier Brewing Company, known for their adventurous, flavorful releases (such as Pumpking) and interesting, complex brews (such as the Eurotrash Pilz), has released an interesting, different beer with Crème Brûlée.

So let’s get down to business: what did I think of this unique beer?

Appearance: Crème Brûlée is a very dark beer that is completely opaque. The beer has a lovely, thick white head and leaves a very light film on the glass as you drink it. It is everything you would hope a stout would look like.

Aroma: As soon as I took the first whiff of this brew, I instantly was taken to Baskin Robins ice cream parlor where I enjoy my favorite flavor: blueberry cheesecake. The resemblance was uncanny. Other flavors apparent include vanilla, ice cream, and other dessert-like foods. As far as smell is concerned, Southern Tier nailed it. The beer smells absolutely delicious.

Mouth Feel: Crème Brûlée has a very smooth and creamy mouth feel, which adds to the dessert-like quality. Very nice and inviting.

Taste: the beer is actually fairly complex. My initial reaction was that the beer was mildly bitter, but in a good way. I enjoyed the creaminess and the smoothness, and was pleasantly surprised by the slight bitterness.

The problem with this beer came when I swallowed it. Up to this point, I had enjoyed everything about the beer, but at the arguably most important point in a sip of beer – the swallow – I was drastically disappointed. As you swallow, a very odd and off-putting bitterness appears. My cousin and I did not enjoy the taste upon swallowing. However, the beer did have a slightly redeeming quality in the aftertaste.

The aftertaste leaves flavors of cheesecake and vanilla dessert on the palate, which is nice. The problem was, the more of Crème Brûlée I drank, the less I enjoyed it.

Final Thoughts: Overall, I would give this beer a 3/5 or a C. In my opinion, Southern Tier got Crème Brûlée half right. The aroma is spot on. It smells like a delicious dessert. Who wouldn’t love that?!

Where the beer goes wrong is the taste, which is a shame as that is what MOST beer drinkers are most concerned about. To me, the beer was far too bitter (and not in a good, I.P.A. way, but a strange, off-putting way).

I would suggest this beer to anyone who would love to have a drink with dessert. I can picture myself making a Crème Brûlée beer float with vanilla ice cream or sharing a glass with a slice of cheesecake. As far as ordering one at the bar, I would sadly have to pass.