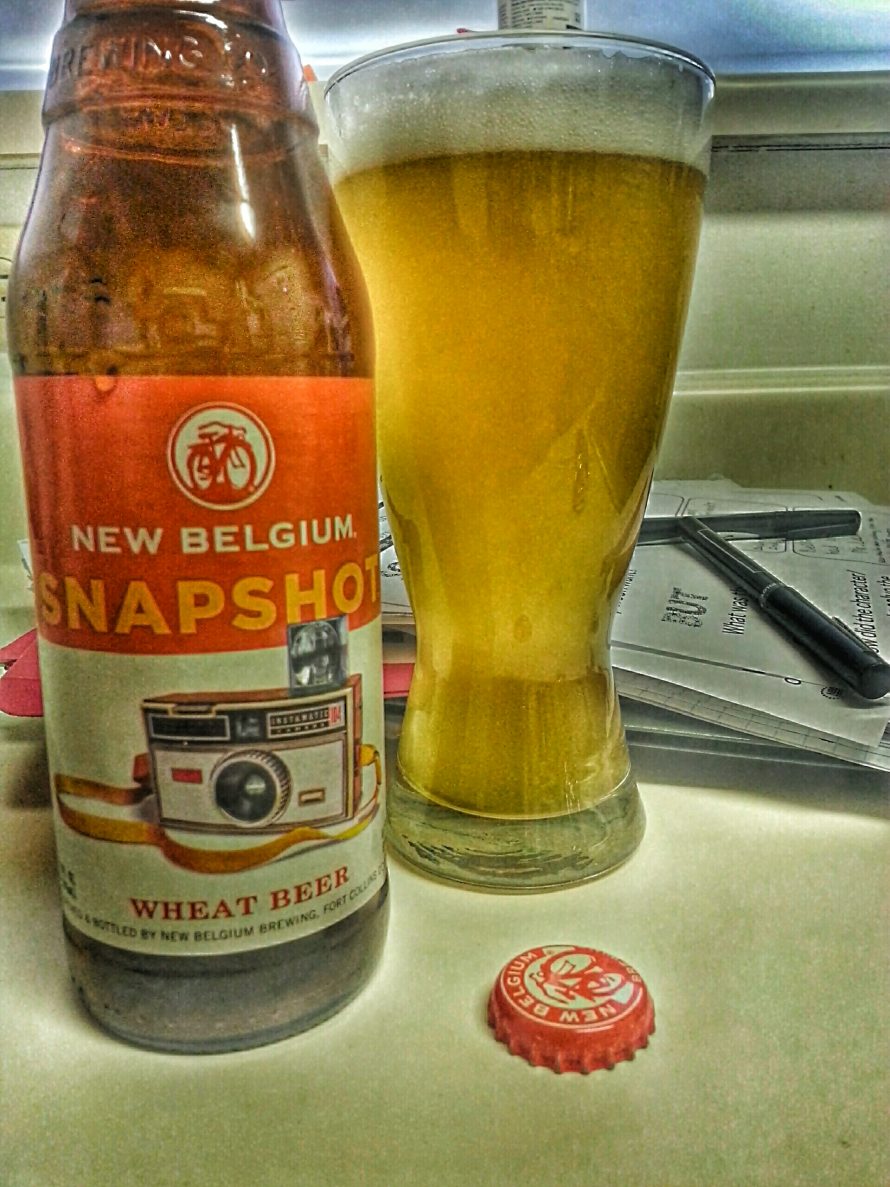 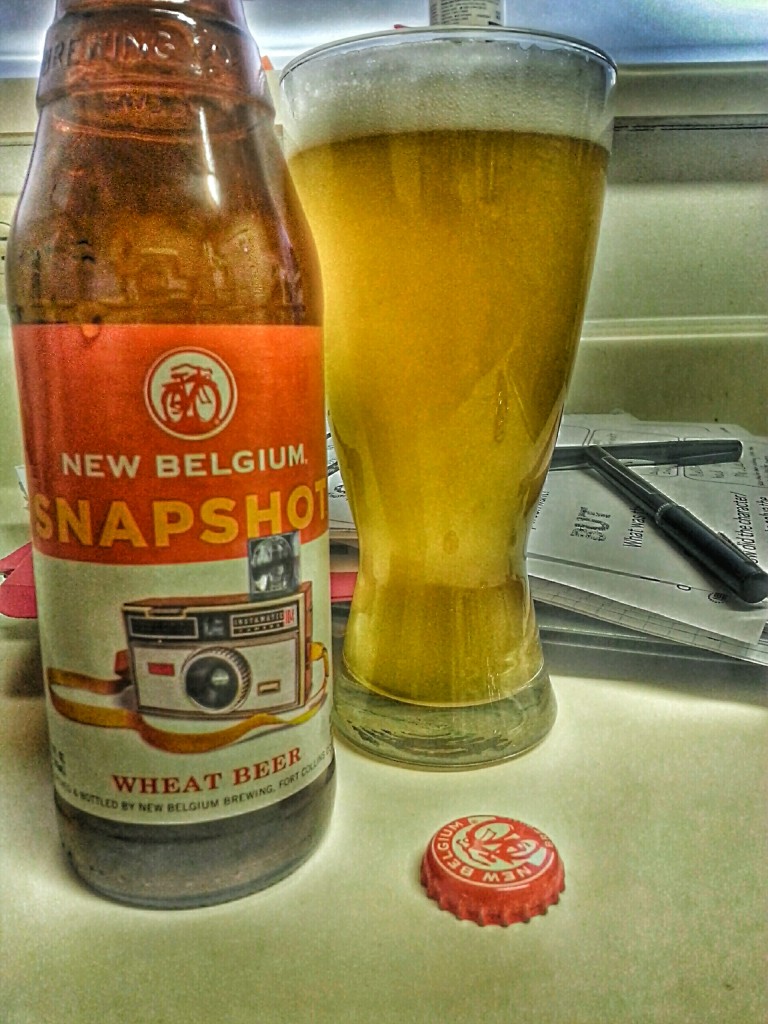 It’s March.  It’s March and we are having yet another snow day.  I’m not complaining, believe me, I’ll take as many days off as I can get, but this snow is getting ludicrous.  I’ve been cooped up grading papers for hours, and I need a break.  Luckily for me, I have a fridge full of beer just waiting to be tasted, and today’s winner is Snapshot by New Belgium.

Snapshot is kind of a trendy beer right now.  You can tell by the instamatic camera on the label, and the incredible, highly-filtered pictures of it you see online, that this is a beer hipsters will love.  I’ve even done my attempt at being trendy by adding as much drama and shadows to the picture above as possible.  Clearly, I should stick to I stick to writing and reviewing, not cell-phone photography.  But, I digress.

Back to the beer.  Snapshot is technically a wheat beer, and technically a hybrid beer.  What new Belgium has done is make one wort, and split that wort into two processes.  Most of it is treated like a regular wheat beer, but part of it is treated like a sour.  Then they mix these two together to create a beer with depth, character, and harmonious flavors.

This is the video New Belgium has on their website dedicated to Snapshot, explaining a bit more about their social-media-inspired label.

If there is ever a beer that is unfiltered, Snapshot is it!  This is a cloudy, opaque, straw-yellow beer that pours with a thick, pillowy, pure-white head.  The lacing clings to the glass like ice on my windshield.  If I squint, I can see the carbonation exploring the glass, but it’s not a big, lively beer based on looks.  Actually, Snapshot is exactly what I look for in a wheat beer, aesthetically.  It makes me feel like I’m in Germany getting a whit on draught.

The aroma on Snapshot is light, bready, and spicy.  There is a great wheat bite that reminds me of a beer made with rye.  The Cascade hops offer a lemon zest aroma as well.  It smells like it is going to be extremely clean, bright, and have a decent citric tartness.  This was brewed with wort that has Lacto added, which will add a sour characteristic.  This comes through on the aroma as well.  It’s like smelling a light beer mixed with Lemonheads candy.

I poured this pretty vigorously to get a big head on the beer, but in turn I think I lost some carbonation.  It is a smooth medium-bodied beer with almost a silky texture.  Snapshot has a interesting mouthfeel in the fact that it starts silky, and ends light, airy, and dry.

As the smell predicted, this is a wheat beer with a refreshing sour bite to it.  It starts very bright, with a clean, malty, wheat-bread flavor, and then ends citric, lemony and dry.  The ride this beer takes you on is enjoyable, until the aftertaste.  Snapshot has a stale, wet-husk flavor afterwards.  I get it less as I drink the beer, but the very first sip was like going up a roller coaster, coming back down,  and while I was screaming, laughing, and loving the ride, the car stopped and the ride broke down while I was still on it.   The good news is, with each sip I get less and less aftertaste allowing me to fully appreciate the complexity it has to offer.

I love wheat beers, and I love New Belgium, but this just isn’t a winner for me.  I respect it for being unique, fun, and technically advanced.  As I drink more sours, I realize just how hard it is to make a perfect sour beer.  This is technically only half of a sour ale, but I don’t think the sour side of it works for me.  I appreciate the dry tartness in the finish that compliments the bready, lemony wheat beer, but that aftertaste just ruined it for me.  That being said I’m going to give Sanpshot a C+, or an 80 (remember, we try to go by the more educationally strict 7 pt scale!).

Just because this is a C+ beer, doesn’t mean that it shouldn’t be consumed.  This would be a good beer for people to take to cookouts, or enjoyed with a citric ceviche. If you see it on tap, give it a try, but if they offer other New Belgium Beers, I’d suggest Ranger IPA or Fat Tire instead.