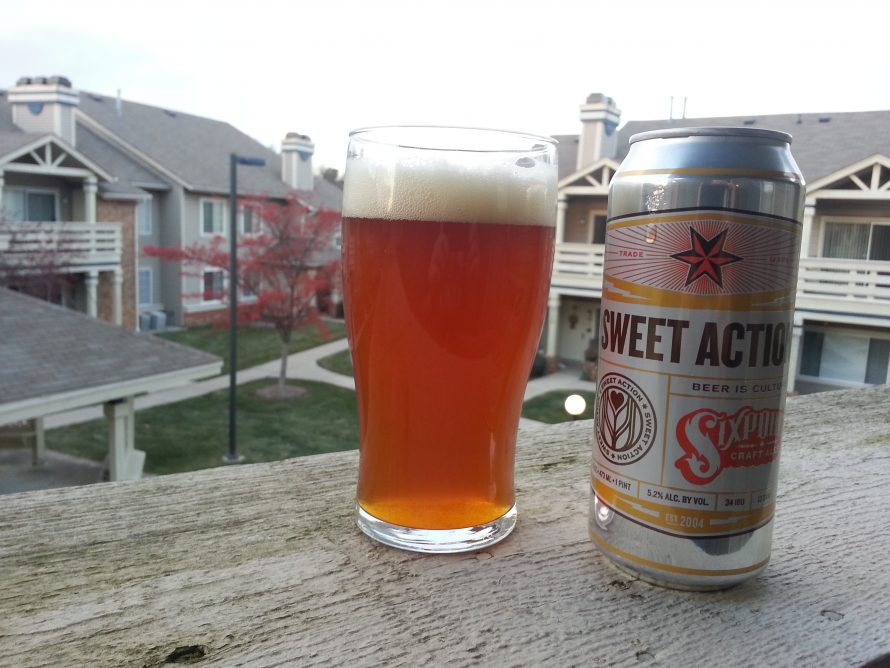 The other day, Ron explained to me the worst part about loving craft beer:  there isn’t enough time to have the same beer twice.  Sure you might be at a bar with a limited selection and order a known beer again, but if you really want to try everything, you have to just commit to drink outside of your comfort zone.  When I go shopping for a new beer to drink, that’s always in the back of my mind, and it’s how I stumbled upon Sweet Action by Sixpoint Craft Ales.

First, I love the packaging.  Beer in cans is a thing of the past, and a thing of the future.  Cans offer numerous benefits when compared to bottles, so when I saw cans of Sixpoint amongst the bottled selection my ears perked up.  This is probably a brewery ahead of the curve, and their beer should be bought.  So I perused the selection and came across Sweet Action.  I don’t know what kind of beer Sweet Action is, because it’s not labeled.  The description simply says:

“Sweet Action is an idea; a concept.  It is a simple representation of what makes beer great — the marriage of barley and hops in a harmonious balance of sweet and bitter.”

How can you not be intrigued?! So without further ado, let’s dive in.

Sweet Action Pours a deep, clear copper color, with a cloud-like light tan colored head.  When held up to the light, the bubbles cling to the glass giving it the appearance of copper colored Jell-O.  The beer is cloudy, but not opaque, and which makes me think this is going to be a fairly thick, sweet brew.

Layers of caramel and sour apple hit my nose first; hops and yeast follow.  This is a very complex aroma for me.  I get bready notes, and caramel malt, but also some fruitiness and citric hop flavors.  The smell is sweet, and reminds me a lot of Lagunitas Censored.

Sweet Action is not as thick as I anticipated, having a medium to thin mouthfeel and medium carbonation.  This beer will coat your mouth with layers of both sweet and bitter — sweet to start, bitter well after.  Alcohol is somewhat present, but it’s pretty faint.

Just as I expected, this is a very complex brew.  No one taste overpowers the other.  There is light sweetness from the malt, some tart, almost peach-like undertones, and citrusy/floral hop flavors.  As it promised, this beer is perfectly balanced between sweet and bitter.  The hops linger longer than any other flavor.  It’s almost as if they’re an afterthought;  just waiting until you forget what the beer tasted like.  I can’t think of another beer I’ve had that comes at you in waves like this does — very cool.  With only a 5.2% ABV, I wouldn’t think this beer would be “boozy”, but to me it is, and it’s a little off-putting.

Sweet Action delivers on everything it promised.  There is no way to describe this beer because it doesn’t quite fit into a category.  I’ve read that the brewers describe it as part ale, part wheat, part cream-ale.  That’s really a great way to look at it.  It is a mixture of styles and flavors, and I appreciate their way of thinking.  I think that too often we put beer into categories, and try to create or judge them based off of different beers from that same style.  Six Point just made a great beer with the characteristics they wanted: sweet, malty, tart, fruity, hoppy, balanced.

I don’t feel that I raved about this beer to show how much I like it.  I think it’s a 91 beer, or a B+.  I can see some points where I’d like to improve on this beer, but maybe that’s just me trying to fit it into a certain style; into something I’m familiar with.  It’s flavorful and balanced, but lacks the “wow” factor I’m used to from craft ales.  I can see myself ordering this on tap, buying a Six Point sample pack, or even just throwing another Sweet Action into a “build-your-own six pack” next time I’m at the store.  It would go great with a brat off the grill, or even a grilled chicken salad; a very versatile beer for any occasion.  If you see this on the shelves, pick it up, you won’t be disappointed.