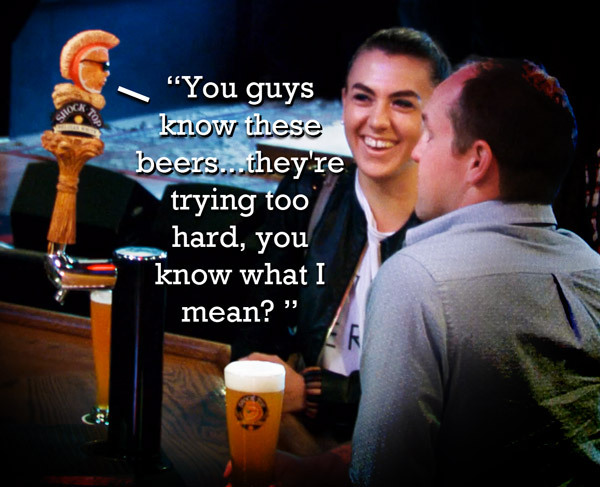 Last week, my friend Steven and I visited Maumee Bay for an evening of drinks on their out-door terrace space. Steven is not a big drinker by any means, and is just starting to get into craft beer, albeit slowly and carefully. He asked for my thoughts on Blue Moon, saying that it was the only craft beer he usually sees at bars and restaurants. Now, full disclosure, I enjoy Blue Moon. I think it tastes great, but I am fully aware that most would not consider Blue Moon to be Craft Beer (To the annoyance and displeasure of Blue Moon brewers)Steve and I began discussing the difference between Craft Beer and “Crafty” Beer made by the big-boys, disguised as craft. Not so surprisingly, our conversation included brands such as Magic Hat and coincidentally, Shock Top

This morning, I was linked to an awesome article by the BeerandWhiskeyBros.com website detailing the new ad campaign for Shock Top “Brewing Company”. I had to watch the videos for myself, and all I can really say upon doing so is “wow”. To me, it comes off as a hyper-pathetic attempt to discredit craft beers, craft breweries, and really discredit beer drinkers who enjoy discussing the beer they are drinking!

The lead-character in the Shock Top videos is their mascot Wedgehead. A super-cool orange slice with a killer pair of shades. Wedgehead is a jack-of-all-trades; he is a total bro that any self-respecting, beer drinking guy would like to hang with, he is a total ladies-man, talking mad game to the single ladies at the bar at which he resides, and the ultimate beer salesman. He is cocky, witty, charming and offensive. I won’t lie, I found some of the ads to be entertaining, but by the end of the video, where Wedgehead gives the new slogan; “You know I’m a good beer, I know I’m a good beer, We don’t have to talk about it, let’s chat about something else”. I felt that it was just a little desperate on the part of Shock Top.

Their tagline, their commercials, EVERYTHING about Shock Top in my opinion, is pretty indicative of big-beer’s new marketing strategy against the rising-tide of craft beers and breweries; discredit, poke fun at, make snobs of craft beer drinkers and craft breweries who spend too much time talking about the beer, and not enough time drinking it. (I do plenty of both, however). At one point, Wedgehead says “I was trying to talk to my buddies, but (the surrounding six-packs) won’t talk to me; they have corks, dipped in candle wax….pick me up, let’s party”. I know that craft beer drinkers, and sometimes even I can be a bit snobbish, but isn’t that a little part of the magic of craft beer?

One of my biggest issues with Shock Top’s new ad campaign is who is in their commercials. Shock Top does a nice job of including pretty much every walk of life in the ad, but the inclusion of the bearded male and the obviously tattooed girl with bedazzled nipple shirt makes it obvious that these were not random acts caught on tape, but staged events that play to stereotypes of craft beer drinkers. Maybe I’m a little too sensitive or looking too far into the campaign, but it just rubs me the wrong way, and reeks of Shock Top trying to convince consumers they are truly craft beer.

One of my fiance’s biggest pet-peeves is when I spend an hour carefully perusing the shelves of my local bottle shop, looking for the perfect selection. This stupid citrus slice makes a humorous quip to a perspective buyer saying “You’re not solving world peace, you’re picking a beer, relax!” Trust me, I know that beer is not all that serious, but it just seems to me another attempt to discredit those who do appreciate beer.

Some people will argue that Wedgehead is highlighting a very real and valid point; craft beer drinkers DO take themselves and beer-drinking too seriously, and that perhaps we should all lighten up. Truthfully, if we did a blind taste-test of other Belgian Whits compared to Shock Top, and somehow Shock Top were to win, what would that mean for craft beer? Is it then okay to classify Shock Top as craft beer?

What do you think about Shock Top’s new ad campaign? Do you find it humorous? Do you find it annoying and somewhat offensive? Is it a clear attempt by the big-guys of beer at trying to discredit beer drinkers and pass off their beer as the “every-man’s” craft brew? Let us know in the comments below, or chime in over on our Facebook and Twitter feeds! You can find all of the Shock Top youtube videos below.