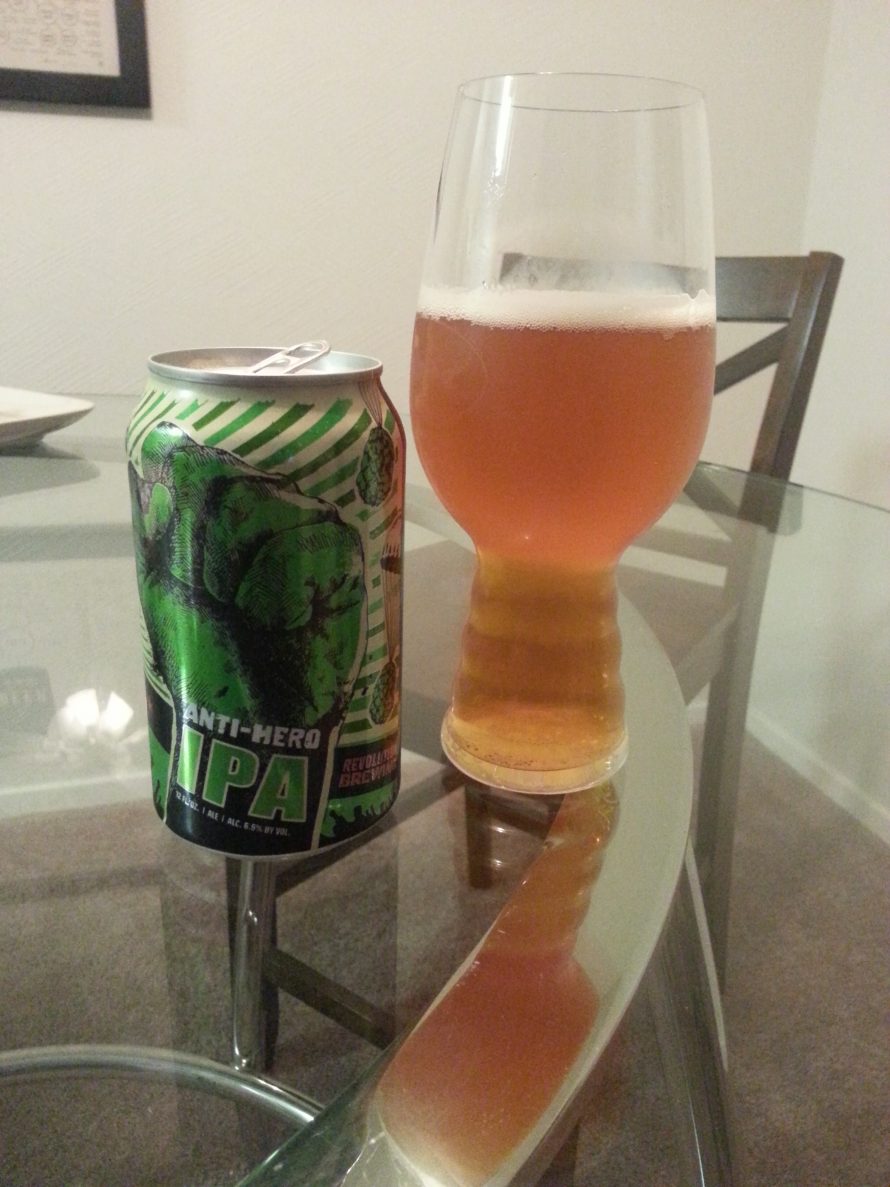 While I was in the process of ordering Daisy Cutter, I remembered my trip to Revolution Brewery.  I have only sampled their beer one time, but of all the places I went in Chicago, this brewery had to be my favorite.  From the industrial atmosphere of the pub, to the aggressive tap handles in the shape of revolting fists, to the bacon-parmesan-rosemary popcorn, I loved every part of my experience before I even tasted the brews.  But of course I had to get a flight of their top hits, and of them the one that stood out was Anti-Hero IPA.  So, I broke out my credit card and added a six pack to my tab.

Anti-Hero pours a deep copper with a thick, fluffy, white head.  It is slightly cloudy, but not in an off-putting way. Holding it up to light, it’s as if it wants to let the light through, but can’t — like a cloud holding back a sunset.   The only truly disappointing part of the appearance is the fact that the head has dissipated after only a short while of sitting.

Revolution calls Anti-Hero a “Hop Assault” which, based on smell alone, is right on.  This thing smells incredible.  The first word I think of is “juicy”.  It has a huge citrusy-hop aroma which lures me in screaming, “drink me!”  It smells sweet like crystal malts, but the biggest notes I get are the pungent, fruity hops.

While the head is almost gone, the carbonation certainly is not.  It is perfectly fizzy and bubbly on the tongue, accentuating the bitterness of the hops.  Anti-Hero has a medium body, which leaves your mouth slightly sticky the same way a sugary soda would.  There is no real alcoholic presence  to this beer (surprising for 6.5% ABV) which leaves it refreshing and very drinkable.

Talk about balance!  This beer is just as sweet as it is bitter, yet neither are the lasting taste you get.  What I taste most is just massive hop flavor.  Yes the malts balance it out with an almost honey-like sweetness, but it is just as juicy and grapefruit-tasting as I hoped.  It’s almost like I’m not drinking an IPA at all, but rather Hop pop, and, for a self-proclaimed hop head, this is a beautiful thing.

Anti-Hero reminded me why I loved my visit to the brewery so much.  Its one thing to create a great experience for drinking beer, but its another thing to actually make amazing brews. Luckily for me, Revolution Brewing knows how to do both.

This is an impeccable example of an American IPA.  If I were to score it, I’d give it a 4.9 out of 5, or an A+.  I can only take a tenth of a point off for lack of head retention which would have made the aroma that much better.

I usually try to recommend a time or meal to drink a beer with, but with Anti-Hero, I’d say just drink it as soon as you can! It really is that good.  I am not sure that I’ve had a beer this balanced and drinkable while retaining this much delicious hop flavor.  If I had to give a meal to eat this with, it’d be something fairly light, like chicken, or fish tacos.  Something where the citrus of the beer would compliment the lightness of the dish.  But, please, do yourself a favor and get this beer next time you see it, it is worth the investment.