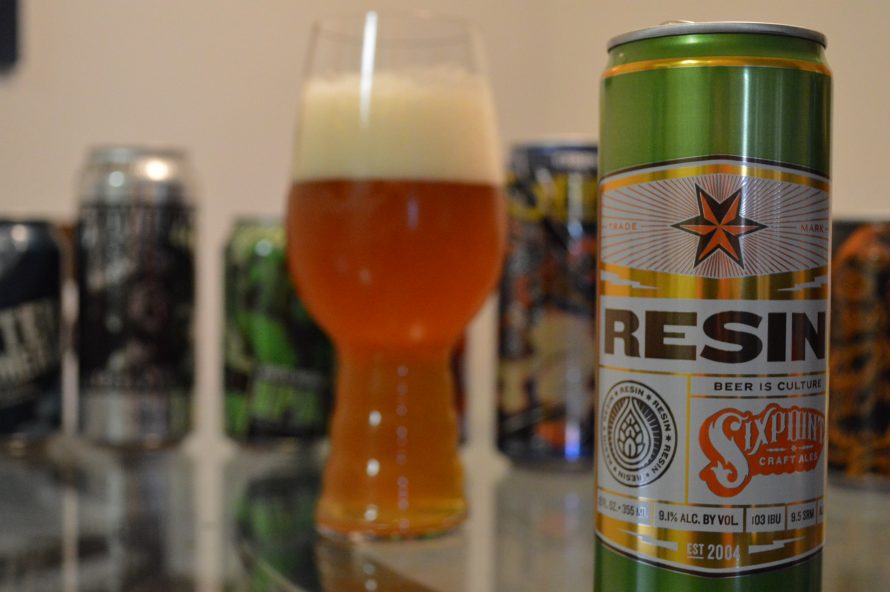 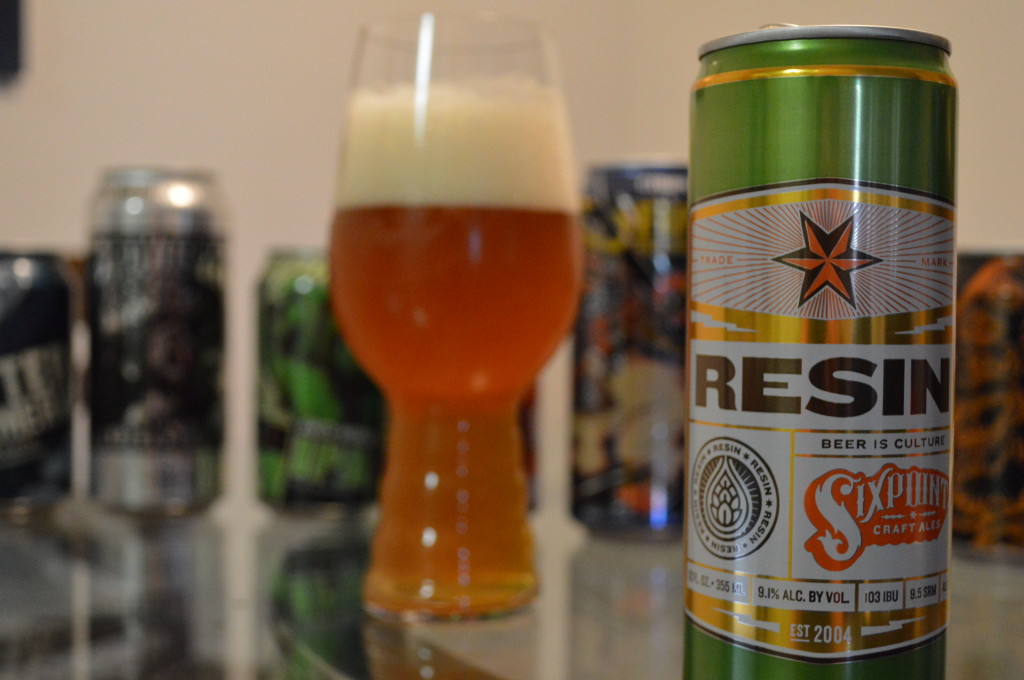 Cans: I love them, many hate them.  The informed consumer understands that it is wise for a brewery to use cans.  You’ve heard it on this site plenty before, so I’m not going to get into all of the details again.  What I will say, is that I’ve taken a challenge upon myself to seek out amazing craft beers in cans.  When anyone tries this challenge, it is hard to ignore the presence of Sixpoint Brewery.  From a marketing standpoint, they’re the definition of consistency.  Look at their beers lined up side by side, and notice how logos, lables, and overall art design is almost identical from can to can, the only difference being color and name.  From a beer standpoint, the most important standpoint in my mind, they do nothing but deliver delicious beer time and time again.  Today’s brew is Sixpoint’s Resin.

The Masterful Consistent Marketing of Sixpoint

Resin is Sixpoint’s IPA, and its celebration of everything hops.  They named the beer after the resinous profile of the hops they use, heck, they even made the can green to imitate the leaves on beer’s botanical benefactor.  Coming in at 9.1 ABV, and 103 IBU, it’s easy to see why they chose to put Resin in the skinnier 12 ounce can– this hop bomb is no slouch.  That being said, let’s take a look at Sixpoint Brewery’s Resin.

My first thought is that this beer is simply beautiful.  It’s everything an IPA should be.  Orange to yellow orange in color, fresh and hazy, with a huge, off-white head.  The beer looks like the sun setting behind a screen of clouds.  You get the brilliant candied orange color, but light will not go through.  It’s so cloudy that it’s hard to see the carbonation making its way out of the beer.

Sometimes beers are named too well, Resin is one of those beers.  Based on smell alone, I can tell that this is going to be a big, bitter, piney, and, well, resinous.  The alcohol is present, but muted, the malt smells a bit like saltine crackers, but what really jumps out are those juicy, herbal hops.  There’s a bit of an orange peel aroma, and small amounts of grapefruit pith.   After one swirl of the beer, the alcohol exploded out of the glass.  I’m afraid the booze is going to overpower more than it should, but there’s only one way to find out!

Resin is a full bodied beer.  Carbonation is perfect, it’s present but not too high, and the sugary sweetness of the malt is balanced well by the bitterness of the brew.  There is a great deal of “warmth” on the swallow, the alcohol is trying to hide, but doesn’t quite succeed here.  While the finish is warm in terms of alcohol, in terms of flavors, it is subtle and nice.  It really rounds out well and leaves no lingering bitterness.

This one is new for me — I’m not sure if I’m tasting alcohol, or hop resin, or just a well mixed version of both.  What I do know is that the first sip hits hard.  In a way it’s like drinking a highly muted version of gin, there’s herbal and botanical qualities from the hops that remind me of pine needles, and the alcohol burn is felt screaming into my chest.  Grapefruit pith is another main player in the flavor of Resin, it’s bitter and bold, but backs away quickly.  I think the bready, sweet maltiness really plays well with the big hop character allowing this to not be a beer so bitter that it loses all drinkability.

Resin is the beer world’s equivalent of Warning Track Power in baseball.  At first, flavors explode onto my tongue (like the ball off of the bat), making me think that this is going to be one of those giant Double IPA’s that bitters my mouth and destroys my palate (it looks like a home run!).  But, after the swallow, it finishes so clean that I feel like I just sipped on a session IPA (the ball lands short of the outfield fence, nothing but a long fly ball).

Beer in a can is a wonderful thing, and Resin is a wonderful beer.  It is flavorful, yet deceptively drinkable.  While I did get some alcohol bite, the thing that kept me coming back was the downright delicious hop profile built into this brew.  I’m going to give Resin a 92, A-.  It’s a good beer, hell, it’s a great beer.  It took me on an IPA voyage that I haven’t been on before.  I’ve never had a beer that hit me so hard, and then backed away so quickly in my life.  It’s as if all of the flavor is released during the swallow, but I’d prefer to have full flavor from start to finish.  If you see Resin, or any other Sixpoint beer for that matter, give it a try, I promise you’ll like it.

Agree with this review, or do you think Resin falls somewhere else on your ranking scale?  Leave comments below, we’d love to hear them!