It was late, the Beer Temple closed in under an hour, and I was in a hurry to get to my friends house since he was waiting for us to eat dinner.  But some things just shouldn’t be rushed, like picking out a great beer.  I knew I had to be decisive, so I went in asking Beer Temple owner, and Brew Review Crew sensei, Chris Quinn what was great that I can’t get in Ohio.  His response, “If you like a hoppy pale ale, go with Firestone Walker’s Pale 31”.  Chris could tell me to drink mashed up meal worms and I’d gladly oblige.  With a six-pack of Pale 31 in hand, and a box full of other non-Ohio brews, I made my way on to my next stop.

I will admit, I cracked open my first Pale 31 at the fantasy football draft for the league that Ron and I are in, but I’m just now sitting down to do a formal review.  I planned on doing a review between picks, but, you know, with the 8th pick in the draft, I had to get creative to stay competitive.  Digressions aside, Pale 31 is a pale ale from Firestone Walker that is supposed to be an homage to the 31st state of the Union, California.  It’s a pale ale with Floral and citrus notes, showing off the “bold yet approachable spirit that embodies [California].”  Let’s see if this pale ale lives up to that lofty goal.

Pale 31 is just that, pale!  It’s a mostly-clear beer that somewhat resembles diluted honey.  It’s as if someone took the color of a graham cracker and made it into a drink.  To be honest, it’s exactly the color I want a Pale Ale to be, not too dark, but not yellow, either.  As far as head retention is concerned, there is very little.  Some lacing tries to stick around the circumference of the beer, but it poured with almost no foam.  In the little lacing I do see, I can tell that this was most likely not bottle conditioned; the CO2 bubbles are big and bulbous.

Like the appearance, the first thing I smell is diluted honey.  It’s sweet fruity, but slightly bitter, too.  Notes of bitter orange peel and floral hops mingle perfectly with the crackery malt.  The smell isn’t too intense, but it hints towards deep and harmonious flavors.  No alcohol is present, and at 4.9% ABV, that’s a great sign. 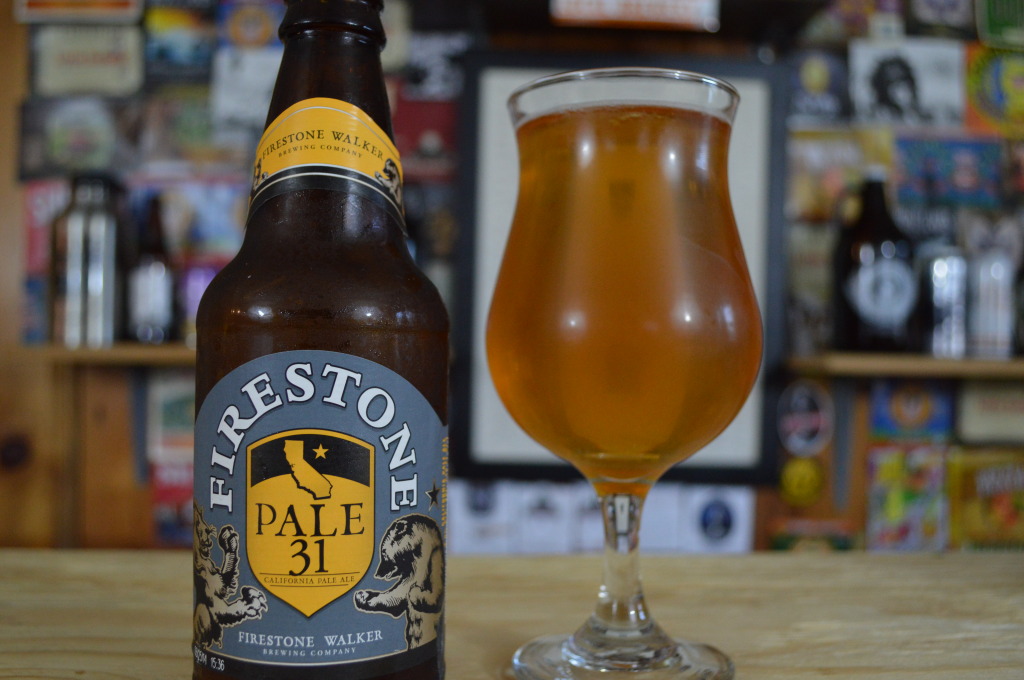 As I mentioned in my appearance section, I can’t believe that Pale 31 is bottle conditioned.  The bubbles scrape your throat in the same way that chugging Surge does.  The beer also comes in a tad thin.  Actually, by mouthfeel and alcohol content, this probably could be classified as a session ale, but I know that’s not the intent.

Pale 31 is just what I’d want out of a West-Coast style IPA, only with the hops dialed back to the point that it’s just a Pale Ale.  It’s light, crisp, refreshing, and the sweetness and bitterness share the spotlight perfectly.  The hops give off a big citrus flavor, mainly grapefruit and bitter orange pith.  The malt, surprisingly, is overpowered by the hop notes, but some light-toasted cracker flavors are evident.  Tangerine and honey flavors come in at the end, but the defining aftertaste is a lingering bitter.  I mention orange pith because this beer leaves your tastebuds feeling the same way as if you just bit into a tangerine rind.  Bitterness sits on the back of your tongue, and it doesn’t move.

It’s hard to argue with Chris Quinn, and it’s hard to deny the greatness that is Firestone Walker.  They just make great beer.  Pale 31 is no exception.  Go the the beach, lay in the sun, or drink a Pale 31 on a brisk fall night, you wont be mad that you did.  It is loaded with flavor, yet made with a deft hand.  I’m giving Pale 31 a 91, A-.  Part of me wishes that the bitterness faded away quicker, and part of me wishes that there was more body to the beer, but the flavors here are on point.

Pair a Pale 31 with your next helping of cilantro and lime smothered fish tacos, and you’ll never look back.  This is a winner, and just goes to prove that if you want a great beer, just ask Chris!