When perusing my local bottle shop, I often pass bomber sized bottles with fun frogs on the label. They have interesting names like B.O.R.I.S. the Crusher and Hoppin’ to Heaven IPA, as well as fun and festive holiday style brews with equally fun names and labels. Then my eye makes its way to the price-tag. These beers are not cheap. They range from the $9.00 mark all the way into the teens. Being a teacher by trade, I rarely have the disposable income to enjoy such artisan beers, but my brain screams for them! I thought, what better way to experience some of these beers than to go straight to the source; Hoppin’ Frog Brewery out of Akron, Ohio. 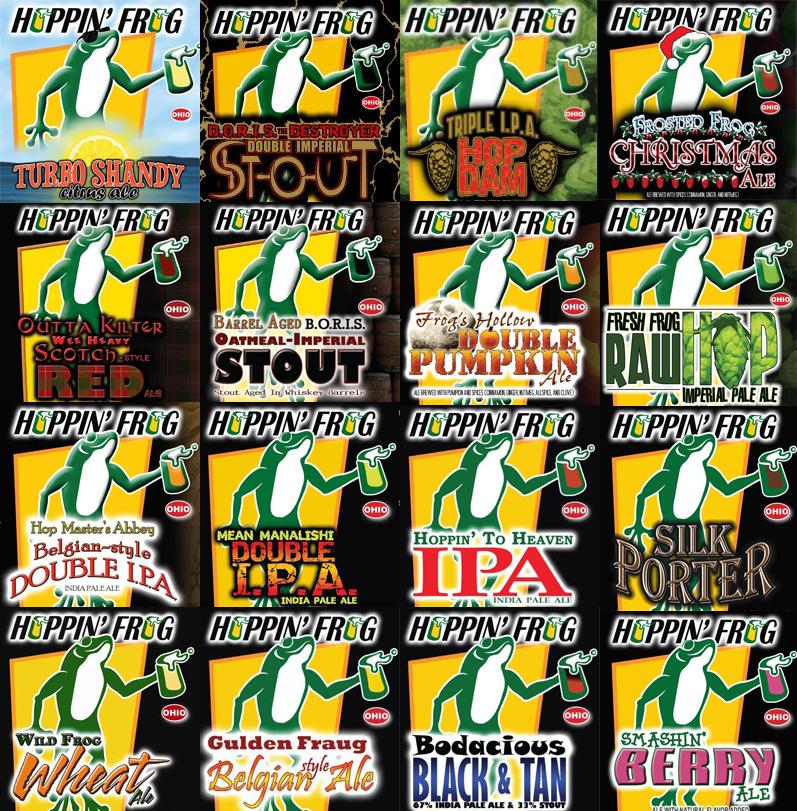 As we were driving, we passed the brewery two times and didn’t even know it! It is quietly tucked off the side of the highway in an old Self Storage facility. I wasn’t sure what to expect when we pulled in, as it is not the most aesthetically pleasing building, but I was pleasantly surprised by the high quality of the tasting room. 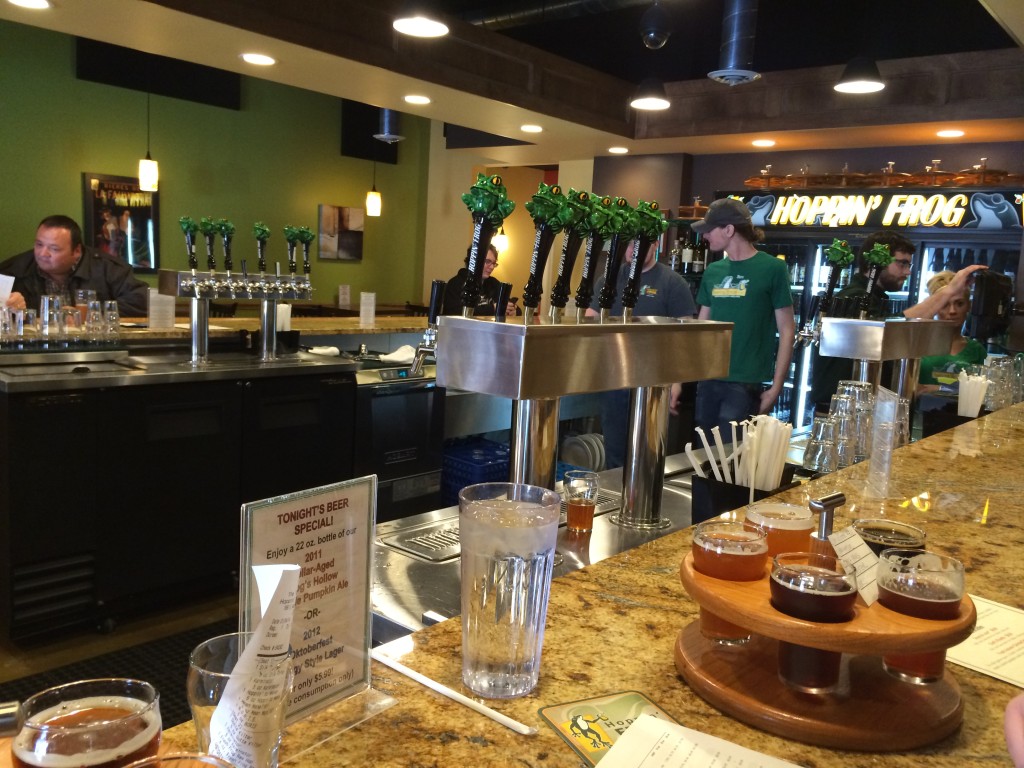 Immediately upon entering, we were met by a friendly staff of ladies who were extremely knowledgable, friendly, and helpful! They set us up with two flights of their beers and brought the Brewmaster and Owner, Fred Karm, over to the bar where we sat, where we enjoyed an amazing conversation about the brewery, his personal journey to this point, and of course, their beer. 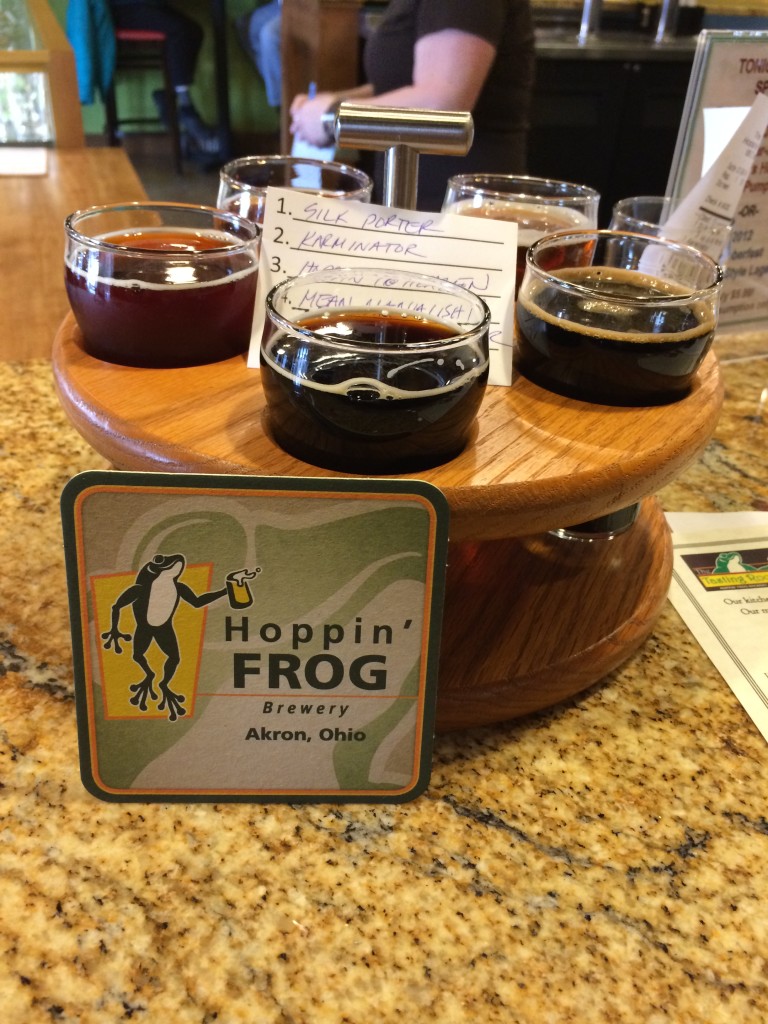 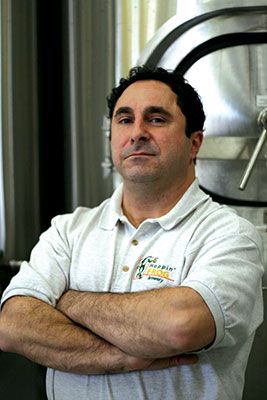 Fred Karn, an electrical engineer by trade, got into the craft beer industry like most other brewmasters; home brewing. He admitted to us that his first endeavor of home brewing was not enjoyable for him, in fact, he noted that he never wanted to do it again. It was not until he was able to sample the fruits of his labor that he realized how amazing craft beer could be! Soon after, he won a bag of home-brew supplies as a door prize at a home-brew meeting, and with that, history was set in motion. He proudly told us that he had about 180 batches under his belt when he helped found what is today Thirsty Dog Brewing Company (also in Akron). As time went on, things at Thirsty Dog were changing and he took the biggest risk of his life; starting his own company.

He began Hoppin’ Frog in 2006, and told us about the many workdays that began at 3:00 AM and ended at 8:00 PM. He told us about how crazy things were at the beginning and how he worked hard just to keep his head above water. It was his philosophy that separated him from so many others in craft beer; quality over quantity.

We were absolutely shocked to hear that Hoppin’ Frog is brewing on just a 10 barrel system. That is extremely small for the insane demand that there is for his beer. We have been noticing that the problem (if you can call it a problem) is that so many of these craft breweries are having problems keeping up with the demand of their consumers. With a 10 barrel system, Fred encounters that with almost every release. Fred’s philosophy is simple; make every ounce count.

With only a 10 barrel system, Fred knows that his quantity is going to be extremely limited, so his answer to that seemingly huge issue is that he creates the absolute best beer he can possibly make, which I would argue has been an astronomical success. Hoppin’ Frog has been the recipient of numerous awards, none of which are more impressive than winning Gold at G.A.B.F. as well as the International Beer Festival. You can see more of his awards here. 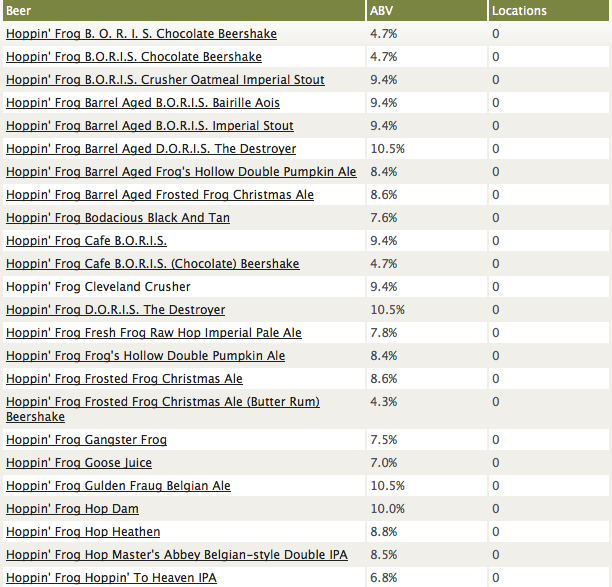 We were able to try 10 of their beers, which as you can see in the image above (captured from TapHunter) none of their beers are below 6.8% ABV. In other words, their beers are huge. It is definitely the trend in American craft beer right now for brewers to go BIG in their beers. We are seeing that upward trend with Double IPAs, Barrel Aged beers that have huge ABVs, etc. Fred has gone all in as far as that goes!

The beers we sampled were delicious. Even B.O.R.I.S. and D.O.R.I.S. were enjoyable for me (I am usually a wimp when it comes to beers near or over 10%). It was no surprise to me to find out that Hoppin’ Frog is distributed in 19 states and even internationally in over 15 different countries! This is a huge source of pride and accomplishment for Fred, and it is truly amazing considering their limited production size.

Another fun thing that Hoppin’ Frog does is that they tap other brewers’ beers for special limited release at their taproom. We were lucky enough to be on hand for the tapping of Three Floyds’ Dreadnaught Double IPA, which was absolutely fantastic. It did strike me as curious though, that a brewer would invite other competition into their own taproom, even making special announcements to the crowd to try it! I asked Fred what his motivation was for this and the answer was pretty simple; he wants his beer next to that competition to see where they measure up. He takes great pride when his beers “Crush the opponent” in his terms, but also acknowledges that sometimes his own brews take the crushing. He finds inspiration and incentive to become a better brewer by doing this, and I for one think it is a very cool idea.

In conclusion, we had a terrific time spending our afternoon at Hoppin’ Frog and speaking with Fred and his awesome staff. We really hope that you take a special trip to get over there, as they were rated the 17th Best Brewery in the WORLD by RateBeer for 2013, as well as the best Brewery/Beer in Ohio for 2013. If you are a fan of Ohio craft beer, or just craft beer in general, you owe it to yourself to make a drive over to Akron. If you see bottles of Hoppin’ Frog in your local bottle shop, don’t be put off by the price. Be confident that you are spending your hard-earned money on a beer and a brewery that “makes every ounce count”.