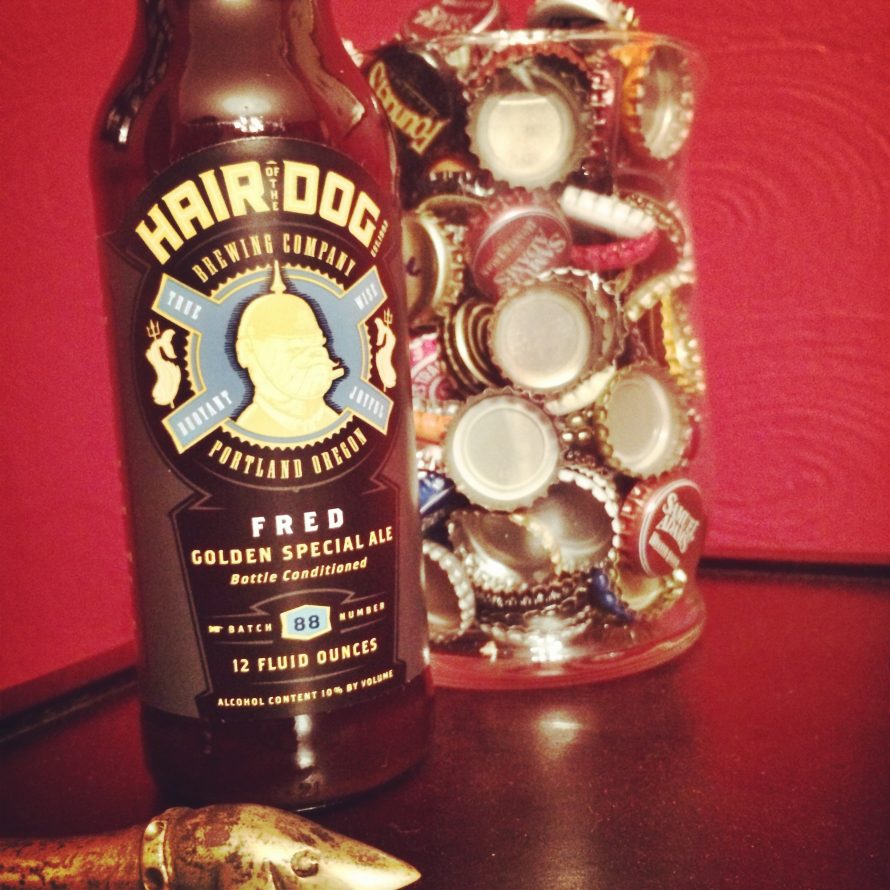 Hair of the Dog: Fred 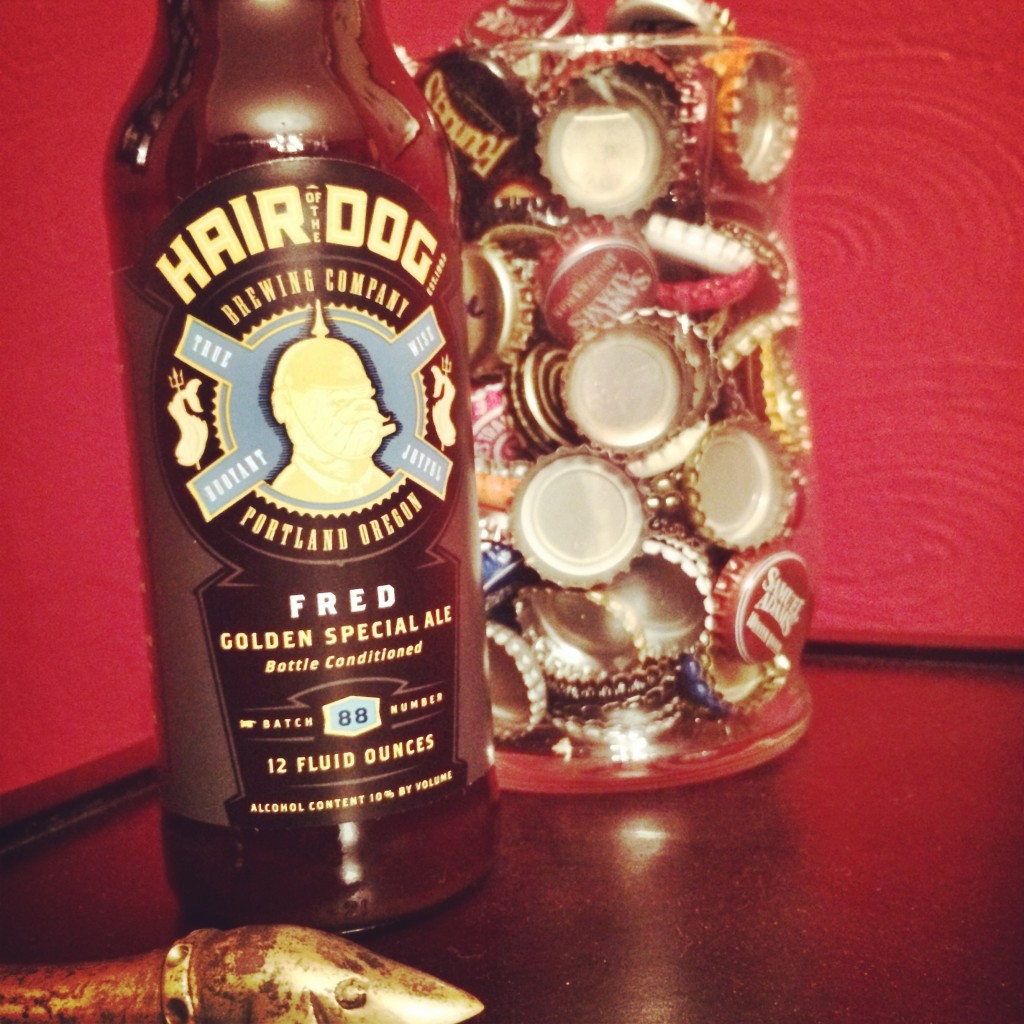 I have a problem; I have too much beer in my fridge. Perhaps you (and secretly I) think that is more of a blessing than a problem, my fiancé disagrees, therefore, it is a problem. I’ve made a promise to not buy or trade for any more beer until I drink everything in the fridge. Tonight’s selection is from a beer trade I completed a few months back with a good man out in Reddit land. He resides in Seattle, so he hooked me up with some fantastic West-Coast-ish brews. One of my favorites that he sent me was Boulevard’s Bourbon Barrel Quad, which we loved, so I am hoping this is another winner.

Fred, from Hair of the Dog is a “Golden Special Ale” also known as an American Strong Ale. Coming in at 10% ABV, this is a big-boy! I am not the biggest fan of strong ales, so let that be known right away. I will do my best to be objective to my personal preferences, and dive into this whole-heartedly fully anticipating and expecting to love this!

Here is what Hair of the Dog has to say about Fred: “Fred was created to honor beer writer and historian Fred Eckhardt. Fred is a big inspiration for me and many other brewers. Fred’s work in all-grain brewing and beer styles helped me become a better brewer. Fred the beer is a deep golden color. It is made with aromatic and rye malts and includes 10 different hop varieties in an effort to incorporate the whole world into this beer. It has 10% alcohol by volume and 65 IBUs. We hope that Fred will inspire you to share your knowledge with others as Fred has with us.” 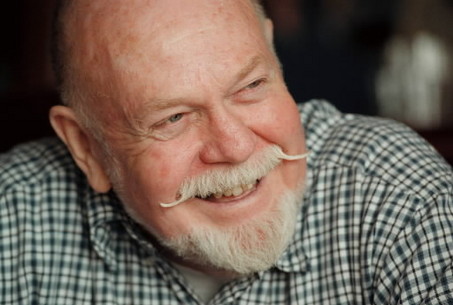 That is a really neat story, and I love that this beer was made to honor a legend in craft beer, who, let’s face it; looks like he is a great time just waiting to happen. Without further ado, lets check out what I thought of Fred.

Right off the bat, I was a little worried that some C02 escaped my bottle as their was no head at all, well, extremely small to be more accurate. Knowing that it was 10% ABV, I knew not to expect a lot of head, but I was shocked to see just how little there actually was! The beer is a dark orange color with rust hues. The alcohol is visibly sticking to the glass, and being bottle conditioned, there is plenty of yeast sediment to go around! Overall, it is a very pretty and attractive brew. 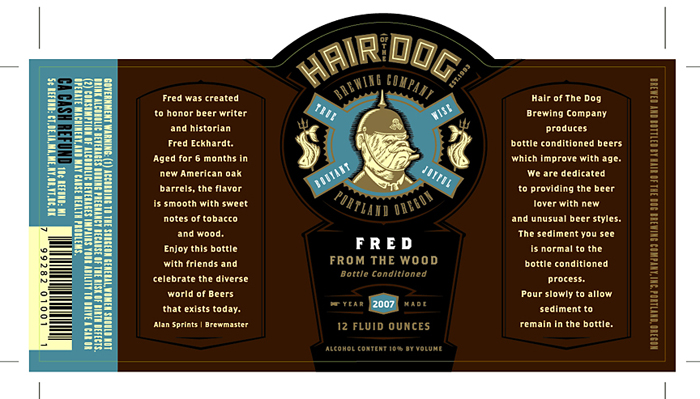 Whew! The alcohol is smacking me right in the face. This is going to be dangerous! As I acclimate to the strong alcohol presence, I am also picking up really rich and strong dark fruit character; plums, raisons, figs, etc. This smells like a very full flavored beer, and I am very excited to get into this.

This beer has a very interesting taste. One one hand, it IS extremely high in alcohol content, and there is no hiding that fact. The is a slight burn going down, but you really taste it in the mouth. I do get a lot of those dark fruit flavors that I got on the aroma, which is very flavorful. Unfortunately, my bottle was very under carbonated. There is absolutely no life to the mouth feel at all, which I can’t imagine was the goal of Hair of the Dog. There is a sweetness that is coming from the yeast sediment which gives an extra little something to this one. I actually pick up hints of Jack Daniels whiskey or maybe a sherry. A sweet liquor flavor comes through.

Unfortunately, I experienced a little bit of what I believe to be an off-flavor. In the middle of the mouth, there is a strange clay-like taste. It tastes almost like cardboard or, like I said, clay, or maybe paper? It comes off as a little thin and a little off-putting. It’s really unfortunate because in a way, it is ruining the experience for me. I won’t say it is bad, but like I mentioned before, it just isn’t for me.

Overall, I give Fred a 72, or a C-. Before you slice off my head and put it on a stake, let me explain myself.

What I really love about this beer is the whole story behind it. I really like how they put this out in batches, and while I drank batch #88, the brewer still has some beer from batch #1, brewed all the way back in 1997! The flavors are still changing and offering new experiences, which I just think is the bee’s knees!

While the aroma is really powerful and full of rich flavors of dark fruits, the flavor just did not come through for me. It is very unbalanced, which I understand is part of the style profile, at least in terms of alcohol presence. My particular beer was flat and had a strange cardboard flavor.

I’ll say this about Fred; it is complex. There are a lot of aromas and flavors going on in there, which I can absolutely appreciate. Unfortunately, the things going on, didn’t work for me.

I love Hair of the Dog just from what I have read about them and what friends have told me. I am sure that they craft tremendous beverages, this one just wasn’t my cup of tea….erm…glass of beer.

After tasting my glass, I did a little research on other ratings, and this beer is very highly rated by craft beer enthusiasts all of the world, so I am guessing this a case of a bad bottle. I would be really interested to try this beer again, and hopefully discover all of the wonderful things others have about Fred.