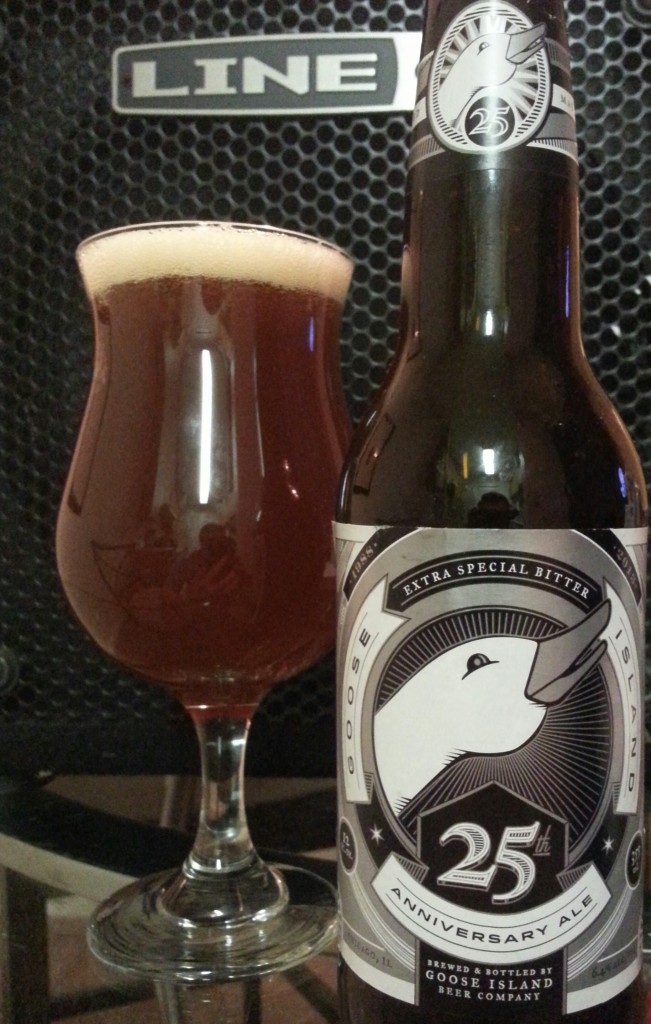 The holidays are a great time to get people to try new beers.  Thanksgiving at my house involves over 20 people, all who want good beer with their Turkey dinner.  One tradition we have is to go to the local store (which happens to have a pretty great beer aisle) and get a wide variety of brews for the family.  Normally, we go with some type of winter or Christmas ale, but when I saw the Goose Island 25th Anniversary ESB, I knew I had to get it.

I think Ron and I have the same problem: we find one place in the world that beer is brewed and we fall in love with it.  For Ron that place is the state of Michigan; for me, it’s Chicago.  I haven’t gone to a brewery in the Windy City that has been even slightly disappointing.  The perennial king of beer in Chicago has to be Goose Island.  I have loved everything I’ve had from them, and their 312 Urban Wheat ale is one of those “stepping stone” beers that really got me out of Domestic Lagers, and into craft beer.  All that being said, how could I turn down the beer they made to commemorate their 25th anniversary of being a brewery? Plus, I can’t help but think this is a limited release that I won’t find again in the near future.

This beer is about as deep of an amber color as you can get.  It’s beautiful.  It is somehow murky and clear at the same time.  It’s as if the edges of the beer want to let light through, but nothing in the middle will.  I can’t even see my fingers on the other side of the glass.  The head was fairly thin, but a good, creamy tan color that looks great as it narrowly overflows my glass.  When held up to the light, this beer changes to more of a deep, blood orange color, and you can actually see some bubbles ascending the glass.

Toast, toffee, and caramel —  those are the first things I smell when I take a whiff of this ESB.  It smells sweet, somewhat fruity, and actually smells like hints of chocolate and orange.  The chocolate surprises me a bit, but it definitely smells like hints of cocoa are deeply seeded in this beer.  It’s as if I’m smelling one of those chocolate oranges that break into slices and everyone pretended to love, but no one really liked.  I’m sure I’ll like this beer much, much more than those fake oranges, but it brings back that childhood memory nonetheless.  To balance out all of this sweetness is a hint of citrus hops.  It’s not strong, but seems to keep everything else in check.

Goose Island’s ESB is a bit on the thin side.  Slightly watery and medium-low carbonation doesn’t make this seem like a big beer.  At 6.4% ABV this has the potential to be a boozy beer, but it’s smooth and mellow.  The bitterness and carbonation tingle your mouth long after this beer is swallowed, and it invites me to keep drinking.

As expected, the first tastes are sweet.  There is some heavy toffee flavor, followed by slight fruitiness and chocolate, followed by breadiness and caramel, when all that is done the cleansing bitterness of the hops sticks to your tongue.  This beer literally has it’s own pallet cleanser built in.  Every sip starts this ride over again going sweet to bitter, sweet to bitter.  It’s fun and complex, leaving me to discover more and more flavors as the beer warms and opens up.  As I said before, this isn’t a beer that tastes like alcohol, but the more I drink the more I feel the warmth from the alcohol.  It’s very welcome on a cold day like today.

Like always, Goose Island delivered on everything that I want in a beer.  I’m not an expert on ESB’s, but the idea of a beer in perfect balance is exactly what I look for.  It has plenty of power to warm you up, but isn’t too sweet or bitter to keep you from drinking multiple in one sitting.  I loved the complexity of the malt flavors, and aromas.  I have the feeling that I could just dig into this beer, trying to find every nuance of the flavor, but I’d rather just enjoy it as is.

I’d give this a 95, a great, solid A.  The style might not be everyone’s favorite, for example my dad thought it had too much of a “burnt” flavor, but I could easily see myself drinking these every chance I get.  It went well with the stuffing and sweet potatoes at thanksgiving, and pairs well with other fairly strong flavors.  My advice is to get it while you can, or you won’t get it at all!