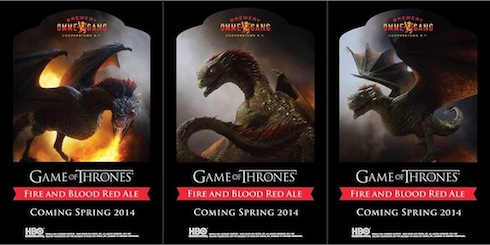 Game of Thrones: Fire and Blood – a BRC and BeerGaggle Review 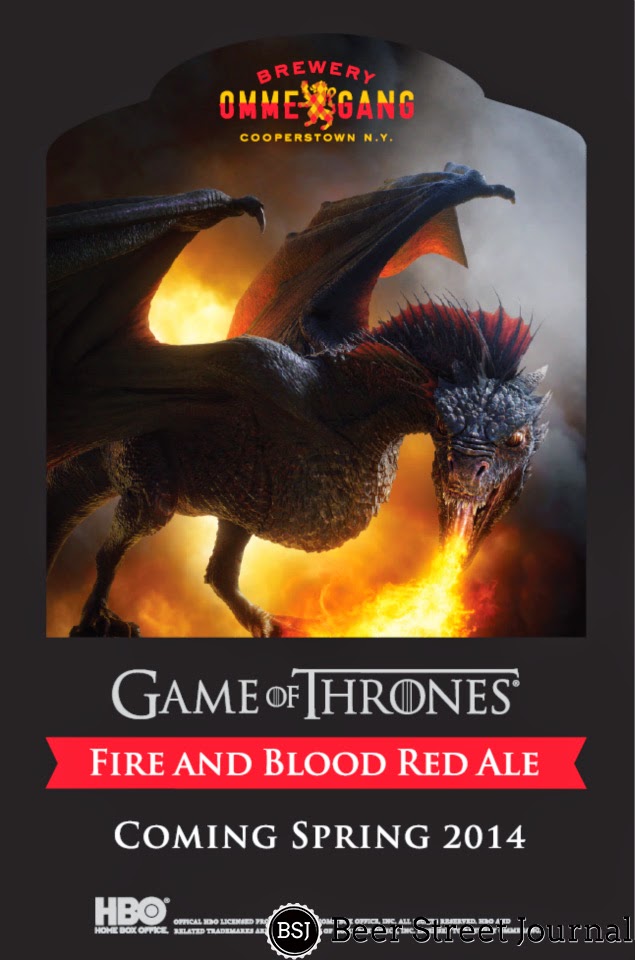 Review by: Our very own Ron Degregorio, and  BeerGaggle’s Matt “The Engenear” and Justin “The Brewer”

We collaborated with BeerGaggle in the past to review Dale’s Pale Ale, and decided to give it another go with the epic release of Fire and Blood.  Both teams reviewed the brew, and here’s what they had to say.

Ron – Ya know, there are few things in this world I love more than a good TV series. What is more fun than anticipating a fresh new episode week to week, snuggling up on the ole couch with a beer, and tuning in to your favorite show? Shows like Dexter, Homeland, Breaking Bad and others push us to the edges of our couches and make us stress to unreasonable levels, and it is all too easy to become a superfan; posting on discussion forums, buying the t-shirts, endlessly and annoyingly quoting the script (You’re Goddam Right). Today, with our buds over at BeerGaggle, we are reviewing a special beer in the Game of Thrones lineup from Ommegang Brewery.

Though I am not an avid viewer of GoT, I think it is absolutely badass that a brewery created a partnership with the show and created a beer to celebrate it. I can just picture this trend for other shows I love (Dexter’s Blood Red Ale, Walt’s Sky Blue Sour, etc).

I sat down with my big bottle of Fire and Blood, my tasting-tongue, sharp as a sword, and prepared to slay this dragon of a beer. Here is what Ommegang has to say about Fire and Blood:

“Named after the motto of House Targaryen, Fire and Blood is inspired by Daenerys Targaryen and her three dragons, Drogon, Rhaegal and Viserion. To celebrate the rebirth of dragons, three different labels were created by the Game of Thrones visual effects specialists, each depicting one of Daenerys’ feared dragons. Randomly distributed amongst the cases, each case will contain all three bottles.”

BeerGaggle- Forthcoming is a dichotomous clas of houses: one fire and the other blood.  Born from the ashes, or in battle? We Pluck the cork from its resting place and release the fury behind Ommegang’s Fire and Blood Red Ale to find out.

Ron- Fire and Blood pours a very dark copper reddish hue; dare I say deep-cut blood red? Topping this beer is an extremely fluffy white head, so large only King Arthur himself could cut through it. The head is inundated with very tiny/compacted bubbles of c02. Fire and Blood is fairly hazy, but you can see a very nice stream of c02 flowing to the top. Very pretty beer. Worthy of a Knight’s pre-joust beverage.

BeerGaggle- Amber/Brown with a fluffy, non-uniform, off-white head.  Minimal to no lacing.

Ron- Well, Fire and Blood simply smells fantastic. Those ancho chiles really come through on the nose and give you a peppery aroma that is warm and inviting. As you make your way past the peppers, very light alcohol notes come through. There are some well defined bready notes and surprisingly, to me at least, a slight belgian yeasty aroma comes through such as banana and cloves.

BeerGaggle- Heavy clove esters on the first nose followed by a sour/lactic-like aroma common to some sour ales.  It finishes with a very pleasant earthiness.

Ron- The first thing I detect is the ancho chiles. They are not hot in any way, but they add a funky spice to the taste. Much like the nose anticipated, the taste is very bready and malt forward in my glass. There is a distinct dry aftertaste and a long lasting bitterness.

There are some dark fruit characteristics I am picking up, probably from the chiles, specifically raisins.  Though there is a lot of flavor, at the same time it seems very subdued and mild, and just a little thin for me. I wish there was just a little more body. The lingering aftertaste is nice, however, and has the essence of a belgian ale, with a belgian yeast-type flavor. As the beer warms up, it tastes a lot more like a belgian style ale than a red ale, and the chile flavor almost fades away to nothing.

BeerGaggle- Your taste buds are hit with a sharp/tart character which immediately rounds out into a nice, caramel-like malt character.  Very phenolic yeast profile, indicative of an Irish ale yeast.  You don’t notice any detectable heat until you take a nice, big, deep breath in.  Then, your tongue quickly starts to tingle from the ancho chiles.  Finishes with a subtle chocolate flavor.

Ron- I would give Fire and Blood a 80%, or a C+/B-. While I enjoyed the beer as it warmed up, nothing jumped out at me in this beer. It was a very “meh” type flavor for me. I enjoyed the drinking experience, but I would not personally seek this brew out over other red ales. As one of my favorite styles, this did not do much for me as a red ale. If it was a belgian-style, I would probably be a little more on-board with it. It is not bad by any means, just nothing special.

BeerGaggle- Fire and Blood is one of the most balanced chile beers I’ve had.  You get the heat, you get the malt, and you get everything in balance.

I’d like to give another big shout out to the guys over at BeerGaggle.  If you’ve never been to their site, check it out, especially their spin on March Madness:  a tournament of beers with nothing but the best IPA’s in the world.