Founders Brewing Co. announced today that they will launch Green Zebra, a gose-style ale brewed with watermelon and sea salt. Debuting this August, Green Zebra will be the fifth release Founders has brewed for ArtPrize, an open international art competition which takes place each fall in the brewery’s hometown of Grand Rapids, Michigan. Previous releases in the lineup include Pale Joe, Spectra Trifecta, Mosaic Promise and Inspired Artist Black IPA. Green Zebra is the first gose in the series, and also the first ArtPrize release to debut in cans. Proceeds from the sale of Green Zebra go towards the sponsorship of ArtPrize.

Check out our review of Founders FrootwoodCherry Ale in Maple-Bourbon Barrels!

“ArtPrize is one of the most well-attended public art events in the world, and we are proud to continue our support,” said Co-Founder and President, Dave Engbers. “We love playing with expectations when it comes to brewing our ArtPrize beers and Green Zebra is the perfect example of that. The gose style is very unique and pretty unknown, even amongst craft beer drinkers, and we wanted to bring our version of it to a larger audience. For the first time ever, our ArtPrize beer will be available across our entire distribution network so even more of our fans can get to know this style we’ve fallen in love with.”

Watermelon is the highlight of this lightly-hopped treat and gives it a hint of satisfying juiciness. The soft mouthfeel and dry finish comes courtesy of the addition of sea salt, a traditional gose ingredient. Green Zebra comes in at 4.6% ABV and 10 IBUs. 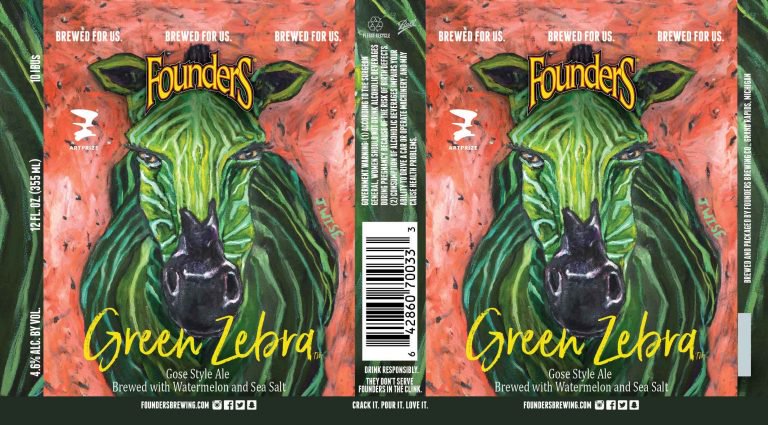 In keeping with the artful tradition established with Spectra Trifecta and Pale Joe, the Green Zebra label is an original work of art designed by a member of the Founders team. Jacob Wiseheart from the Founders taproom created the label artwork, a stand-out for its striking and intense use of color and dimension, perfectly suited to the lively, bright nature of the beer.

ArtPrize is an open, independently organized international art competition which takes place for 19 days each fall in Grand Rapids, Michigan.  More than five hundred thousand dollars in prizes are awarded each year, which include a $200,000 prize awarded entirely by public vote and another $200,000 prize awarded by a jury of art experts. For more information, visit artprize.org.