Founders’ CBS — Is It Worth the Hype? 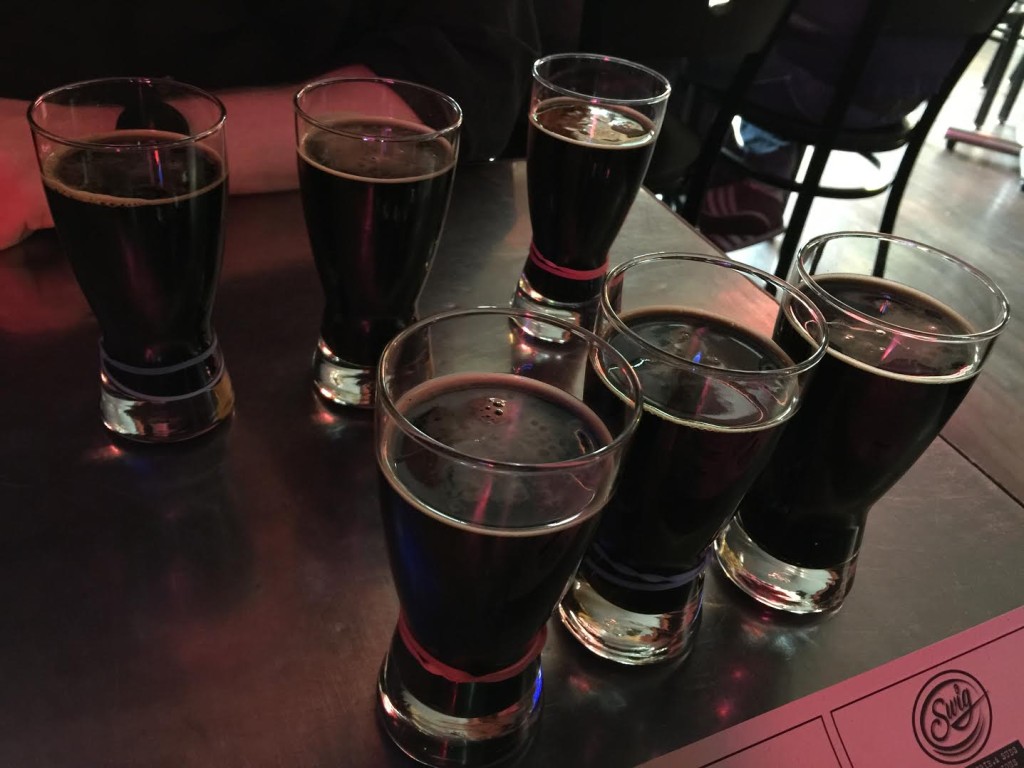 It’s not every day you get to try a beer that is so highly sought after that people would pay upwards of $150 a bottle for; hell, an empty bottle from this beer went for over $50 on eBay recently!  So when we got the chance to try the latest iteration of Founders’ Canadian Breakfast Stout (CBS), we knew we had to do everything in our power to taste even the smallest amount of this dark delicacy.  Luckily for us, this cost nothing more than $20 and a little planning ahead to get tickets to the Founders Backstage Takeover at one of our favorite local bars; Swig in Perrysburg, OH.  With that $20 ticket, we were given 8 oz pours of Founders Breakfast Stout, KBS, and CBS to get all of the breakfasty goodness side-by-side.

Why is there so much hype around CBS?  To start, it hasn’t been brewed in years.  The last time this was distributed was in 2011, and I have seen many traders online holding on to these bottles waiting for the right trade to make.  Until this event, the only bottle we had ever seen was in a cellar of a guy we consider a beer god.  He was opening up some 100-rated, rare beers for us one night and he showed us the bottle saying that he was saving it for a special event. 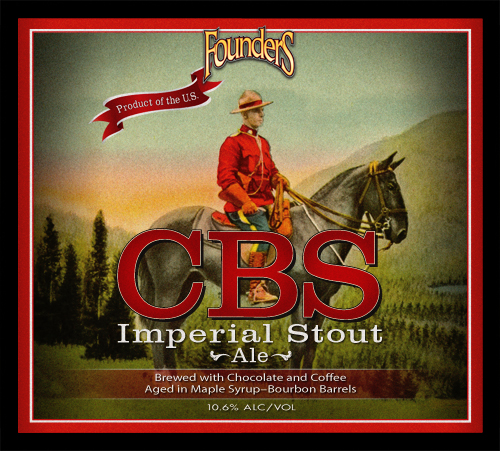 Another reason this is such a special beer is the barrel it’s aged in.  Yes, barrel aging any beer is going to give it significantly higher trade value, and when you pair that with the fact that enough barrels for CBS are only available two or three times a decade, you get a beer that traders, geeks, and snobs alike salivate over.  These barrels are used to age bourbon, and then used to age maple syrup, and then used to age CBS.  Why are they so hard to get?  As said by the Founders rep we talked to, “How often do you buy bourbon barrel maple syrup?” 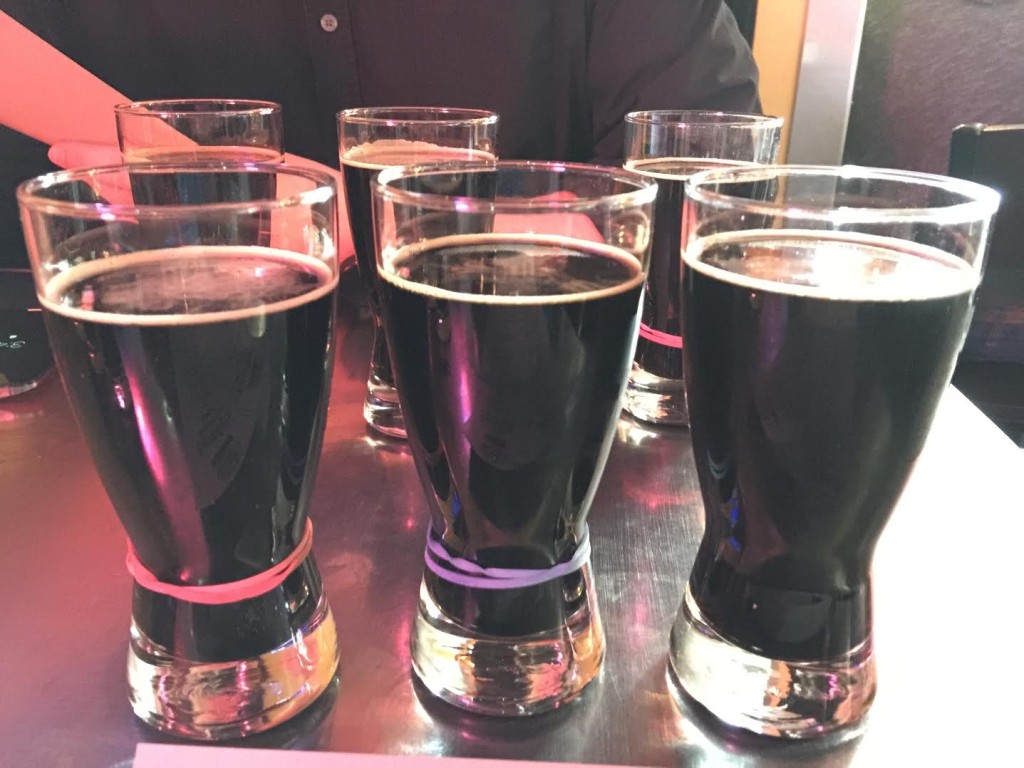 Going from the blue rubber band (blue for Breakfast) to the red rubber band (red for… Canada?) was the way we decided to tackle this heavyweight lineup.  Founders Breakfast Stout is simply a great beer.  Going from the more burnt, coffee-tasting, soy-sauce-like Breakfast Stout to the sweet and vanilla/bourbon/chocolate/oak/unicorn-horn packed KBS is just an overwhelming experience.  You can see why people trade world-class beer for KBS and why it is such a big deal (for a refresher on our thoughts of KBS, check out our video below; it’s an oldie, but a goodie).  This jump is what Spinal Tap imagined when they made amps that “go to 11”, and it’s what we hoped we’d see when we compared KBS to CBS.

Have you ever been to a pet store and seen the puppies behind the glass cage just staring at you to take them home?  This is the same feeling you get when a glass of CBS is staring at you, pleading, begging, imploring to be tasted.  So we did it, we took the final jump, we made the ascent to the summit of Beer Geek Mountain, and what did we think?  “That’s pretty good!”  Neither of us spontaneously combusted, broke into tears, or even had much of a reaction at all.  It’s not that CBS wasn’t great, it was absolutely better than KBS and deserves it’s 100 rating, but it also didn’t give us the feeling that we landed a whale.  For weeks leading up to this event, we were jittery knowing that in a few short days we’d see what all the hype was about, we’d get to try the beer that gets traded for BCBS Proprietors, usually at more than a 1:1 cost.

While KBS is like if Breakfast Stout took steroids, we both felt that CBS was as if KBS hit the gym once or twice a week.  Compared to KBS, it was smoother, richer, sweeter (definitely more chocolate), and had just a twist of maple.  It was noticeably better, and maybe we would have been blown away having the beer on it’s own, or just having it next to regular Breakfast Stout with only memories of KBS past to compare it to.  But we had all three and it was an eye opening experience for us to see that sometimes even the best of us get hooked by the hype. 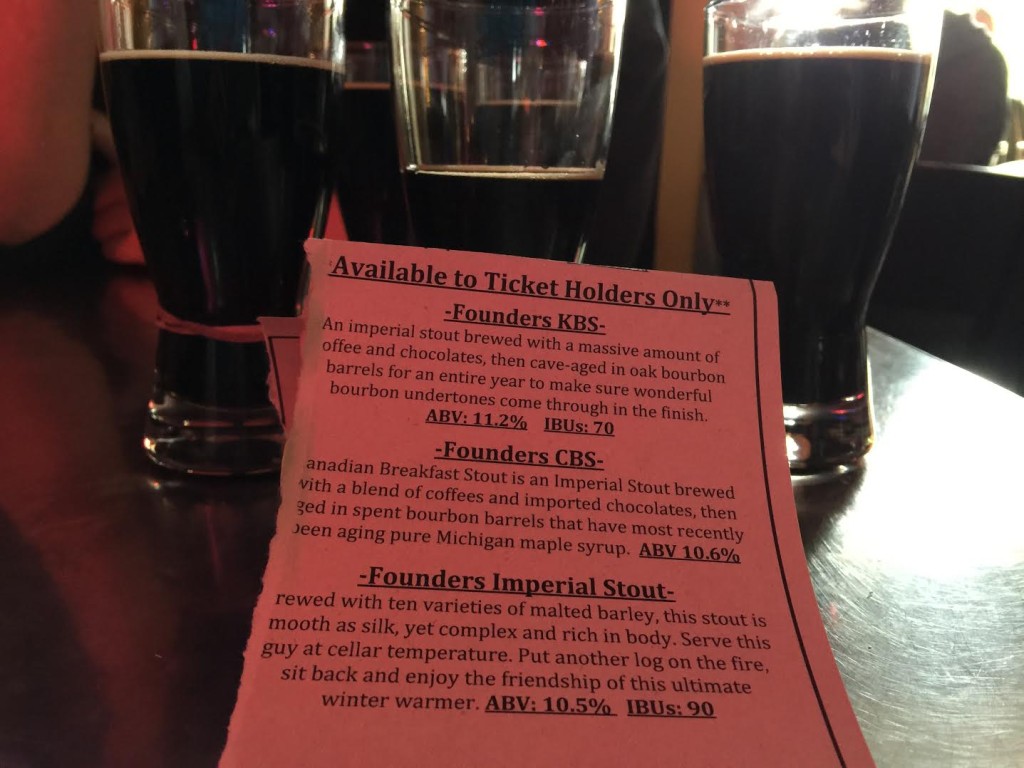 I’ll say it again,  this is one of the better beers I’ve ever had; it was stupidly delicious, but would I be willing to trade away my entire cellar for it?  No, and neither should you.  Especially if you’re getting a 2011 bottle, because by now there will be almost zero trace of the maple, according to reports.  If you can get a chance to get to one of these Backstage Tap Takeovers, do so, it’s a great deal and a chance to try some incredible beers, I’m just saying hold on to your BVDL, Prop, or whatever myriad of whales you’re saving up to taste some CBS.  Sometimes, the hype machine is just that — hype.