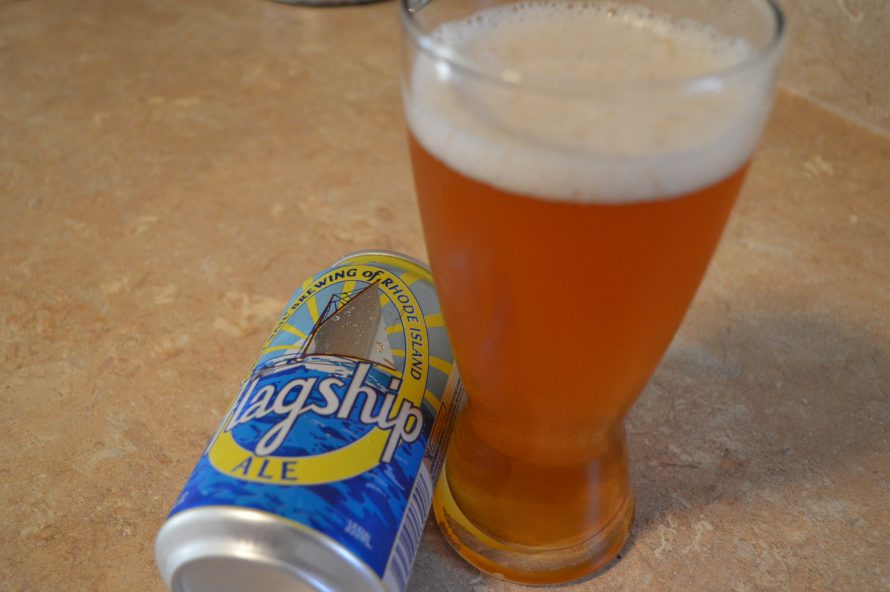 Flagship.  It’s a term thrown around by breweries to describe their money-making beer.  The beer that put them on the map, the one that is available year round, and the one that everyone knows and loves.  Well, Grey Sail Brewing of Rhode Island took that idea to a whole new level by naming their flagship, Flagship!  Flagship is a cream ale, a style that doesn’t get a lot of love now-days, but is great for year-round drinking, but perfect for those warm days of summer.

What makes cream ales so special is how they are brewed.  A lot of times, they are more of a hybrid beer than your typical ale or lager.  Light in color and, almost, absent in hops, these beers get their crisp refreshing flavor from being fermented fairly warm, like an ale, but then finished cold, like a lager.  Grey Sails uses noble hops in their bittering process, and claims this to be “the perfect session ale”.  With a claim like that, it’s almost a challenge for me NOT to drink it!

I don’t know that this quite counts as part of the appearance, but this thing basically exploded out of the can.  I’m going to take a wild guess and say that this beer is can conditioned, because A.) by the time I popped the top there was beer on the counter, and B.) the tail end of the pour was like a liquid yeast sludge.  I make note of that because I think that had I known it was can-conditioned, I wouldn’t have poured the yeast sediment into the beer, and it would be a lot clearer.  Right now, it’s a honey color, deep golden straw, almost like cinnamon spiked apple juice.  Flagship is very hazy and poured with a vigorous and brilliant white head.  It looks much darker than I assumed a sessionable cream ale would be.

Flagship has a very nice aroma.  Graham cracker, slightly biscuity, some light caramel notes as well; you can tell this thing is going to be malt-forward.  I get a very faint hint of creamed corn, maybe some adjuncts were used in brewing Flagship, but it’s not at all off-putting the way the corn-like aroma on a light lager is.  I get a complete absence of hops, if anything they just add a slight earthy/spicy tinge to the beer, but really I don’t get much.

One of two things happened, either a lot of the carbonation was lost onto my countertop, or this beer is not made to be extremely bubbly.  It goes down like water, with just a light brushing of carbonation on the swallow.  Thin body, but still has a slightly sweet finish leaving that sticky feeling in the back of my throat.  Not to the point where I would need water, but it’s there.

That is really, really nice.  Flagship spins a gossamer web.  It’s almost lighter than air in every sense, yet has a refreshing graham cracker taste to it.  It’s almost as if all of the flavor comes in the aftertaste of the beer.  It’s incredibly clean, not bitter at all, and has a honey-like sweetness that puts a smile on my face.  I will say this, it’s a very one-dimensional beer.  The aroma and the taste are almost exactly the same, but it’s a flavor I enjoy.

To be honest, I’m torn.  Had no one prefaced me saying that this was supposed to be a session beer, I’d say it’s flat (in terms of flavor, not CO2) and one dimensional.  I’d say that there’s not a whole lot going on, it’s boring, but it has a good taste.  Since I know it’s a session beer, I think they kind of nailed exactly what they were trying to do with Flagship — create a light, great tasting, refreshing beer that you can have loads of.  All that being said, I’m going with an 81 here.  I appreciate how delicate this beer is, but I also know that it’s possible to have a session ale with more complexity.  I don’t even necessarily want stronger flavors, I just want different flavors, something to make me go back in and explore the beer.  Instead, I just enjoy it for what it is.  I don’t know that I’d call this the perfect session ale, but I will say this; I feel like I should be sitting on my tractor drinking this beer, I just wouldn’t go show it off to my friends.