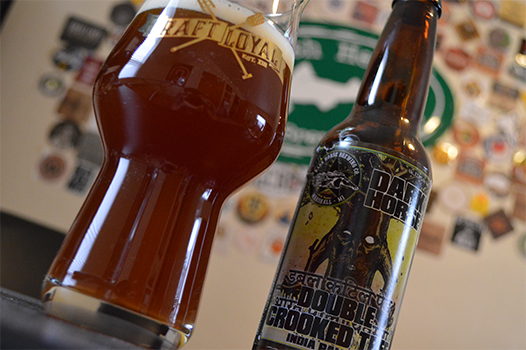 If you aren’t from the Midwest and know about Dark Horse, it’s most likely because of their abruptly-canceled show Dark Horse Nation.  In my opinion, History was trying to make Dark Horse the Duck Dynasty of the beer world.  If you know of them outside of their TV show, it’s because they make some incredible beers.  People trade some highly regarded beers for Barrel Aged Plead the Fifth, and their IPA’s usually are world class.  In fact, our very first (and completely terrible) video review was of their Tres Blueberry Stout.

Double Crooked Tree is a unique beer in that it is literally the doubling of a beer they already have, Crooked Tree.  They double everything except for the water to create a seasonal beer that people flock to.  Here’s what the Dark Horse Website has to say:

We actually took the Crooked Tree recipe and doubled all of the ingredients except the water, just the way a DOUBLE should be made. Big hops balanced with tons of malt give this beer a huge body. Enjoy right away or let it mellow and smooth with some age.

This is my first Double Crooked Tree, so when it poured out as dark as it did, I was taken aback!  This beer looks more like an Irish Red than a typical IPA.  It is a muddy mahogany color; cloudy with hues or both red and brown.  The head is bright white creating a fun and distinctive contrast between the body and the foam.  Speaking of the head, if there was no head on this I would have no idea it was carbonated.  Double Crooked Tree is so murky that I can’t even see bubbles rising through the glass. 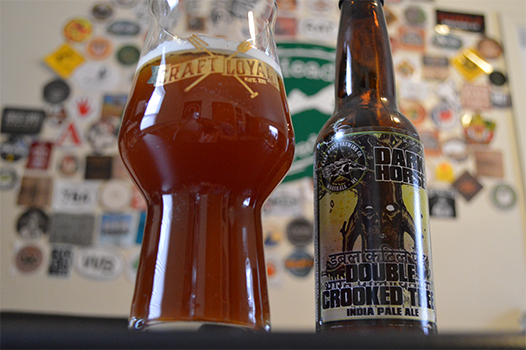 The aroma of Double Crooked Tree reminds me that this is a BIG IPA.  I get tons of caramel and pine, but in the background there is a booziness that cannot be hidden. It is a 12% beer, and I’m going to guess that this is a soft 12% considering they had to keep it that low to sell it in Ohio.

I get slight notes of candied citrus, orange peel or tangerine.  I don’t often get to say that beers have notes of marmalade, but this is one of those brews.  It is sweet, sticky, and smells like beer candy.

Is there an IPA that I’ve ever said “Dat Mouthfeel Doe” to?  If not, this is the first.  It is crazy smooth and velvety.  Double Crooked Tree is thick and chewy, almost the same way I’d imagine a stout or a wee heavy Scotch ale.  Along with the big body comes big fusel notes and big sweetness.  This beer is so sticky sweet that I almost want a water glass to wash it down.

After an initial taste, I’m not too sure how I feel about Double Crooked Tree.  It starts of super malty, yet this isn’t an old bottle.  The second flavor is a big boozy punch, and the third swing is a lingering bitterness that amplifies over time.  At first, I didn’t even get hop presence at all, but as it sits, the bitterness builds and builds. I do get some orange, and the marmalade descriptor is a nice fit in the taste as well, but this beer is not a hop showcase by any means.

This is not an IPA like I am used to.  It is maltier than I’d like, and the hop flavor doesn’t come out as much as the hop bitterness does.  In reality, this is the opposite of how I want an IPA.  To me, IPA’s should showcase hops in some way, shape, or form.  I’m all for a well balanced DIPA, but this is so much malt that it throws the balance in the wrong way.  It makes me feel like I’m drinking an IPA that has passed it’s “drink by” date, yet the booze on this tells me it hasn’t been aged long enough.  For that reason, I’m giving Double Crooked Tree an 80.  That being said, I could see this being a lot like 120 min IPA in that fresh it isn’t as good (to me) as it is with a little age on it.  I’m going to age a couple of these and see how they turn, but in its fresh form, I am not in love with Double Crooked Tree.

What do you guys think?  Have you had DCT and loved it? Am I way off? Let me know in the comments below.