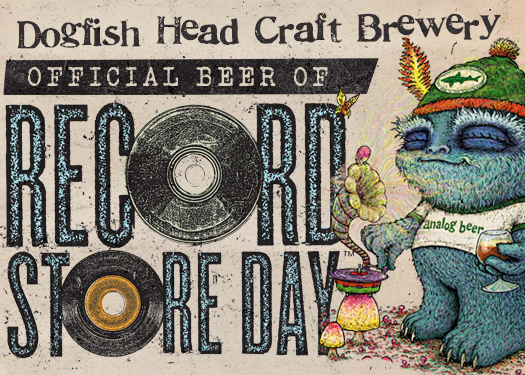 April 18th, 2015 marks the annual celebration of music known as Record Store Day! Originating in 2007, Record Store Day aims to celebrate the more than 1,400 independent record stores throughout the United States. How does this have anything to do with craft beer? Beginning this year, Dogfish Head, perhaps the most free-spirited brewery in the United States, will be the official craft brewery of Record Store Day!  It should be no surprise to anyone that if there was to be any brewery named as the official brewery of Record Store Day, it would be Dogfish Head. Dogfish Head’s venture into the music scene is long and storied, and is craftily demonstrated within their Music-Series beers such as Bitches Brew (Miles Davis),  Faithful Ale (Pearl Jam), and Positive Contact (Deltron 3030). Their previous more official associations within the music community have been noted here before as well with their involvement in their Analog-a-Go-Go. For Dogfish Head, great music and beer go hand-in-hand.

“Our brewery has been obsessed with music since long before we opened our doors,” Calagione says. “And these days, anytime I’m in the brewhouse, there’s something playing.

For a brewery that makes “Analog Beer for the Digital Age”, it seems like a natural fit for Dogfish Head to be the Official Beer of Record Store Day, a celebration of the unique culture of record stores and the special role they play in their communities.

With the help of friend and concert poster artist Marq Spusta, Dogfish Head has created the Official Poster of Record Store Day. The limited-edition poster will be available for free at select stores and bars that sell Dogfish, as well as on Record Store Day at participating music retailers.

You can see where YOU can celebrate Record Store Day in your area right here!

On March 10, Dogfish will unveil a limited-edition compilation. “Music to Drink Beer To,” available on both vinyl and CD, was put together by longtime friends Sam Calagione and Adam Block of Sony Music’s Legacy Recordings and will feature a legendary lineup of off-centered musicians. Sam, who’s in the beer business and a raging music geek, and Adam, who’s in the music business and a raging beer geek, sat down over a few beers and a stash of well-worn vinyl and picked some of their favorite tracks. The play list will debut March 10, and the compilation will be released on Record Store Day at retailers across the country. 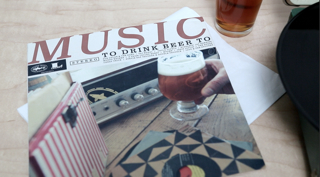 Marq Spusta’s art also will appear on a mini traveling turntable from Crosley. Featuring built-in stereo speakers and 3 speeds, the Dogfish Crosley will be given away as prizes at Dogfish Head events and available for purchase at dogfish.com. 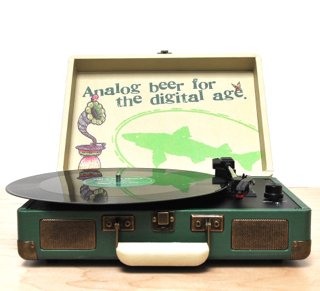 Following the press conference, Dogfish Head will be hosting a Happy Hour from 3 to 5 p.m. at Barcade featuring vintage Music Series beers. Calagione will be spinning vinyl on the new Dogfish Crosley, set to be raffled off along with some vinyl.