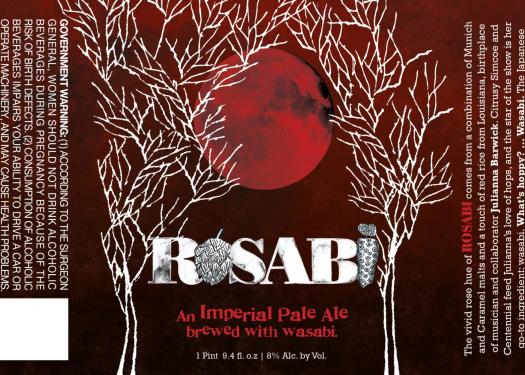 One of the coolest things about Dogfish Head is there musical collaboration series. The mission of this program is to create new beers influenced by musical artists and their music. There have been some terrific concoctions that have arisen from the program such as Bitches Brew. a Miles Davis collab, as well as Positive Contact, a collaboration with Dan the Automator of Deltron 3030; though these are just two of many awesome collaborations.

We here at Brew Review Crew want to know what your favorite Musical Collaboration from Dogfish is. Let us know in the comments below!

The latest iteration of the Musical Collaboration series is Rosabi, an Imperial Pale Ale that is created in partnership with musician Julliana Barwick.

As a bonus, the first 1,000 cases of six 750ml bottles of Rosabi will be packaged with a 10-inch record of original songs that Julianna composed using sounds from Dogfish Head’s expanded brewery!

Here is the press release from Dogfish:

Julianna, who builds ecstatic choirs by looping and layering her voice, was enamored of the brewery. Remarking on the symphony of sounds that surrounded them – the hum of a grain belt, the firing of a pneumatic valve, the drone of the whirlpool – Sam challenged Julianna to compose four original songs tracing the creation of a beer, through brewing, fermentation, filtration and bottling.

“I just love Julianna’s sonic palette,” says Sam. “Her layered style reminds me of the art of brewing. Her songs are beautiful but completely unconventional, just as our beer recipes are completely nontraditional. But in the end, they are both distinct and find an adventurous community of enthusiasts.”

The four-song mini-album will be available in a limited edition of 1,000, sold only in sealed cases of six 750ml bottles of the 8% ABV Rosabi. The vivid rose hue of Rosabi comes from a combination of Munich and Caramel malts and a touch of red rice from Julianna’s home state of Louisiana. Citrusy Simcoe and Centennial feed Julianna’s love of hops, and the star of the showis her go-to ingredient: wasabi. What’s hoppy? … Wasabi. The Japanese root adds bittering and herbal notes similar to hops, with its subtle heat creeping in after the kick of carbonation.

On her visit to coastal Delaware, Julianna rolled up her sleeves to brew a test batch of Rosabi, even grating the wasabi herself.“I’m a huge beer fan,” says Julianna, “and I had as much fun incorporating the sounds of the beer-making process into the songs as I did learning about it all. It was an honor to have the opportunity to collaborate with Sam and everyone at Dogfish on this project!”

“Thinking back to the earliest days of Dogfish, there was a great possibility that it could have remained very small,” says Sam. “But because so many talented people have chosen to join me on this journey, we’ve grown so much, and each one of our co-workers adds a layer that makes us stand out from anything else in the brewing world. To have Julianna on board – and her complementary ability to layer and grow and explore – has been a perfect fit.”

Julianna adds, “It was an honor to christen the new brewery, collaborate on a unique beer with someone like Sam, and create new music for an incredible company like Dogfish. It’s clear that the people of Dogfish are happy and proud of what they do and they should be. I can’t wait for people to try Rosabi!””

You can read more about this Rosabi HERE