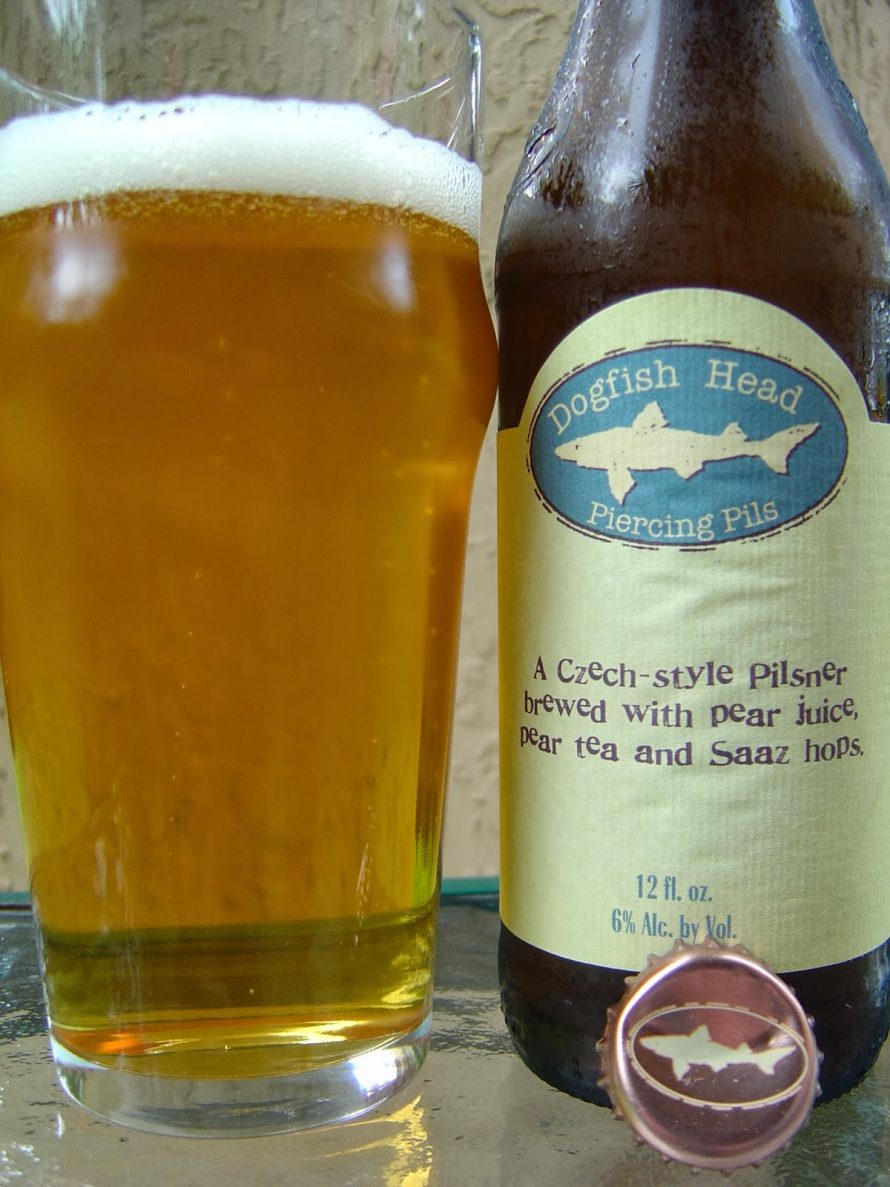 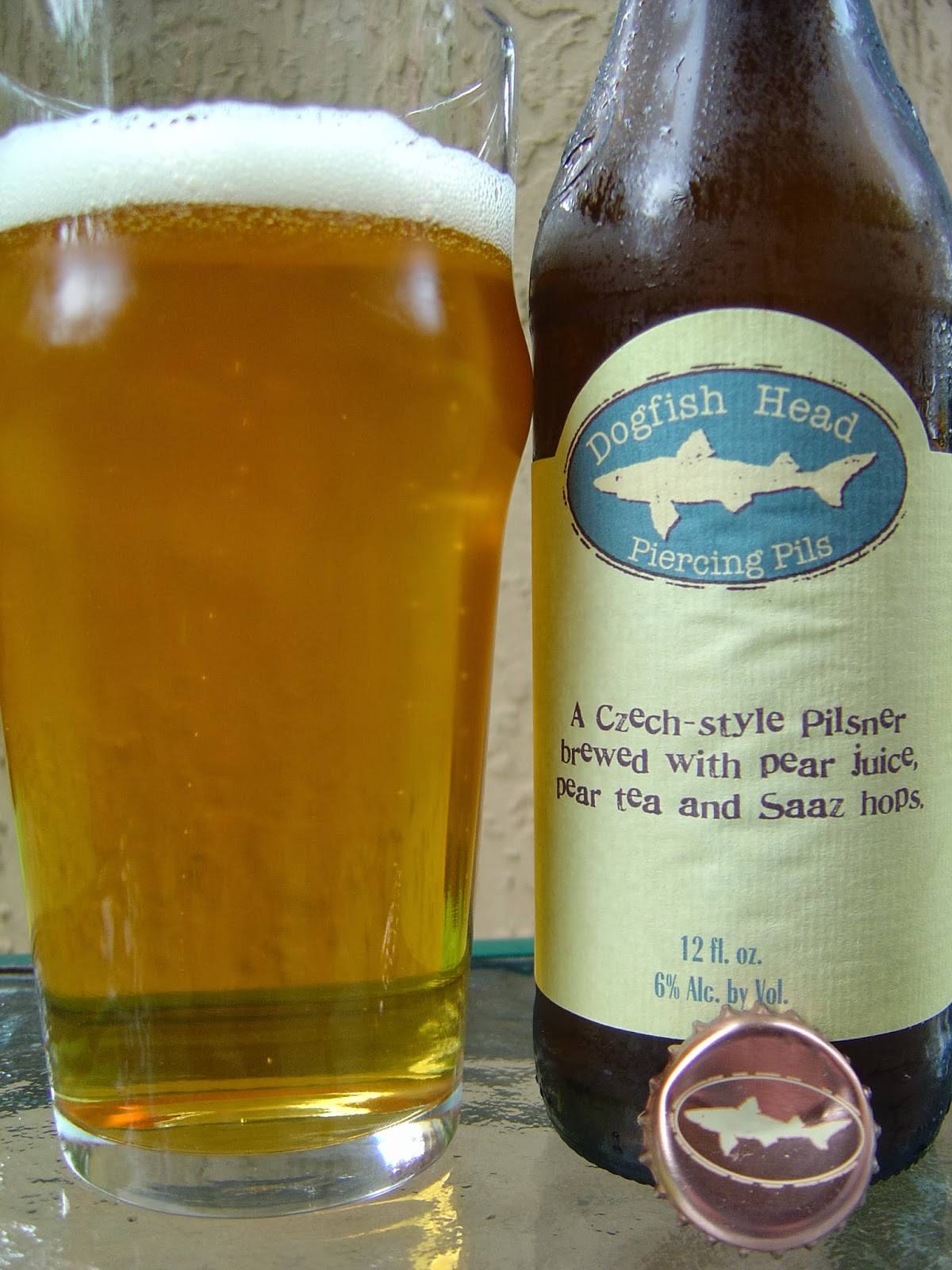 Ron came over the other day for a craft brewed meal.  Thanks to The Craft Beer Cookbook by: Jaquelyn Dodd, we dined on pulled pork tacos made with Bells Java Stout, and pale ale tortillas made with Stone Pale Ale.  After dinner (which was delicious) we started talking craft beer, and we watched videos of different beer reviews when we stumbled upon this video of Dogfish Head’s Sam Calagione talking about one of their newer beers: Piercing Pils.  Neither of us are crazy about Pilsners, but this video caught my eye not only because I love what Calagione does at Dogfish Head, but because I happened to pick up a bottle of Piercing Pils just hours before, so we cracked one open to try it out.

Like I said, neither of us are huge Pilsner drinkers.  Mostly because it reminds us of the bad beers that dominate the world, but also because there just isn’t usually a great amount of flavor to them.  They’re clean, crisp, maybe slightly hoppy, but don’t scream “unique” or “fun” to drink.  If there’s any brewery that could make a Pilsner sound interesting, it is Dogfish Head.

Dogfish Head has this to say about the beer itself:

“A Perry-Pils hybrid, Piercing Pils is a Czech Style Pilsner brewed with a White Pear Tea and Pear juice.  Both the juice and the tea were added in the kettle during the whirlpool (after the boil) for maximum flavor and aroma contribution.  The Pear fruit complexity pierces right through the spicy Czech Saaz hops beautifully, adding a gentle acidity to this pale lager that makes for a crisp refreshing sipper.  Amarillo hops add nuanced citrus notes that meld perfectly with the fruit.” — http://www.dogfish.com/brews-spirits/the-brews/seasonal-brews/piercing-pils/index.htm

Here’s what we have to say.

I’ll say one thing about Pilsners, they always look like the best beers on earth.  This is no exception.  Piercing Pils pours a deep golden straw color; like a hay field after a downpour.  The head is thick, frothy, and isn’t going anywhere.  Unlike a lot of beers this light, the head on Piercing Pils seems viscous and just looks great.  The bubbles rocketing from the bottom of the glass tell me this is going to be a fizzy, lively brew.

For a beer brewed with pears, and pear tea, this doesn’t smell much like pears at all.  I get the typical clean, graham crackery, light-malt aroma that I’d get from any Pils.  There is a slight hint of esthers/green apple which might be from the pear, but even though I know it is brewed with pears, I still think it smells more like sour apples.  It’s a bit sulfury, but to me is more typical pils than the pear paradice I was looking for.

Piercing Pils’s mouthfeel shows the difference between a brewery like Dogfish Head, and a smaller start-up craft brewery.  It is light, yet creamy; well carbonated, yet refreshing.  It is how every lighter beer should feel as you drink it.  Mouthfeel seems like a fairly trivial category, but in beers like this, it shows how a good brewer can enhance the beer experience with the right combination of malts, adjuncts, and carbonation level/method.

At first I thought everything was typical pils, yet again.  But the more I drank the more I found.  Yes it is malt-forward, very light, clean, and crisp, but it also has some great spicy notes as well.  These probably come from the peppery Saaz hops used, or might be from the fresh basil, but it is definitely there.  It has back-notes of pear, and the aftertaste is kind of green tea-esque.  Completely interesting in a good way.

Ron’s comment on the taste is that is tastes just like every beer you’d drink in college.  He think it is like a day old, warm, Big Two beer.  He obviously wasn’t as big of a fan as I was, but he also admits to thinking almost all Pilsners taste the same.

It’s a beer like this that shows us just how reviews can differ from drinker to drinker.  I would drink Piercing Pils again if I saw it on tap.  I give it a 95, A.  It has some room to improve to be perfect, but I think it is just really well done and delicious.  I would drink it with a light, citrusy meal.  Ron would probably rate it more in the C range.  He drank it, but it just isn’t his thing.  There’s nothing wrong with that, to each their own, but if it’s up to me, you should search this beer out because it’s only around for a limited time and is a great example of taking the mundane and making it magnificent.