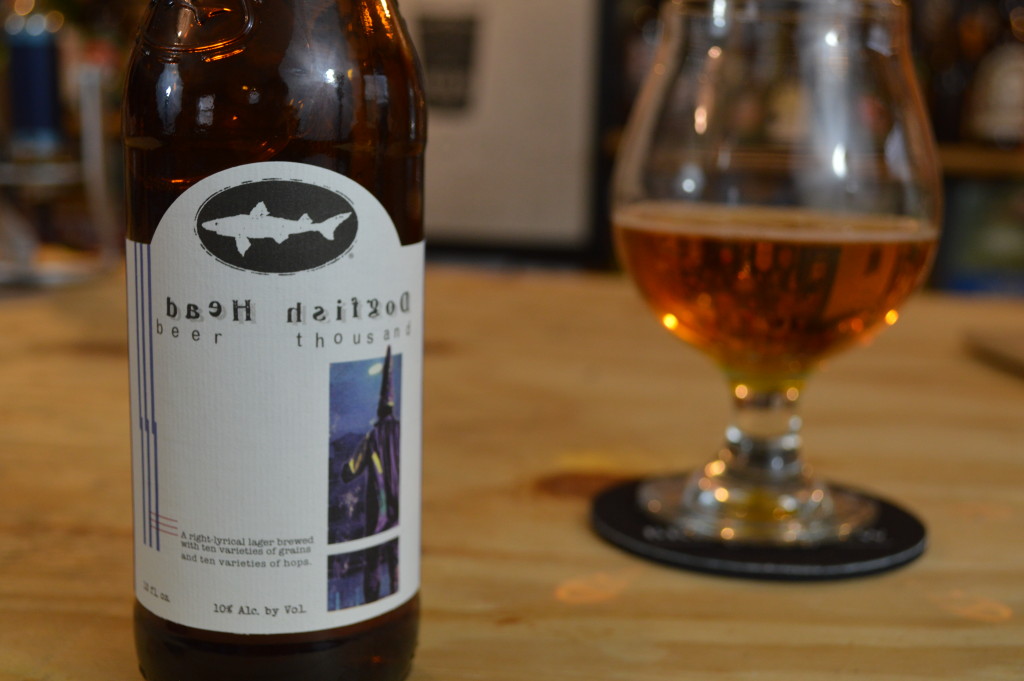 Quick editor’s note: we meant for this to be a video review, but due to a malfunction in our sound equipment, we have transferred our thoughts into writing.  Enjoy!

10 grains, 10 hops, 10% ABV — this is the recipe for Dogfish Head’s extreme brew called Beer Thousand.  Beer Thousand is an Imperial Lager, which is a style of beer that we’ve never had or even seen before.  The grains included in this beer are: 2-row pale malt, 6-row pale malt, Corn, Rice, Wheat, Dark Munich malt, Carapils malt, Light caramel malt, Dark caramel malt, and Flaked barley.  Each of these grains serve a different purpose in the brewing process, whether it’s for color, flavor, body, or mouthfeel.  Most recipes out there call for multiple grains like this, but as a homebrewer, I’ve never used more than 5 or 6 varieties at a time. 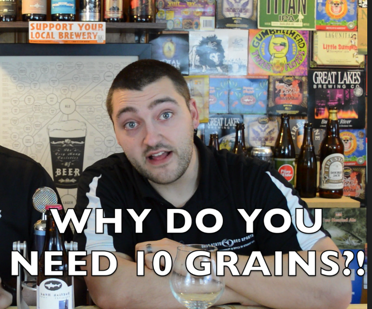 The ten hop varieties are:  Warrior, CTZ, Simcoe, Cluster, Galena, Galaxy, Centennial, Willamette, Cascade, and Vanguard (See more info here). It’s hard for us to imagine that with this many hops, and with some stronger hops like CTZ, Warrior, and Simcoe, that this isn’t going to boarder on an IPA, but the description is that this is like a light lager, only amped up to 10%.  The only way I could see the hops being minimized enough to have the balance of a light lager is if they use minuscule amounts of each hop.  That being said, maybe the grain bill being so large will help keep that lupulin in check.

Both of us kind of have reservations about this beer.  We’re both huge Dogfish fans, I have said time and time again that they are one of my favorite breweries, but this beer screams “schtick” more than it does “well thought out beer.”  It’s almost as if they came up with the name Beer Thousand, and tried to figure out how to make that name into a beer, “10 x 10 x 10 = 1000, let’s start there.”  I’m sure this isn’t the truth, but knowing DFH’s affinity for being different at all costs, it kind of makes me wonder if they created the recipe first and it just so happened to have 10 of each, or if this was the inspiration from the start.  Either way, we applaud Dogfish Head for being different.  Ron loves to point out that there are a trazillion IPA’s on the market, and a bajillion other light lagers, they might as well go out there and do some fun things with brewing, because not many breweries have the financial stability to think that way.  Enough chat, let’s get into this one-of-a-kind brew!

Beer Thousand looks more like Pliny the Elder than it does Bud Light.  It is golden amber, darker than most other lagers out there, and has a thin white head tracing the top of the glass.  At 10% it’s hard to get a lot of head on a beer, so this isn’t going to be big and frothy like most American Adjunct Lagers are.  You can see how having 10 grains makes a difference, too.  The beer is stunning, it has hues of color that you can’t get from rice, corn, and pale malt alone.  It is crystal clear, and just a picturesque example of what  a beer should look like. 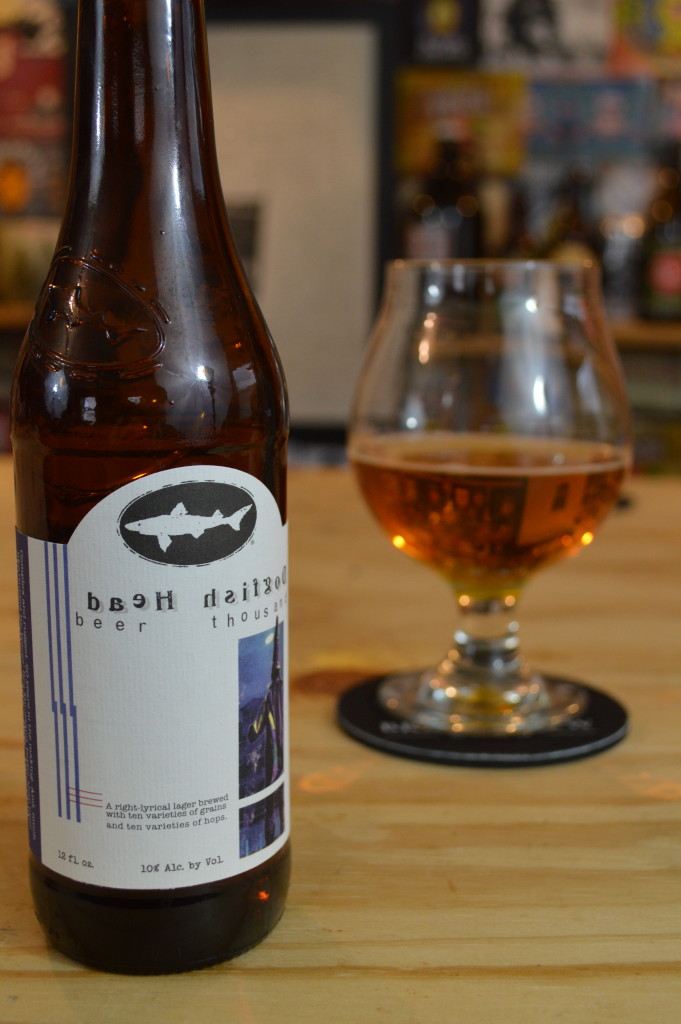 The first word that came to my head when I took a sniff was the same word a lot of people use to describe Dogfish Head — “Weird!”  Ron and I were both shocked to see that Beer Thousand smells more like a white wine than it does a corn-based lager.  It has graininess to it, too, but this fruity, white-wine aroma was first to hit our noses.  While I’m not much for wine, Ron compared this to a Riesling or a Chardonnay, something with light fruitiness and hints of apple with a light buttery note as well.  It also reminded us of the grainbill on some of the more malt-forward double IPA’s we’ve had.  There’s this great burnt-caramel sweetness that compliments the corn and the rice adjuncts really well.  Lastly, I can get the aroma of cereal grains, it reminds me a lot of the smell I get when homebrewing a beer.  Here’s where Dogfish Head gets me, I was a little bit reserved by the idea of Beer Thousand, but after smelling this beast, I’m dying to dive in!

First impressions of this beer, Ron and I were split.  I thought it was going to deliver a kick of flavor the same way that the Aroma was intriguing and pungent, but I was let down.  Ron thought it had plenty of flavor, he just didn’t know if he liked them.  The first wave of flavor in Beer Thousand was almost muddled.  Maybe there was too much going on to comprehend, but it was just hard to pin point what exactly we were tasting.  The back end was full of fruity apple notes, almost to the point of tasting like a cider.  It was more like a wine than a beer, and maybe that was DFH’s intention, but the flavor of the hops and some of the grains were expected to be so big and bold, but instead were subtle, muted, and almost disappointing. The hops were almost nowhere to be found, save a little bitterness on the back end.  The grains gave off some biscuit, sourdough, and crackery flavors, but it takes a lot of digging to find them.

As Ron put it, getting an American Lager up to 10% ABV is a feat of liquid engineering.  Lagers aren’t usually made to ferment to 10%, but obviously it can be done, and it creates a very unique and discussion-worthy beer.  It also creates a beer that has us torn when it comes to what rating to give it.  I, Cory, am going with an 83.  I don’t love it, I don’t hate it, but I want to give it a boost from the “C-Average” rating because of how cool it is.  I just wished it brought a little more flavor to the table.  Ron gives Beer Thousand an 80.  He mentioned that he feels a lot of Dogfish Head’s experimental beers aren’t bad, but they are usually just kind of “meh”.  When you say that a beer is special because it has so many ingredients in it, it should taste overwhelmingly complex.  We both just thought Beer Thousand didn’t quite “bring it” when it comes to complexity and overall flavor.  It was interesting, but it wasn’t necessarily memorable or overly delicious.  We both just want to urge Dogfish Head to keep doing what they’re doing and pushing the boundaries of brewing, it’s not always a home run, but it is always interesting.

We’d love to hear from you, did you get a bottle of Beer Thousand?  What were your thoughts? Leave your comments below and as always remember: 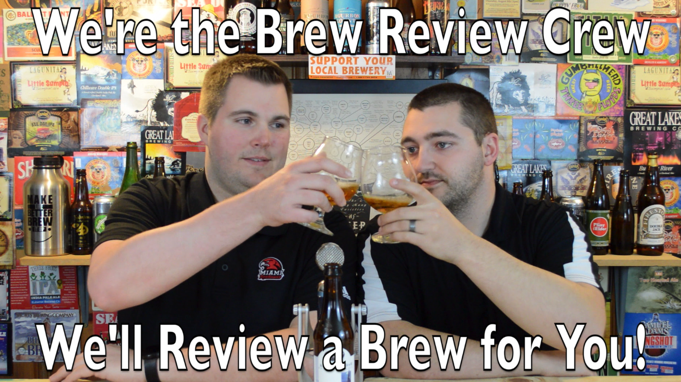