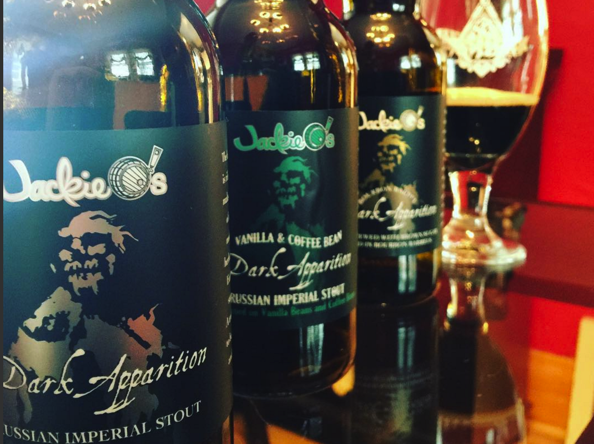 Over the past week, Ron and I have tried three variations on one of Ohio’s favorite beers, Dark Apparition.  This Russian Imperial Stout is brewed by Jackie O’s and is one of the few stouts people outside of the Buckeye State want to get their hands on.  The brewery has this to say about Dark App:

We stuff 2200 pounds of malt into our 20bbl mash tun and by the end of the mash, dark malts are spilling onto the brew house floor! Brad [the brewer] includes great flavors he admires in his favorite Russian Imperial Stouts like chocolate, coffee, roast, dark fruit, caramel, and some nice earthy/spicy hop character. With a midnight black color and chewy, dextrinous body, Dark Apparition is a huge beer with tons of character.

Getting your hands on these beers isn’t always the easiest task.  We found three, tried them one after the other, and gave you our thoughts on these Jackie O’s Dark Apparition variants.

As the video shows, this beer is a real winner.  It is full of chocolatey, coffee-like, burnt grain flavor, and has a mouthfeel that lets you know it is a stout beer.  That being said, there just seemed to be a little bit of room for improvement.  None of the flavors were “off”, but there just seemed to be something missing.  It was like a hot dog without condiments, spaghetti without meatballs, Simon without Garfunkel.  It works well on it’s own, but can only get better from here. Rating: A-/B+

This is one answer to the “it’s missing something” equation, add vanilla and coffee!  While the vanilla notes are somewhat muted, the coffee in this beer shines.  It reminds me of an Imperial Breakfast Stout, or KBS without the Bourbon.  It’s dark, rich, sweet, and is loaded with coffee grounds to the point that I am almost expecting a little grittiness to remain in the beer.  If this variant would have been able to capitalize on the promise of vanilla flavor, this could have been a next-level beer. Rating: Solid A

This is the one we’ve been dying to try.  The Bourbon Barrel Dark Apparition is one of those beers that shows you exactly how much a barrel can elevate a beer.  Jackie O’s struck a great balance of woody, charred, leathery, barrel character, and dark coffee, chocolate, and burnt grains from the beer itself.  This is not a bourbon barrel stout that burns like bourbon, but it has flavors enhanced by bourbon.  It’s big, chewy, and delivers everything you want from a wold-class stout.  While I don’t think this is quite on the same level as the BCBS series, or the Weekday Stout series, it is in the conversation for best barrel aged stouts out there.  Any way you look at it, this is a ridiculously good beer. Rating: A+

I kind of see Dark Apparition as a jigsaw puzzle that is missing one piece.  Jackie O’s has added a lot of different “shapes” to complete that puzzle.  Some are better than others, but every time they add something to this beer, it gets better.  As you might imagine, these got better and better as the brewer used more exotic ingredients.  Unfortunately for us, we have only tried these three variants, but now will be on the lookout for any others that pop up.

If you’ve had these or any other beers from Jackie O’s that you think we should try, let us know in the comments below!