Who is the Craft Beer Drinker?

Who is the craft beer drinker? One of the wonderful things about the craft beer boom and the craft beer community in general is the diverse hodgepodge of people who make up the fabric of the community. It always impresses me when when I walk into a brewery and all around me are are people from every walk of life enjoying the same cold beverage and the same happy disposition. Though the makeup of a brewpub’s crowd is varied, it never really crossed my mind about who drinks craft beer. The fine folks over at SteadyServ have created an infographic built upon demographical research into the question, Who is the Craft Beer Drinker? 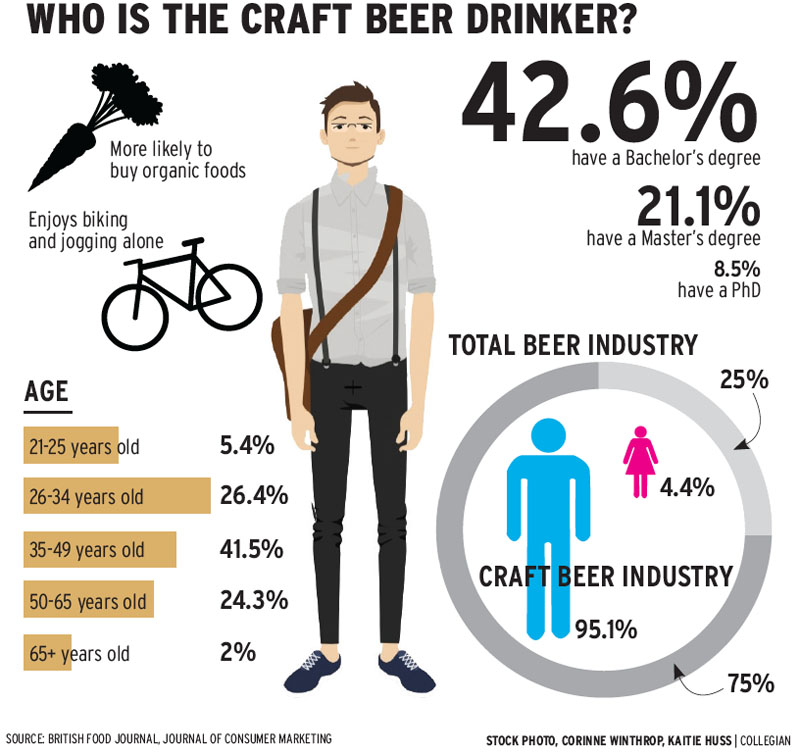 Though the information is presented in a fun manner, I think it brings up interesting questions. The picture chosen to represent the craft beer drinker is a white male….hipster? I wonder how representative that really is. There is obviously an artisanal, crafty, home-grown aspect to craft beer, which goes hand in hand with that hipster culture – however, I am not a hipster, Cory is not a hipster, and I know that there are a multitude of craft beer drinkers who are not hipsters. I wonder how many people who drink craft beer actually like walking and biking alone? Is that really exclusive to craft beer? Maybe people who drink bud-light just do not want their friends to hear them heavily, painfully breathe out of their mouth as they run and bike? I drink craft beer, and I don’t like that either! What about you? Do you run and bike alone? Do you eat organic food?

I wonder if this portrayal of the typical craft beer drinkers is damaging the craft beer experience for others, or if it is harmless. I think it lends itself to hilarious videos like this one:

I really want to know what you think about this infographic? Generally, I think it is very accurate and very reflective of who drinks craft beer; however, I think it is somewhat concerning what this information suggests. Do you think there is an educational gap between macro beer drinkers and craft beer drinkers? Do you think women are disproportionately represented in craft beer? Do you enjoy taking long walks on the beach….alone? Let me know in the comments below!