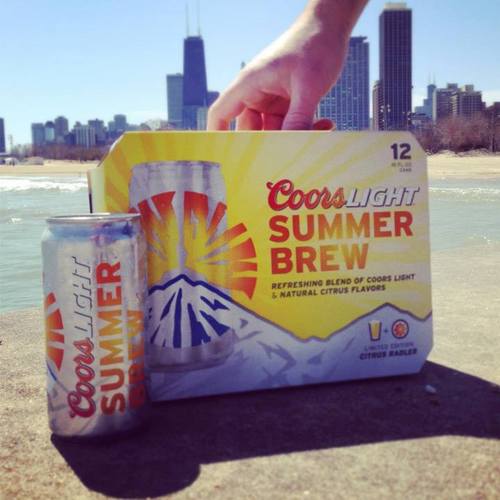 Coors Light Summer Brew – The Worst Beer I’ve Ever Had 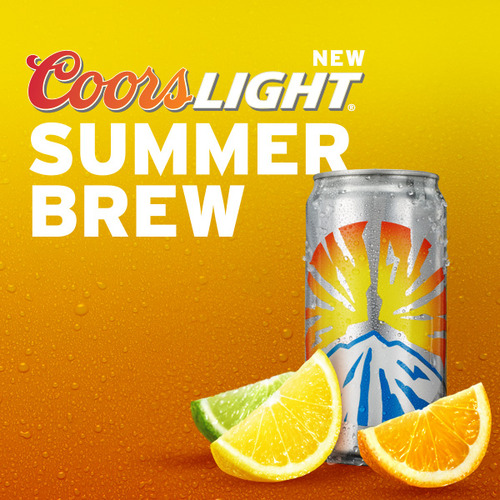 Those who know me personally know that although I love craft beer, and will choose craft beer at a bar if given the option, I am by no means a beer snob. I throw back a Natty quite often – in fact, I have half a case of Natty Ice in my basement as we speak! My vegetable crisper is full of PBR. As proof, here is a snapshot of my fridge at this very moment (don’t judge me, it is payday, we are restocking with craft beer and, well, food I guess, pretty soon!) 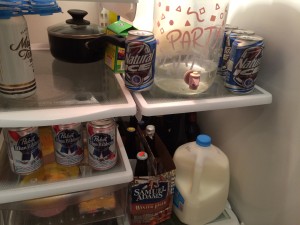 Yes, even I, a craft beer critic, have a special place in my heart for the adjunct lager. Last night, I had the worst beer of my entire life. Damn you Coors, Damn you. Please feel free to leave a comment letting me know that this is not the WORST beer out there. I’d be interested in finding what is worse than this.

The Coors Light Summer Brew is the Coors attempt at a citrus flavored summer seasonal. Their direct competition for the general market would probably be Summer Shandy by Leinenkugel, which I truly enjoy (from time to time). This, to me, is yet another attempt for the Big Guys to get in on the craft beer explosion by adding “craft” flavors to their beers. I will tell you, I was looking forward to this one. Boy, was I ever disappointed.

Here is what Coors has to say about their Summer Brew: “New Coors Light Summer Brew combines the World’s Most Refreshing Beer with a blend of natural citrus flavors, just in time for summer. #LiveSummer”.

Coors is relying on a massive media blitz to sell this thing, so check out their commercial:

Here’s what I thought about Coors Light Summer Brew:

I am going to start out by saying that if you are planning on drinking this; leave it in the can. Upon pouring Summer Brew into my glass, I had a pretty good feeling I was going to dislike the flavor that accompanied it. Summer Brew pours extremely pale, yet slightly yellow with almost no head to speak of, except a very faint one that reminded me of the carbonation you get when you pour a can of soda into a glass. I’m not going to lie, it looked like human piss or lysol cleaning product. Not an appealing look.

Boy. Instantaneously, I regretted my decision to voluntarily put my nose anywhere near this. It smells like Sprite infused vodka, flat 7-Up and watered down Lysol disinfectant. NOW WAIT. Before you close this window, sprint to your car, speed to the store and pick up a case of this (I know the temptation is there with a description like that), stick around for the taste segment. If you’re going to enjoy this, leave it in the can, plug your nose, and proceed with caution.

The moment we’ve all been waiting for. The taste of Summer Brew is honestly almost laughable. The mouthfeel is so disgustingly syrupy, it reminded me of old, flat 7-Up or Sprite that had been left open for days. The flavor was just as disgusting. The “natural flavors” they used are like none I’ve ever had. The citrus flavors tasted synthetic or manufactured and were so in-your-face that I could not detect any resemblance to anything that could remotely be considered to be a beer flavor.

Coors wisely packaged this abomination into 10oz cans rather than 12oz, because they knew that nobody could actually enjoy an entire standard can of this. I almost NEVER trash a beer. I respect the art of brewing, the trial-and-error nature of the business, and most importantly, the craftsmen who put their hearts into creating brews, weather they are good or bad. **** all that, this thing sucks. Whoever the Q.C. guys are over at Coors should have their tongues desensitized for allowing this to pass through the taste tests and onto our shelves. We as Americans deserve better than this, even from the Big Guys.

Overall, I give Summer Brew a 10%, a solid, solid F minus. Easily the worst beer I’ve ever had, Summer Brew was not complex, enjoyable, or even easy to drink like your standard adjunct lager. Summer Brew is atrocious. Sickeningly sweet, syrupy and cloying, fake and quite frankly cleaning product flavoring, this beer is to be avoided. I understand that Macros are attempting to enter the craft beer market with “crafty” like beers (you can be a smart-consumer and use the Craft Check app to make sure you are buying the real deal), but this was a pathetic attempt. I almost want an apology. Even though it was a ten oz can, I dumped it. I really, really tried to give it a fair chance. I hate beer snobs – I can find the good in almost any beer. This tasted like a citrus butt-hole. Do yourself a favor – if you are in the mood for a citrus infused beer, go to a craft bottle shop, and get one that is done right. I recommend Hoppin’ Frog’s Turbo Shandy! 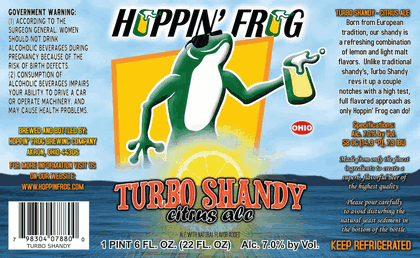