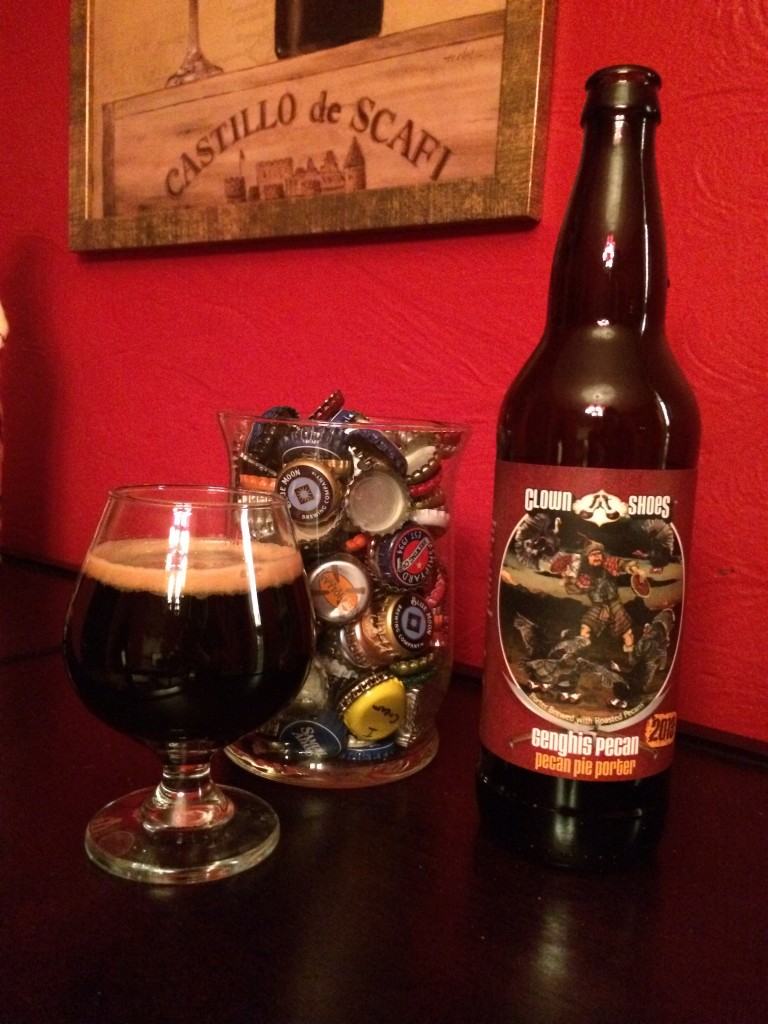 Twas Christmas morn’ when I woke up, looking for something to fill my cup. Not coffee, not eggnog, I wanted booze, when thus appeared a pair of Clown Shoes! “Oh thank you, Saint Nick”, exclaimed I; what better on Christmas morning, than a glass of Pecan Pie?

Firstly, if you are still reading this, thank you for struggling through that with me. It is the Christmas season after all, and what better way to start a review than with a festive poem?

Of all the gifts I was blessed enough to receive this year, the gifts I was most excited about (not surprisingly) was the plethora of new beers! Beers of all shapes, sizes, styles and flavors lay at my fingertips, and the first one I had to try, Genghis Pecan, was a gift from my lovely fiance, Kristen.

As it is brutally cold here in Toledo, Ohio, I love me a good porter or stout. Something about those dark, heavy, creamy beers does a soul well on a cold winter night. I also love pecans in all of their manifestations; pies, roasted, you name it. This beer seemed to be a match made in heaven!

Let me start with the bottle art and name. I absolutely love historical beer names, as I am a history teacher by trade. The artwork of Genghis Khan hurling pecan pies at oncoming hordes is just awesome. The graphic designer for Clown Shoes, Stacey George has done some amazing work. You can see a nice display of his work right HERE. I found it interesting that Clown Shoes found themselves in a little hot water over their beer labels when some folks took issue with the sexual innuendos you may or may not find on their labels. I for one am a big hater of Political Correctness, so I think they should continue making these labels. They are in good taste, light, humorous and I think it helps them stand out. Anyway, for what it’s worth, I love the marketing aspect of this beer. It’s a bottle I’ll be saving to display on my wall. 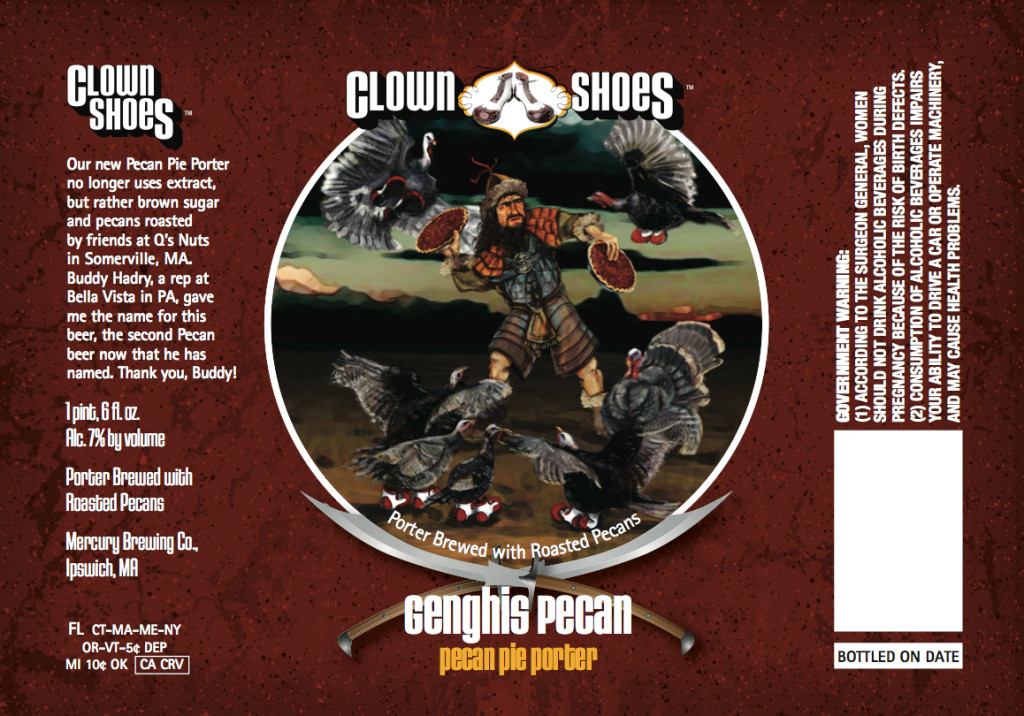 Here is what Clown Shoes has to say about Genghis Pecan: “Our new Pecan Pie Porter no longer uses extract, but rather brown sugar and pecans roasted by friends at Q’s Nuts in Somerville, MA. Buddy Hadry, a rep at Bella Vista in PA, gave me the name for this beer, the second Pecan beer now that he has named. Thank you, Buddy!”

Let’s see what I thought of Genghis Pecan:

Genghis Pecan pours jet black with a motor oil slickness and consistency. It is completely opaque with just a shade of caramel or copper hues at the edges. It is a very good representation of what a porter should look like. The beer is topped with a very nice, fluffy vanilla/caramel colored head.

When the beer was first poured, there was not much of an aroma present, mostly due to cold-shock. As I let the beer warm up a little closer to room temperature, the full range of aromatics were released. Genghis Pecan has notes of chocolate, vanilla, breadiness and nuttiness. There was a slightly oxidized or metallic aroma as well, but not in an unpleasant way. I do wish that there was a more warm, roasted pecan aroma present, as that is one key feature of a pecan pie that I absolutely love.

Genghis Pecan made up for what it lacked in aroma in its flavor profile. I was greeted with a lovely chocolate flavor and it was then when the roasted pecan flavor really came out. It was not as much pecan as I was hoping, but you could definitely detect that warm, roasted pecan flavor, especially in the back end of the beer. I will say that Genghis Pecan had a lovely mouth feel. The beer was thick and slick and really coated my mouth, leaving lasting notes of roasted pecans.

Overall, I would give Genghis Pecan Pecan Pie Porter a 87 or B+. The bottle art alone deserves an A+, but in terms of the actual beer, I felt that it could have been a little more forward with the roasted pecan flavor. I allowed the beer to warm up significantly, allowing the full range of flavors to become apparent, and the pecan flavor profile was always present, but subdued. In the 2014 batch, I’d like to taste even more. The aroma, while nice, was also subdued.

My recommendation is, if you see this in the store, pick it up! It is a great beer that is something different, which in today’s beer world, can be hard to find. You’ll appreciate the artwork (hopefully) and you will have something to share with friends.

Thanks for reading, Cheers!