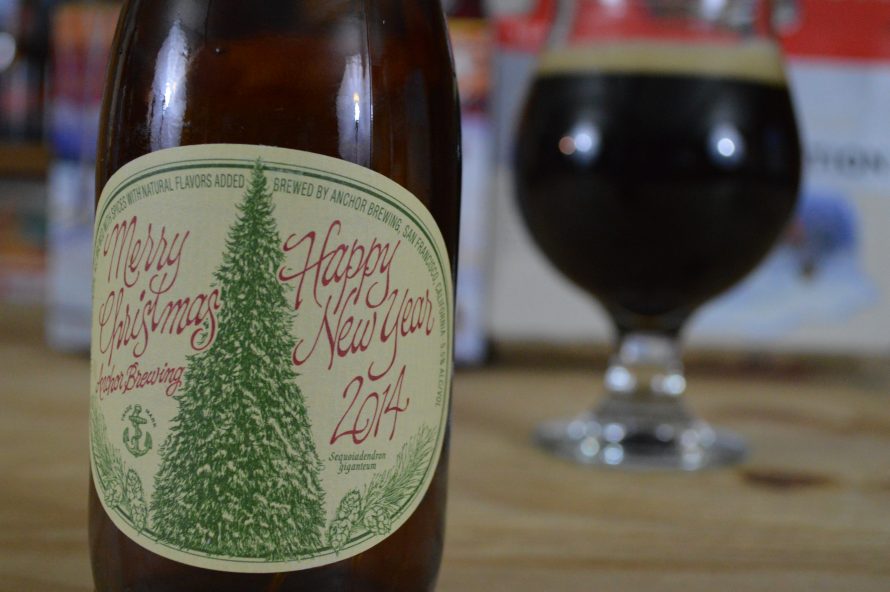 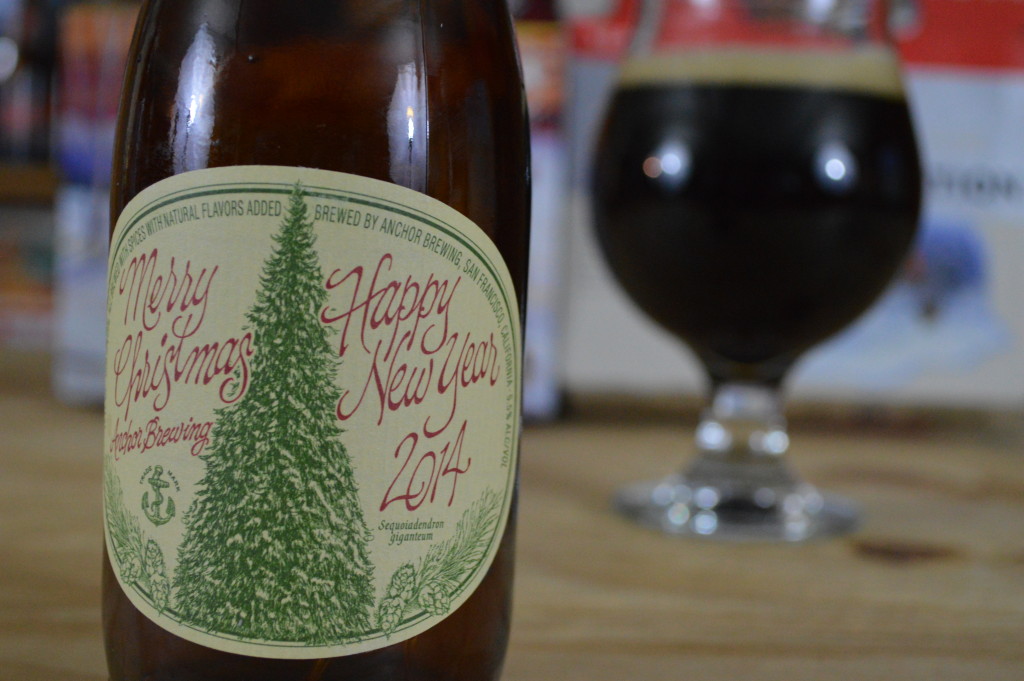 To me, Christmas isn’t about presents, it isn’t about family, it isn’t even about religion; to me, Christmas is about tradition.  When it comes to their Christmas Ale, Anchor Brewing would agree, which is why they have a tradition of tweaking their Christmas Ale every year.  Each time they brew Christmas Ale, they change the recipe and the label, allowing for a fun, festive surprise each season.  In a way, it’s kind of like opening that present from Santa where you had no idea of what is inside the wrapping paper.

It’s Christmas Eve, and I can’t believe this is the last written post we are going to do in this year’s edition of the 25 Days of Beers and Cheers.  To be honest, this is one of the beers I’ve been most excited about.  I have no idea what I should expect out of the flavor here, just that it is a dark ale with spices.  In terms of challenging my beer palate, this will be a very, very fun review.

The 40th edition of Anchor’s Christmas Ale is as dark brown as can be without being black.  It’s like looking at a beer bottle in a dimly lit room.  The head retention wasn’t great, but what has stayed atop of the glass is a thin dusting of cappuccino-colored foam.  When held up to the light, I can see a small amount of red coming through, and I can tell that this actually is a very clear beer even though it’s too dark to easily tell.

Here’s the exciting part of Christmas Ale — guessing ingredients.  My first reaction is that it smells like a freshly baked gingerbread cookie.  Brown sugar and molasses are big aromas, as well as cinnamon and a touch of ginger.  There’s some slight aroma of orange peel, but it’s very faint, and could just be my mind playing tricks on me.  I also get a bit of chocolate, like cocoa powder, as if it was a gingerbread cookie iced with Nesquik.  It smells really, really good.

Christmas Ale is surprisingly thin.  The darkness of the beer made me think this would at least be medium bodied, but instead it is closer to sparkling water.  There is some stickiness on the finish, but it’s soft carbonation and thin body don’t bode well for my need of a hearty holiday ale.

This is one of those beers that tries to showoff more flavor than it actually has.  The aroma was very pungent, but the taste is subtle and full of finesse.  Chocolate, coffee, ginger, cinnamon, and brown sugar are all present — a role call of the holiday season.  The problem is, after the initial sip, this beer is kind of bland.  Maybe I’m getting used to Christmas beers that are full of spices, but the second, third, and fourth sips here are more like weak tea than a winter warmer.  Not that the flavors here are bad, they’re just muted.  After the first wave of brown sugar and ginger, there is a slight burnt bitterness that lingers until the next sip.  It’s got that “roller coaster of flavors” idea going on —  the fact that the flavor changes and develops while you drink it — but it is more like a kiddie coaster in terms of strength of those flavors.

In a way, I’m torn.  I want to like Anchor’s Christmas ale more than I do because I think the idea behind it is so cool, and I think they accomplished the profile that they intended to make.  It’s a lighter Christmas ale than others are, but it has the flavors you expect to have this time of year.  But, when I ask myself if I would recommend this to a friend, the answer is no.  I’m going to give Anchor’s Christmas Ale a 78.  It’s not awful, but it’s just weak, and I felt mislead by the strong aroma.  The ginger presence is nice, but that’s it, it’s just nice.  I want a beer to satisfy my holiday needs, and, unfortunately, this isn’t it.