Cali Blind IPA Taste Test With A Pint of Hoppiness!

One of our favorite parts of starting the BRC is that we get to meet new people from all over the country who have the same love of Craft Beer as we do.  About a month ago on Twitter, we started talking to Mike and Sara from A Pint of Hoppiness, a beer blog based in San Diego, CA., and decided to come up with a way to do come cross-blog collaboration.  The verdict? An IPA Showdown! Ok, maybe not quite a “showdown” per se, but we decided that it would be cool to see what people from across the country thought of our favorite home-state IPAs.  The only stipulation we had is that the beers had to be traditional IPAs — not double, not black IPA’s, not fruited or Belgian IPA’s, just classic examples of what each state thinks an IPA should taste like.

I think it’s fair to say that Ron and I are both hop heads, and some of our favorite beers come from the West Coast; however, we also feel that some California IPA’s tend to be catty and oniony, as opposed to our preferred fruit-forward profile.  We were excited to see what they sent us, but also to see their reaction to our Ohio IPA selection, which you can find here.

So we sat down, took out some pens and got to work.  The video below is our blind taste test of some of their favorite California IPAs:

We broke down each beer blindly based on Color (which we’ll basically skip because they were all almost the same), Aroma, Taste, and then any additional thoughts we had.  Instead of the BRC normal 100 pt scale, we used the 5 star scale as given on the score sheet to keep the game consistent with what A Pint of Hoppiness was doing.

It’s crazy to me that this beer was almost deemed “too old” to rate.  While we both picked up on different aromas, I picked up the tropical and citrus fruits, Ron picked up the chives and Nelson-like aromas, this was probably the most fragrant of the 4 beers we tried.  The flavor followed our noses: I picked up candied orange peel and berry flavors, Ron took a blind guess that it was Alpine’s Nelson.

With this beer, I picked up some sweeter fruit aromas, and Ron had a hard time finding any aromas, but eventually settled on fresh cut grass as his main descriptor.  We both realized that this was a bit more malty, in a crackery/peppery way, than number 1, and a bit drier as well.  There were hints of onion, but this beer was a nice mix of cracker malts and hoppy bitterness.

This is the only beer that deviated from the appearance of the others.  Aurora Hoppyalis was hazier and almost looked like a wheat beer as opposed to an IPA. Of all the beers, this was also the fruitiest in terms of hop aroma and flavor.  Pine was present, but candied orange peel, pineapple, and green apple were abundant in here. This was more like the beers we prefer than the new-age California IPA style.

For us, this was the clear bottom of the pack.  I’m not sure if the Crowler was the issue, or if it’s just personal preference, but Stingray was the most malty of the four, and the only one that had a fusel note at all.  It was oniony, malty, and balanced.  While it was balanced between sweet and bitter, it was missing some of the “hop blast” that we look for in an IPA. I’m sure some people would love this, but in comparison to the rest, it just wasn’t hitting the spot. 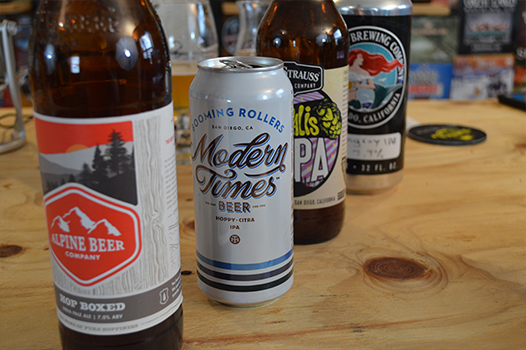 First, this was a ton of fun to do.  Luckily, these were all new beers to us, so not only did we get to try 4 amazing beers, we got to try 4 new beers which is always fun.  Neither of us have had anything form Karl Strauss, though we have heard plenty of great things, and were happy that this IPA lived up to the hype for us.

Second, it as interesting for us to see how similar/different our tastes were when we didn’t talk to each other about the beers while we drank them.  We spent a good 20 minutes tasting and taking notes, and we probably said 5 sentences to each other the whole time.  Yet, at the end of the day, our ratings were almost identical.

Lastly, I feel like this is something we should set up with A Pint of Hoppiness again in the near future.  Fall stout lineup? That sounds like a plan to us!