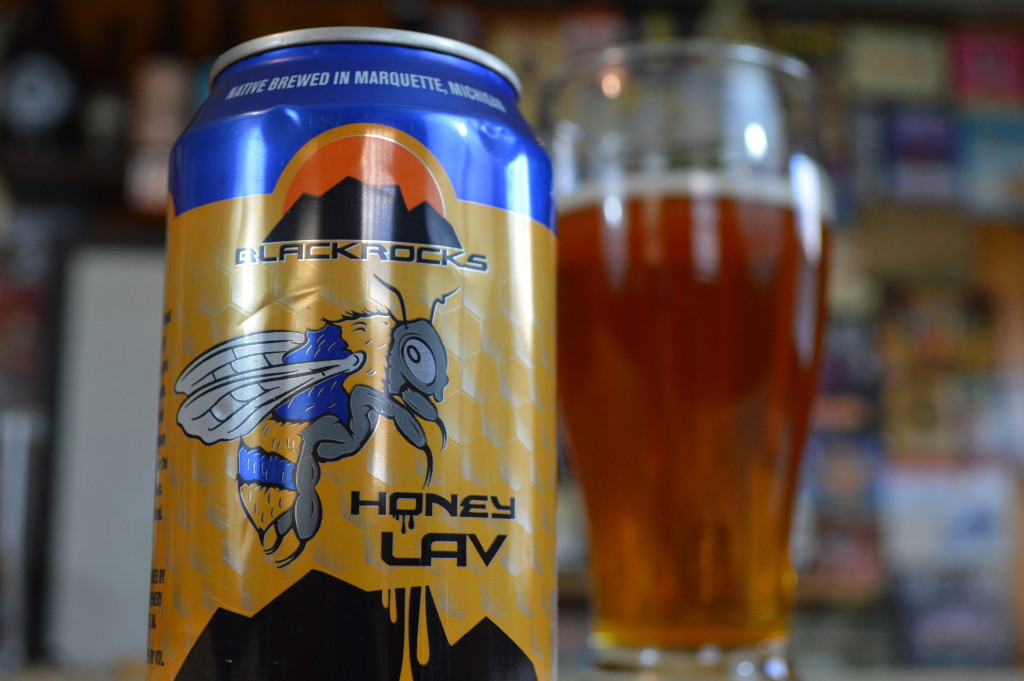 It seems that when people are trying to branch out into the craft-beer scene, they always go to fruity or flowery wheat beers.  Linenkugel’s Sunset Wheat was one that helped steer me away from macro-lagers, but their Summer Shandy, as well as beers like Pyramid’s Apricot Wheat, are summer-time staples that are fun, easy to drink, and full of delicious flavor.  A beer that seems to be entering this category is Blackrocks Brewery’s Honey Lav.

Blackrocks is a fairly new brewery from Marquette, MI, that seems to love making beer, drinking beer, and having fun.  Honey Lav is an American style wheat beer brewed with local honey and lavender.  It’s a limited, summer-time release, that invites the warmth of the season with a drinkable, floral pallate.  But, will this be your new go-to summer beer?

Though Honey Lav is unfiltered, I wouldn’t say this is an extremely hazy wheat ale; it’s cloudiness reminds me more of an IPA than a Hefeweizen.  It pours the color of wild-clover honey, topped with a two finger head which was white as the slopes of Boyne Highlands.  The CO2 rushing to the top indicates a fairly lively beer, which is perfect for a summer-style wheat.

Even from the table I can get a huge rush of lavender from this beer.  It is pungent and reminds me a little bit of handsoap.  When I finally dive my nose into the glass, the honey and malty sweetness of the beer really stands out.  Honey Lav smells sticky and saccharine, with a background kicker of lavender making it seem light and refreshing.  Graham cracker, caramel, and Honey Nut Cheerios all come to mind when I smell this beer, it’s fantastic.

This is an area where I’m a bit let down by Honey Lav.  It seemed to be so vivacious, so full of life in the appearance, but it just was a little thin and slightly under-carbonated.  I would never call it flat, but wheat beers should burst out of the glass, while Honey Lav merely fizzles.  Coming in at 5.2% ABV, this could be considered a session-ale, but even then this beer is a little on the watery side. There is no burn or crazy lingering sweetness, but a very herbal flavor gets stuck to your mouth.  I’m getting ahead of myself…

Woah!  Honey Lav has a big burst of herbal greenness that I didn’t expect from the smell.  I thought it would have a kiss of lavender at the end of the sip, but instead it was like making out with a lavender bush.  In a strange way, it reminds me of gin, too.  It has a very botanical, juniper-esque quality that isn’t quite pine-flavored, like gin is, but it is floral and green.  Behind the botanicals, I do get notes of honey and a slight wheaty, bready quality.  I will say, though, that the honey is subdued in the flavor, and if you’re going to have honey as part of your name, you need to deliver honey!

So is this my new go-to summer brew?  I’m going to say probably not.  I think it’s unique and fun to try, but I can’t see myself drinking a lot of Honey Lavs on any given day.  Although the body of the beer can lead to drinking more than one of these, the herbal aftertaste is a bit too strong for multiple rounds.  I’m going to give Honey Lav an 85.  It’s a good beer, one worth trying, but it just was a little thin, a little under-carbonated, and lacked a little honey.  That being said, if you’re looking for something new and a bit left of center, grab a six pack of Honey Lav and share it with your friends.