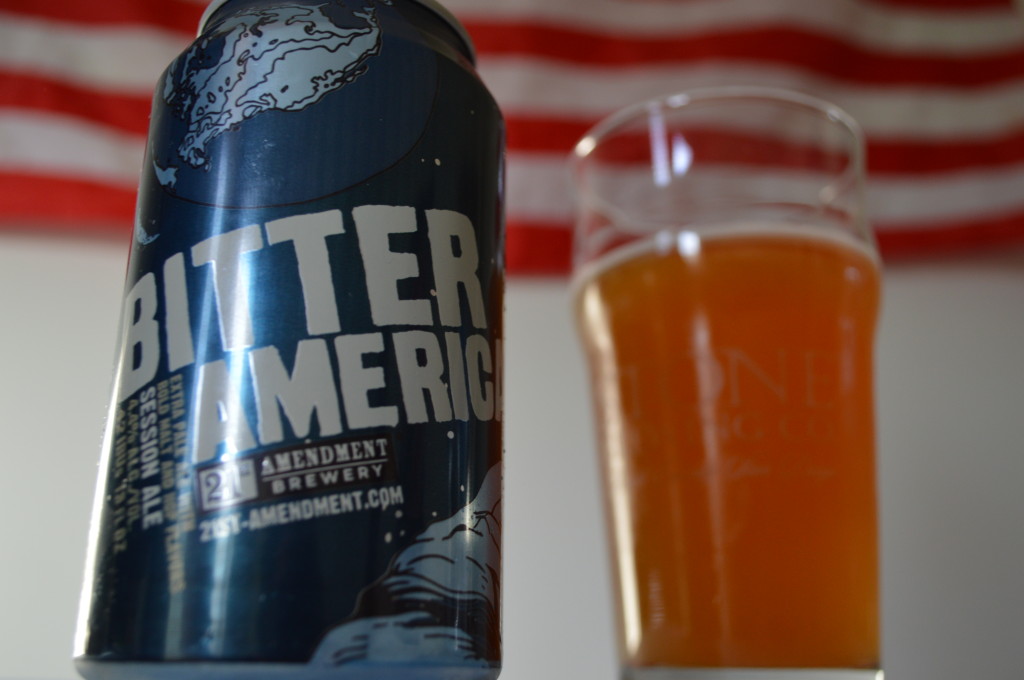 If I were to start a brewery, I’d start one just like 21st Amendment.  Clever brewery name and beer names, beers in cans, great, eye-catching can art, and, most importantly, delicious beers.  I’ve had many of their other offerings, but Bitter American is a new one for me, and it’s seemingly going to hit a sweet spot for me.  As the summer draws nearer, I’m looking for a great session ale that will be high on flavor and drinkability, but low in alcohol so I can quench more thirst for a longer time.

Bitter American is described as, “An Extra pale ale with bold malt and hop flavors.”  It comes in at 4.4% ABV and 42 IBU’s.  That’s a decent IBU count for a session ale, and probably a beer I would love to have as my first drink after repealing prohibition.  Let’s find out.

To be honest, I expected this to be a lot lighter looking.  Bitter American is deep copper and opaque.  The CO2 is trapped like air bubbles in Jell-O, which is usually a characteristic in beers with a lot of body.  The head was pretty pillowy at first, but is now a faint white remnant of it’s former glory.

I’ve been able to smell this beer since I poured it, and it’s sitting 2 feet from my nose.  This thing is bursting with caramel malts and citrusy hops.  It’s almost like sugary lemon zest, but with burnt sugar.  Grapefruit and tangerine show up from the hop aromas, but the malt is just as key of a player here.  It smells like the perfectly balanced scales of justice! 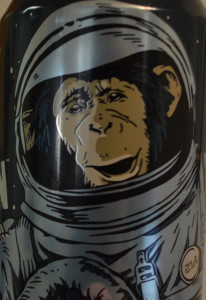 There’s some body to Bitter American, more than your average session ale, but not as much as a normal pale ale.  It is surprisingly light, but the carbonation stings your tongue as you swallow.  There’s a clean finish, not too much lingering hop flavor, and no sticky, sugary, sweetness.  No alcohol is present, but that’s to be expected.

The first sip took me a bit by surprise.  This really is a full-flavored session ale! The first notes are of zesty hops, like lemon rhind, grapefruit zest, and a touch of pine.  It’s floral, and tastes aromatic, if that’s possible.  The malt isn’t as strong as it smells, it isn’t sweet or sticky, it’s just enough to cancel out the hops from over-staying their welcome.  This is a very front-of-the-tongue beer at first, and finishes as a back-of-the-tongue beer.  This is the journey I want in a beer, sessional or full flavored!

Bitter American is another winner from 21st Amendment.  I won’t say it’s perfect, but it is a damn good brew.  I’m giving Bitter American an 88.  I feel that it was a great session ale, but even so it lacked complexity that I want in a pale ale.  It had a lot of great flavors, but it didn’t develop as I drank it.  If anything, it flattened out as I searched for more layers.

All that being said, I would recommend you picking up a case of these for your next cookout, picnic, or fishing trip.  It would be a great match with some lemony fish tacos, or a char-broiled burger!