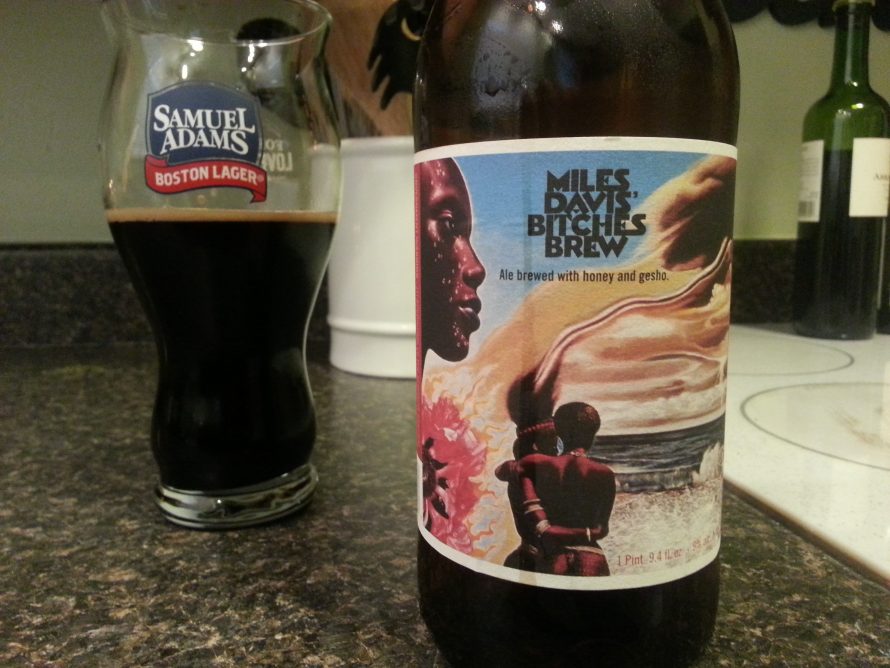 Review By: Cory Smith (with input from Drew Lockhard)

I don’t know that there is a brewery that treats brewing like art quite the way that Dogfish Head does. When they were approached to create a beer to commemorate the 40th anniversary of Miles Davis’ album Bitches Brew, they did their best to put their unique artistic twist on the beer.

As you heard in the video, this isn’t just a stout.  They reverse engineered this to go perfectly with Davis’ favorite foods, and added the unique twist of making Bitches Brew a blend of two different beer styles, just the way Davis’ music blended melodies together so perfectly.  Say what you want about the wackiness of Dogfish Head, you have to at least appreciate their style, creativity, and artistry in their beer making process.

This is the first time I have had Bitches Brew, and I have my friend Drew to thank for picking it up for me.  I’ve been intrigued about this beer ever since I saw the episode of Brew Masters when they showed Sam Calagione and his crew coming up with the recipe for Bitches Brew.  I can’t wait to try it out, so let’s dive in.

Bitches brew is a blend of a lighter and a darker ale, but it looks like a thick, motor-oil-thick stout.  It’s pitch black with a great dark tan head on it.  It is so dark and opaque that it looks like it was painted on the glass.  Based on looks alone, I’m expecting this to be a highly-roasted, thick, coffee-forward, malt bomb.

For some reason, the best way I can describe the smell of Bitches Brew is “stoutly”.  It’s bold, roasted, burnt, and reminds me of a glass of coffee grounds.  It doesn’t just smell like burnt grains, but it smells like charcoal, like a piece of popcorn that has been burnt to nothing but black carbon.  That highly-burnt bitterness then gives way to a slight tart fruitiness on the very back end of the smell.  If I were to take a five second deep whiff of Bitches Brew, the first four seconds would be roasted, burnt grains and coffee, the last second is this cool green apple fruitiness.  Very complex; I almost don’t want to stop smelling it!

Bitches Brew is slightly thinner than I expected.  Maybe it’s because it is a blend of beers that the thickness of the stout has been thinned out, but I just expected to have to chew this beer.  It’s fully carbonated, but not in a biting, harsh way, and has a medium-bodied thickness. Has the body more of a solid porter than what I think of when I drink a stout. 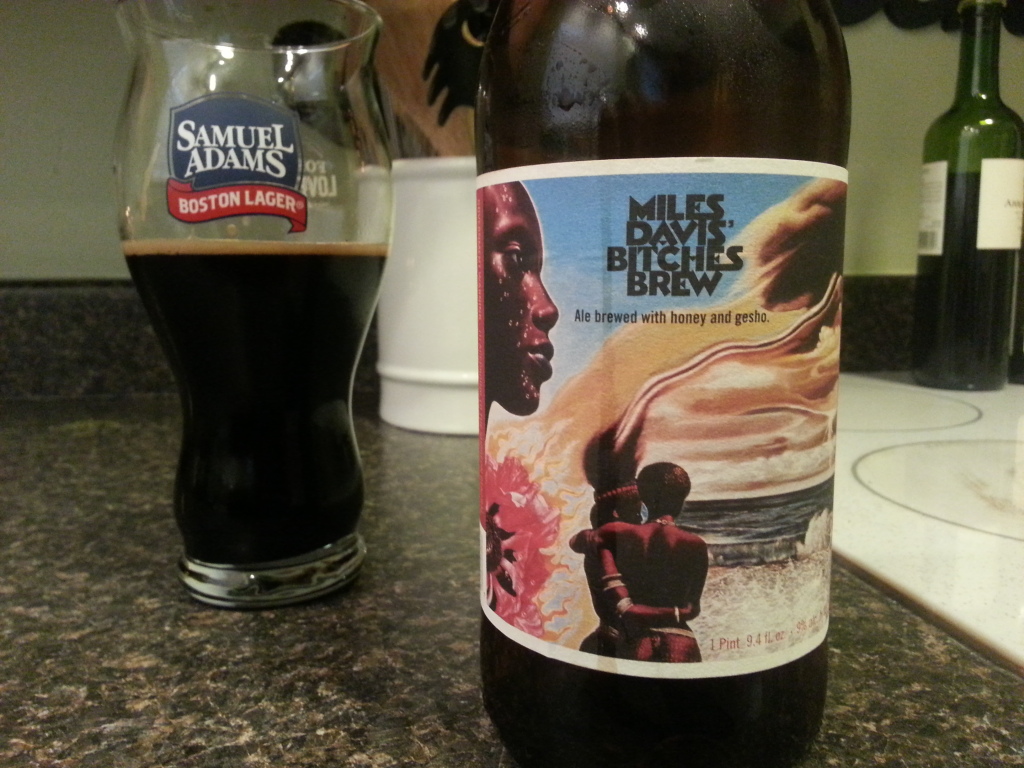 The taste here really follows the aroma perfectly.  There is a huge coffee grounds flavor that is bold and lingers long after you swallow.  Drew actually thinks that this tastes a lot like Goose Island’s Bourbon County, but without the burn or flavor of the bourbon.  I agree, it starts with the same, rich, roasted, burnt flavors, but then mellows away into a floral brightness.  There’s not much of a burn to it, and Drew also pointed out that there isn’t what he describes as “Molasses Mouth” where you can feel the stickiness of the sugars in the beer coating your palate.  I think the addition of honey to this brew adds that bright, airy finish that is much different than I expected when I saw Bitches Brew in the glass.

Much like the music of Miles Davis, I thought Bitches Brew had a lot of notes that, when put together, worked in perfect harmony.  Yes, part of me wishes the mouthfeel was a bit thicker, yes I think the burnt characteristic was a bit too strong, but I overall really enjoyed this beer.  It is a great stout that I would seek out again next year, and for that I’m going to give it a 90.  This is absolutely an A beer, one with a lot of character and complexity, and one that you should seek out if you have the opportunity.