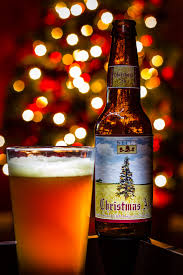 Happy December 5th, ladies and gentlemen, and welcome to today’s edition of the 25 Days of Beers and Cheers series! Today we have a special treat from the Bell’s Brewing Company out of Kalamazoo, Michigan!

Bell’s Christmas Ale is different than your typical winter warmer in that it is brewed without any holiday spices! Typically, when you think Christmas beer, the brew in your imagination is jam-packed full of cinnamon, allspice, nutmeg, ginger and other holiday spices. Bell’s Christmas Ale has none of that; instead, it gets its flavor from the 100% Michigan-grown barley used in the brew.

Here’s what Bell’s has to say about Bell’s Christmas Ale “The basic inspiration for Bell’s Christmas Ale was to create a sessionable holiday beer, using locally grown malt, which would stand apart from the array of spiced winter warmers that are typically introduced this time of year. In contrast to many other seasonals, Christmas Ale doesn’t contain any spices: all of the dry, toasted notes & subtle toffee flavors come from the 100% Michigan-grown barley, custom malted by Briess Malting, while a blend of hops from Michigan & the Pacific Northwest lend earthy, herbal aromas. At 5.5% ABV, it stands as a smooth, highly drinkable beer intended to complement holiday menus, not overshadow them.”

To be honest, I am not too sure on what to expect here with Bell’s Christmas Ale. Even though I KNOW there is no holiday spices, I am still expecting them! Let’s dive in!

The lack of holiday spices should not have any impact on the appearance, or at least one would assume as such. Bell’s Christmas Ale looks every bit the part of a Christmas brew. Bell’s Christmas Ale pours a dark orange/copper hue with ruby tints and a nice, but thin off-white head. The head is made of extremely compacted bubbles of C02 and really reminds me more of a nitro pour! One thing I really appreciate is just how clear Bell’s Christmas Ale is. The clarity is like looking through the crystal clear waters of Lake Michigan, and is a true delight for the eyes. 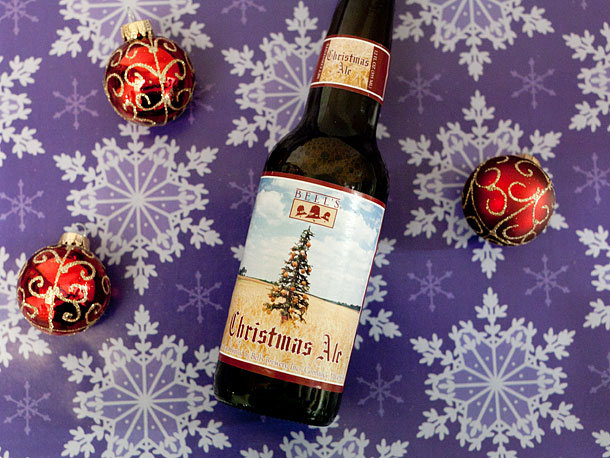 The aroma on Bell’s Christmas Ale is certainly different than any other beer we’ve had so far in our 25 Days of Beers and Cheers series! There is absolutely no holiday spice presence (duh). What I do get, however, is a very nice caramel aroma on the front end, but a nutty/bready or toffee aroma on the finish. There is a very slight aroma of something leafy and green – those hops make their presence known in a nice way.

Huh! What a nice change-of-pace Christmas brew! Bell’s Christmas Ale is really, really nice! Obviously no spicy, ginger or cinnamon presence, but a nice caramel, nutty or bready flavor! Those hops are definitely there, though! Earthy, spicy, dirty hops – yum. The mouthfeel on Bell’s Christmas Ale is really well-done and has a nice, full texture to it. There is a light, airy, sweet, fruity flavor most likely from the yeast addition. There is a slight tingle on the lips and gums on the aftertaste signaling the well-hidden alcohol content and again highlighting the hop presence.

Overall, I give Bell’s Christmas Ale an 93, or an A-. I really enjoy this different spin on the Christmas beer style/Winter Warmer style. This beer definitely stands out among the other Christmas brews just for the fact that it is so different than its peers. For some, this beer may be disappointing, especially if they were seeking a spiced holiday brew. I would like just a smidge more flavor of SOMETHING. Bell’s Christmas Ale is a very easy-drinking brew, but if I had my drothers, I would love to have just a hair more of any one flavor stand out. It almost blends a little too well and risks becoming slightly bland or boring.  To be honest, Bell’s Christmas Ale is seemingly more of a hoppy brown ale or amber ale than what you’d think of a Christmas ale, but it is tasty nonetheless.