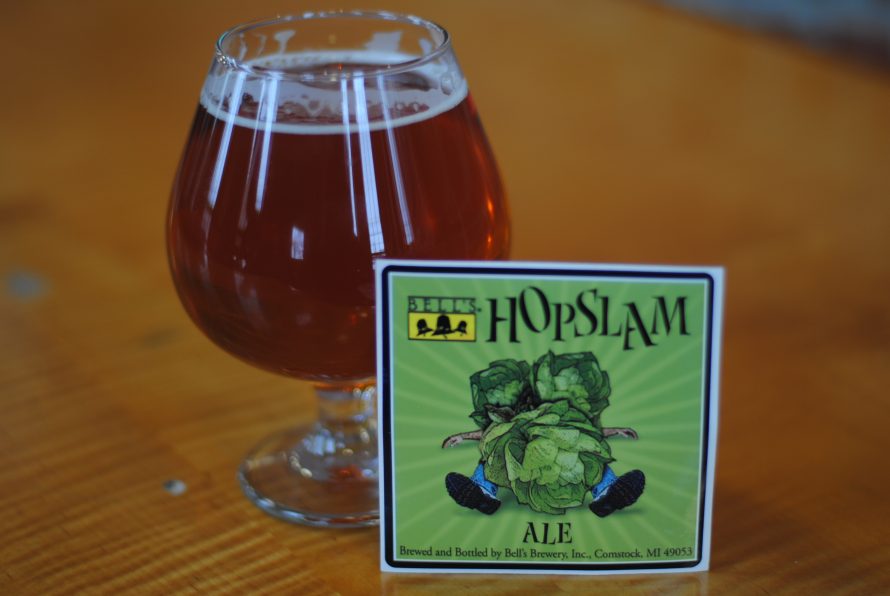 As a senior in college, I stumbled upon a six pack of Bell’s Hopslam.  I was naive at the time, but I knew I liked other Bell’s offerings, I was starting to like hops (seemingly a side effect of homebrewing), so I didn’t think I could go wrong.   I was shocked to find out that it was $20 for a sixer, but went for it anyway hoping I’d at least get a new, exciting experience.  What I didn’t realize, is that I had stumbled upon one of the best double IPA’s in the world! Hopslam is a Winter seasonal offering from Michigan’s largest brewery.  It is also one of the most sought after beers in the Midwest.  I consider it to be Bell’s version of Russian River’s Pliny the Younger, a beer that creates a ton of buzz and leaves lines out the door.  Hopslam is a West-coast style double IPA brewed with six (!) different types of hops and finished with some honey to add balance and body all before being dry hopped with crazy amounts of Simcoe.   It is consistently placed in the ranks of the best Double IPA’s worldwide (#5 by Ratebeer, #2 by Aleheads.com, #14 by Beer Advocate just to name a few), and we are lucky enough to live so close that we could get our hands on some. Actually, we were scared that we arrived too late.  There was a sign on the door of Bell’s Eccentric Cafe’s shop that said “Hopslam sold out”.  Our stomachs dropped.  Luckily, they still had the delicious elixir on tap, so we rushed to the bar and ordered our first pint of the year.  Let’s take a look.

Hopslam is a gorgeous dark-copper beer, with a slight reddish hue.  It pours with a slightly off-white head that clings to the walls of the glass.  In fact, we had to wait almost 10 minutes after we got our beers to take our first sip (due to getting pictures/video set up) and it still had some head floating on top.  One of the things we both noticed was that it was surprisingly clear.  Normally a double IPA can get cloudy and murky, but not Hopslam.  It looks clean and refreshing.

I’m not sure that even Shakespeare could write a good enough description of the smell of Hopslam.  The name Hopslam only half tells the story.  The aroma is pure, fresh, ripe hops with an almost edible amount of lupulin.  It is exploding with citrus, pine, and herbal hop aromas.  Malt and alcohol stand no chance standing out in this liquid hop field.  It is one of my favorite smells in the world.  If I could bottle it, or make it into a candle, I would, and I’d probably become rich selling it.

Hopslam is in between medium and full bodied.  It isn’t like a creamy nitro stout, but it is full, thick, and bubbly.  Bitterness faintly coats your mouth, but the honey and malt backbone of the beer sweetens it out to pleasant and smooth finish.  There is no warmth of alcohol apparent, which at 10% ABV is slightly miraculous.

Citrus, bitterness, pine, and malt collide in perfect harmony, which softly fades into smooth balance and a honey finish.  It’s as if the beer wanted to hit you hard up front, and finish easy.  There’s no lasting bitterness, just huge hop flavor.   Caramel malts are surprisingly present in a beer with such a strong hop focus.  The balance is extraordinary allowing for multiple glasses, and I suggest you drink all you can while you can.  While the term “Double IPA” can be intimidating, I don’t think this is a beer to fear if you’re not the biggest of hop-heads.  While flavorful, it doesn’t kill your tastebuds like other Double IPAs can.

While I knew what to expect beforehand, it’s safe to say that this beer doesn’t disappoint.  It is actually my personal favorite beer of all time.  I think it is as close to perfection as any Double IPA I’ve ever tried.  I can’t give Hopslam anything lower than a 99 out of 100.  It is well balanced, while having hop flavor, and a heavenly aroma. I enjoyed my beer with the Pub Dip sandwich at the cafe, which was made with the same high quality and care that goes into the beer itself.  Simply a delicious meal. I’m not trying to be hyperbolic when I urge you to go out of your way to find this beer.  If you are even a hopehead in the slightest, you will be blown away by just how well crafted Hopslam is.  Whether you get it on draft or in a bottle, you will be  glad you picked it up. -Cheers!