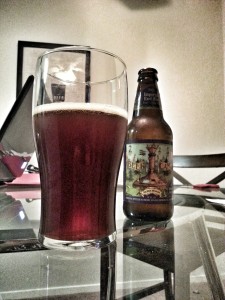 Sierra Nevada is one of those breweries that has transcended the craft beer culture.  Their Pale Ale (at least to me) put them on the map years ago, and they have gotten big enough that some beer snobs (think hipsters) don’t even consider them as “craft” anymore.  I would argue that Sam Adams has suffered the same fate, but I’ll save that for a different day. Then again, just when you think a brewery is too big to be craft, they do something like come out with the “Beer Camp” series.

Beer Camp is the pilot brewery that Sierra Nevada uses to create new recipes, experiment, and give their fans a closer look at the brewing process.  This year, SN released three beers: an IPA, a Belgian-style Black IPA, and, the beer I will review today, an Imperial Red Ale.  Let’s dive in!

I have said it before, and I’ll say it again — there is no more beautiful beer than a bright-red red ale.  While IRA doesn’t quite have that red pop under normal lighting, it’s dark-cherry color is beautiful in its own right.  Imperial Red Ale poured with a thin, tan head that, despite its best efforts, has all but disappeared.  This aesthetics of this beer really shine when held up to a light.  It looks like a Christmas ornament, just pure, dark-red happiness.

First whiff of IRA gives a nice, stable toasted-malt aroma.  There is a little chocolate, some toffee, and a bit of fruitiness as well.  The hops also shine through a tad.  Sierra Nevada says that this beer, “Has no patience for the lupulin leery”, but I think the hops aroma is in great balance with the malts.  Also, there is a slight booze aroma, but, after all, it is 8.5%!

Ron can persuade me to do some things (i.e. switch to the 100 pt scale from the 5 pt scale), but I still find some merit in exploring mouthfeel.  IRA’s mouthfeel is much like that of a thick IPA. It is chewy, viscous, and has great carbonation.  There is a little coat of bitterness that engulfs your cheeks and clings to the back of your mouth.  You almost need to wash this brew down with some water, though another sip will do.

As with any “Imperial” beer, IRA is packed with a myriad of flavors.  I expected this to be a very malt-centric beer, but I was completely wrong.  This is IPA meets red ale.  The first swig is malty, yet bright. The hops drive out the bready, caramel flavors of the malt, and I am left with an aftertaste of grapefruit and citrus.  IRA holds some chocolate notes deep within, but they are quickly overwhelmed by hops, hops, and more hops.  It’s been a while since I’ve had a beer with such a difference in flavor and aroma, and, I’m sad to say, I’m just not loving it.

This is one of those beers that I’m glad I tried, but wouldn’t seek out to order again.  Maybe I felt mislead by the notion of a dark, malty red ale, or maybe this beer just whiffed for me.  Whatever it was, I’d have to give this a 72 out of 100, or a low C.   For me, the hop flavor was over the top, and it just didn’t live up to it’s name.

Sierra Nevada is still one of my favorite breweries, and Beer Camp is still an amazing idea.  I am going to try to seek out the other two beers (especially that Belgian Black IPA!) and see what they have to offer.  As for Imperial Red, if all else fails, at least I can still hold it up to the light and pretend it’s Christmas.