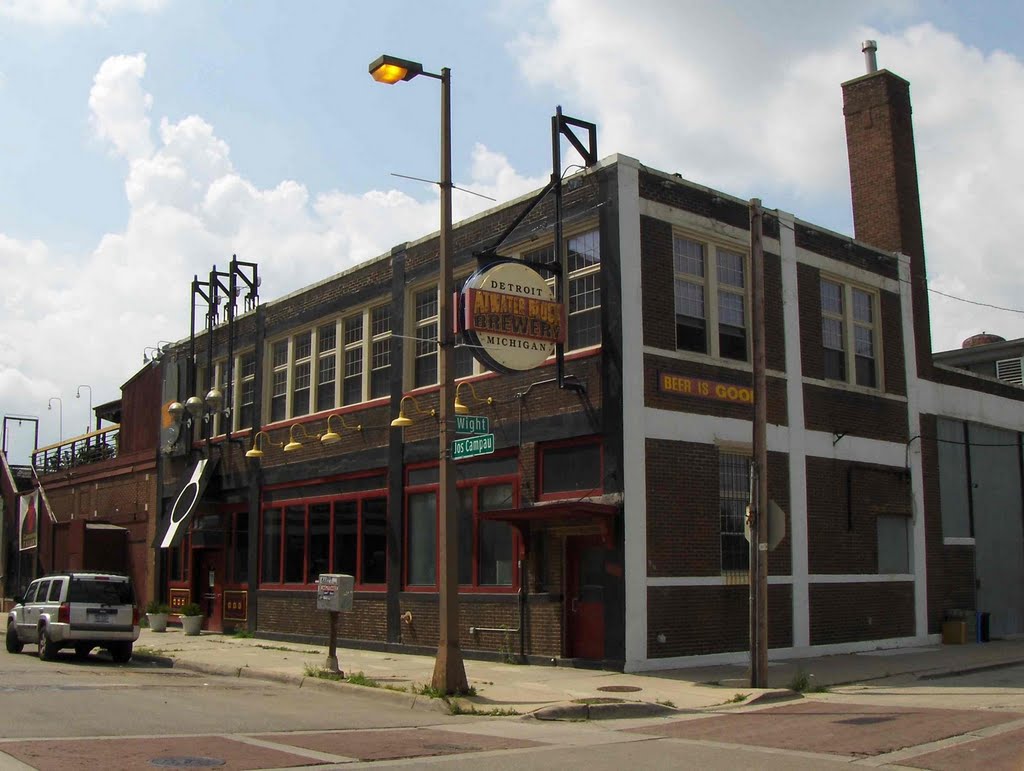 Over the weekend, Ron and I decided to take a trip to some of the nearby breweries in lower Michigan.  One that we made sure to stop in and see was Atwater Brewery located in the heart of Detroit.  Atwater seems to be a brewery from Detroit, for Detroit.  Everything about it reflects the personality of the city itself, which is a beautiful feat to accomplish.

Walking into Atwater, you are sure to be confused.   Unlike a conventional taproom which is near the brewhouse, Atwater’s taproom is literally inside the brewery.  We walked into the open door and had to look around to make sure we were allowed to go inside.  Once we passed the line of fermenters, the active brewhouse, and various other tanks, we found the bar, and our great bartender, Sean.  Ron made the comment that the atmosphere was very “industrial” and very “Detroit”, but it goes beyond that.  This isn’t industrial by design or fashion, this is industrial because we are in the heart of it all.  The bar overlooks the warehouse that contains the brewery, there are even tables underneath fermenting vessels.  They will brew whether people are near or not, and I’m sure the place smells amazing when a batch is being brewed.  Hell, it smelled pretty good just doing a cleaning cycle. 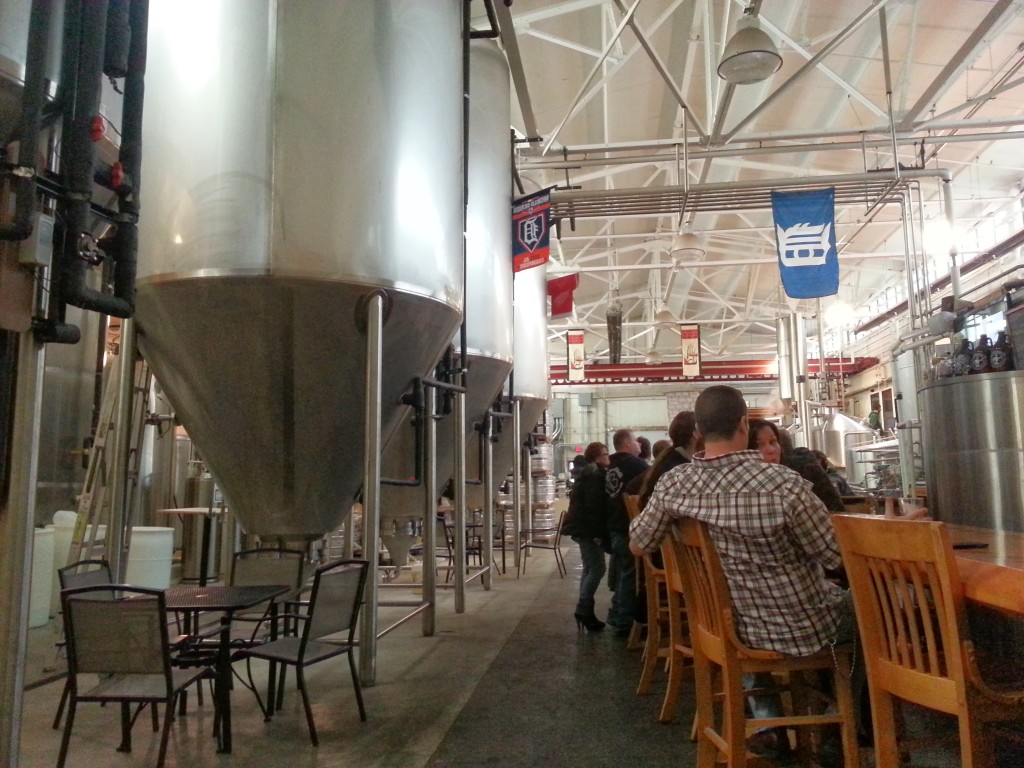 Sean gave us a quick history of the Brewery.  It was originally owned by the founder of Atwater, then sold and taken over by another man, the name was changed and the brewery started to tank.  A third man bought the brewery, resurrected the Atwater brand, and their growth has been exponentially rising ever since.  With an atmosphere, philosophy, and attitude that Atwater has, I don’t see that trend ending anytime soon.

Sean was gracious enough to offer us samples of not only their most popular brews, but as he explained, it was almost like we were drinking an overview of their styles.  Our original flight contained the following beers:

Uber Ursa Imperial Pils — a strong, hoppy, bitter version of a pilsner, unlike any pils I’ve ever had (in a good way),

Winter Bock — a high-gravity beer with dark, caramel flavors and a smooth finish

When we finished our flight, we asked for some drinks that were not widely available, and were given Decadant Dark Chocolate Ale (which tastes just as good as it sounds), and a beer he simply called “Rudy”.  Rudy was our favorite beer at Atwater; hands down.  It was dark, roasty, and bursting with flavor.  It was almost like drinking a cup of cold, black coffee with light carbonation.  If you have a chance to get your hands on it, grab a growler.  Unfortunately, we weren’t able to try one of Atwater’s star brews — Vanilla Java Porter.  I’ve had it before, and it’s delicious, but there’s something about having a beer on tap at the brewery that makes the flavor even that much better.  Vanilla Java Porter and Dirty Blonde combined make up 80% of their brewery sales, and after tasting them all, it’s easy to see why.  Those are both just great brews. 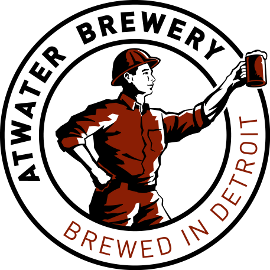 One of the best parts of going to a brewery is getting the tour.  While it’s easy to get the idea of how a brewery runs after one or two tours, it’s the uniqueness of every brewery that keeps me going back time after time.  Atwater’s tour was great becasue of two main components: the first being how up-close and personal you get with the equipment, and second being the tourguide.  We dubbed our tourguide “Disgruntled Dave” because of his hilarious stories about being left short handed on the bottling line while others took smoke breaks.  I picture his days looking a lot like the famous I Love Lucy episode where she can’t keep up with the assembly line at the candy factory, only with more broken bottles.

Besides Dave’s great guidance, the tour was impressive just because of how close we got to the process of brewing.  We were ducking under beams, tasting beers that were still in the aging process, and even got to go on top of the brewing platform to look inside the Mash Tun.  At one point, I looked at the crew that was with us and asked, “Am I supposed to follow him?”  It was just awesome to be able to get that much access to equipment that costs and makes them millions.

Our trip to Atwater was undeniably great.  I loved being immersed in an atmosphere that was so reflective of the culture it serves.  That being said, this is a review site and I just have to get this off of my chest.  at some point during our samples, Ron and I looked at each other and discussed that some of their beers lacked the flavor punch we so craved.  Not that the beers were bad, they really weren’t, just some of them weren’t overly flavorful.  The Imperial Pils had a decent amount of hops and bitterness, but until we tried Rudy and Decadent toward the end of our stay, we were feeling a void of malt flavors.  Rudy definitely shined in this category, and gave us an extremely positive note to end on.

During our tour we found that the lack of flavor might actually be the fault of their filtering process.  Atwater uses a type of filter called a DE filter that is more cost efficient than other forms of filtering, and filters so fine that it can strip some of the flavoring from the beer as it’s being processed.  This was evident when we tried Decadent in the fermentation stage, and then again as a finished product.  Before filtering there was just a distinctly maltier flavor profile.

That being said, Atwater has been doubling in sales every year for multiple years.  Obviously they are doing something right.  They are opening a new location in Grosse Point, and show no signs of slowing down.  They offered us a great selection of beer, many of which I would recommend strongly if you see them on tap or on the shelves (especially the Rudy).  If you’re ever in the area, or looking for a great brewery stop, make sure you hit up Atwater, take the tour, and get the full Detroit experience.