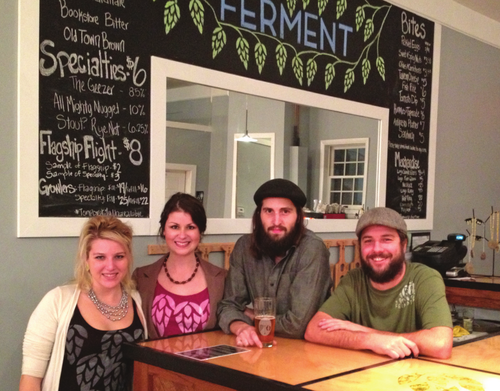 Ah, the beautiful, picturesque, heavenly destination of Traverse City, Michigan. Home to such amazing wine and beer destinations, Traverse City is the best place on earth. One of the neatest places you can go in TC is Brewery Ferment.

Tucked away on a quaint street, Brewery Ferment is a very laid back, friendly spot where you can enjoy some high quality beers. Their tap handles are white and twisted, almost like an old tree. They are awesome.

When we walked in, the brewers were chilling out with some friends watching a Detroit Lions game. I was lucky enough to speak to one of the brewer’s sister who told me the history of the brewery and offered me an AMAZING sour ale. I was so impressed, I purchased two of their beers to take back home with me! Tonight I drank their Traverse City Sour Cherry Ale.

Aroma: Sour Cherry Ale smells absolutely delicious. The explosion of cherry fills your nose immediately. This smells exactly like a cherry wine, especially from Cherry Republic (a cherry food/drink store in Michigan). It is tart and fruity and is absolutely terrific.

Taste: This beer is very, VERY, sour! Right now I am on a quest for the best sour beers, and this one is a killer. Cherry instantly blows up in your mouth and tastes so wonderful. The sour taste is so intense, so tart, that your mouth puckers. It tastes very much like a cherry wine, but has that beer backbone. There is a slight nutty taste on the finish.

Conclusion: Overall, I give Sour Cherry Ale a solid 98% or A+. I am in love with sour beers right now. I also love cherry wine, so this beer is like heaven in a bottle. Not only is this a tremendous beer, but it comes from an awesome brewery. A place where I would love to become a regular. If you get a chance, get your butt to Traverse City and say hi to our friends at Brewery Ferment, and bring me back some Sour Cherry Ale.