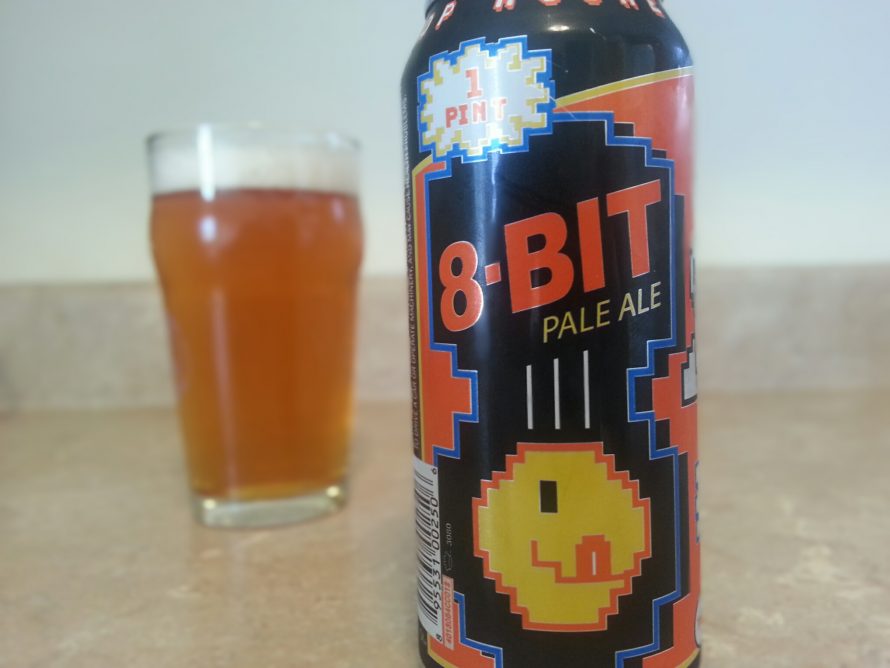 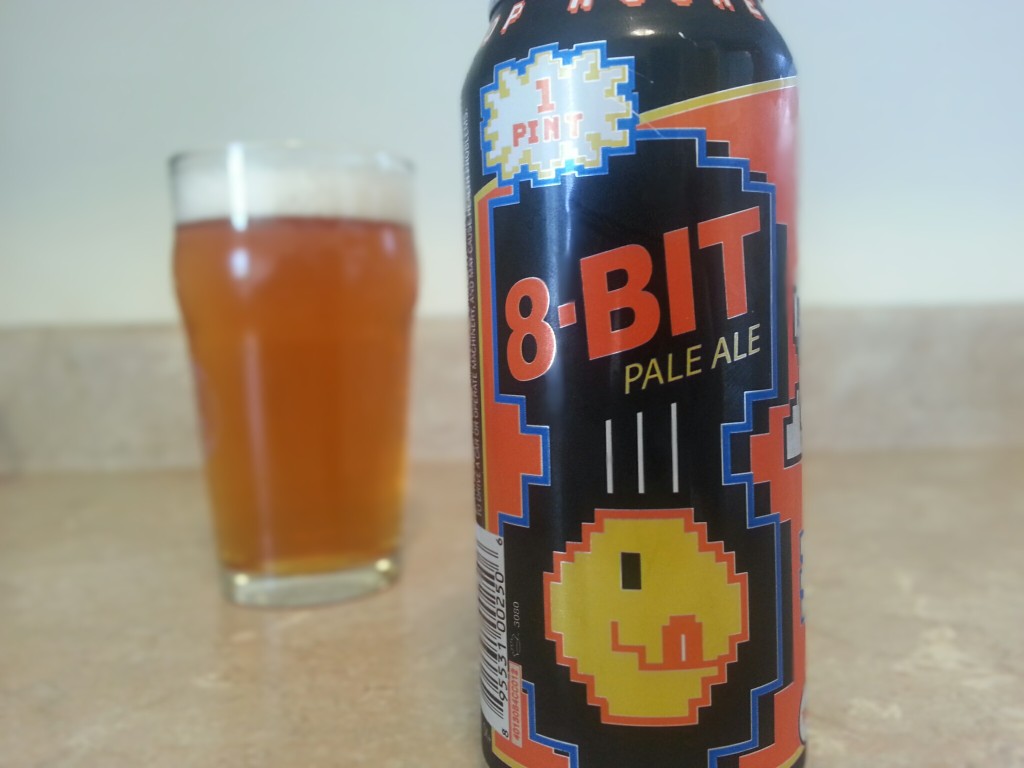 Toledo’s water is not safe – at least not for now.  No one can shower, clean dishes, or even boil water, for the time being.  We have had a bacteria scare in our water supply which is sending people in gaggles to the grocery store to gobble up as many gallons of water as they can.  It’s basically the closest thing we will come to the zombie apocalypse.  Luckily, I have beer.

I’m in the midst of moving, and since we have clean water here, I came down to shower and unpack for a while in my new, but barren house (so barren that I’m typing this while sitting on the floor).  Before I left, I decided it was a good idea to grab a beer I’ve been meaning to crack open, Tall Grass Brewing’s 8-Bit Pale Ale.

Despite having the raddest can I’ve ever seen, 8-Bit also features one of my weaknesses, lately, which is Galaxy Hops.  These hops have just the right amount of tropical fruits, and resinous pine to keep me wanting more.  Coming in at 40 IBU’s and 5.2% ABV, I’m looking to 8-Bit to do more than just quench my thirst.

8-Bit is a copper orange beer, almost as if you dissolved a handful of newly-minted pennies into a pint of water.  The purely-white head stood tall for a couple of minutes, but has since fallen to a lacy topping.  It’s interesting, the lacing of 8-Bit is so sticky, that once the foam settled down, it created like a cool crown effect on the glass, as if to say, “I’m the king of pale ales!” 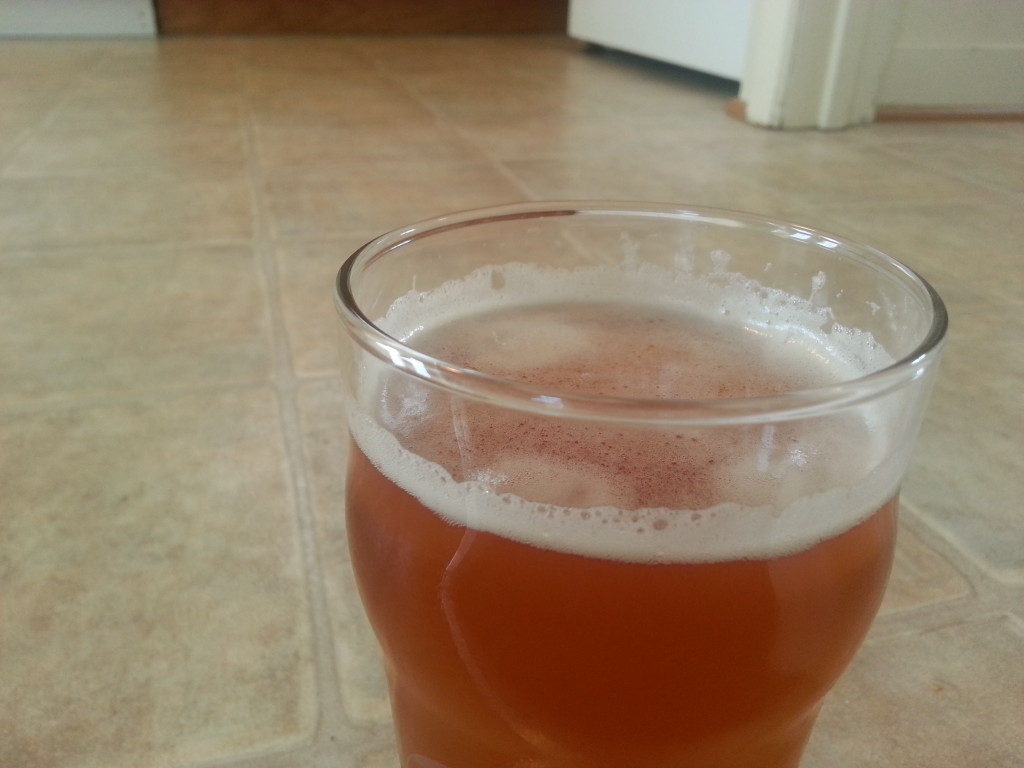 The first thing I get from 8-Bit is a melon aroma, backed up by some green apple tartness.  There’s also a bready, yeasty quality, as well as some rich, caramel malt notes.  To be honest, this doesn’t have the most pungent aroma in the world, it’s quite subtle, but pleasant.

Is there an official word that states that a beer has a “perfect” mouthfeel?  If so, I choose that word.  It is bright, but has some body to it, bubbly, but not champagne-like.  It’s the perfect balance of clean yet sweet, and finishes without alcoholic warmth.  If every pale ale had this body and mouthfeel, the world would be a better place!

More than I expected, I get rich bready flavors from 8-Bit.  It has some hoppy spiciness, but it almost just makes it seem like an artisan bread crust.  It reminds me a little bit of a toned-down version of Firestone Walker’s Double Jack, it has a big malt presence and just a balancing amount of hops.  The hop flavors are there, I especially get grapefruit rind and lemony citrus notes, they just don’t jump out at you.  8-Bit finishes with a distinct bitterness, but it’s not overpowering or off putting in any way.  You get the flavor of the malt, the bitterness of the hops, but nothing really stands out or shines more than anything else in the beer.  Extremely well balanced!

I have to say that I’m a bit let down.  They make it a point to show off the fact that they use Galaxy hops in this beer, yet they don’t let the hops shine they way they can and should!  I appreciate the fact that Tallgrass was able to make such a drinkable and balanced pale ale, but this one just doesn’t have me raving about the flavor.  It’s a good beer, one I’d get if it were on tap, but I don’t know that I’d go out of my way to grab this one.  If you’re someone who doesn’t like a big hop forwardness with your pale ales, then you’d be more apt to buy 8-Bit.  For that reason, I’m giving 8-Bit an 83.  It was good, a solid beer by all means, just didn’t have me saying, “Wow!”  I will say this, though, I’d take a case of 8-Bit’s over water any day, even if the water was clean.