668 The Neighbor of the Beast! 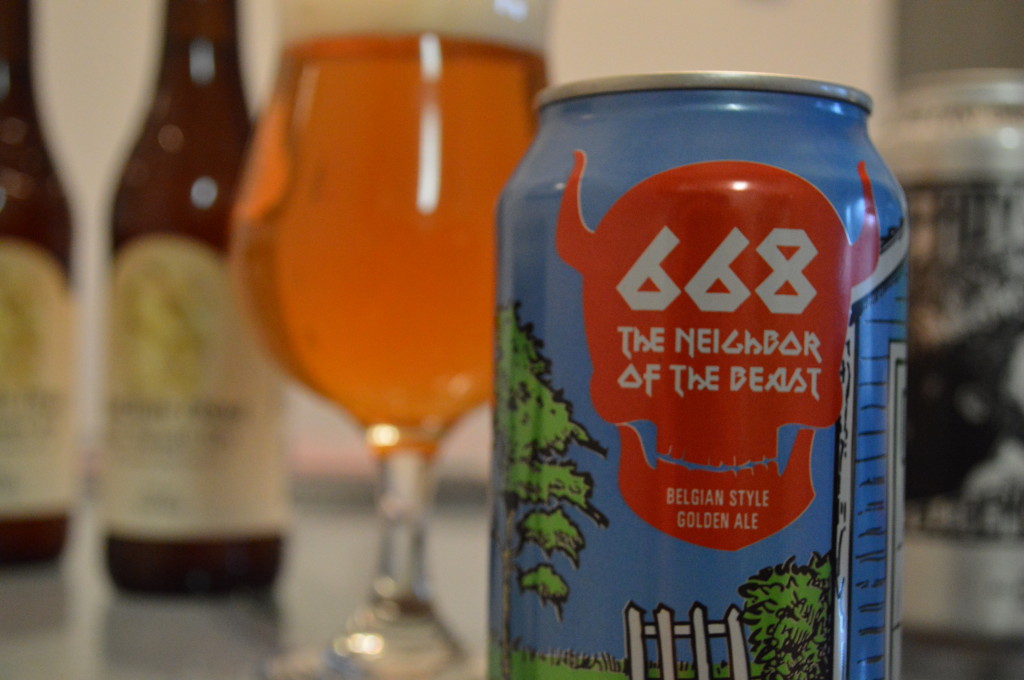 If there’s one thing I love almost as much as drinking beer, it’s trading beer.  Through beer trades, I’ve been able to get my hands on beers that either I never thought I’d try, or beers that I didn’t know existed.  Well, through one trade with a great man named Matt, I was able to pickup three 120 min IPA’s, and, as extras, a Heady Topper, a Focal Banger, two Sea Hags, and this beer from New England Brewing Co called 668 The Neighbor of the Beast.  If Matt thought enough of this beer to put it in the same package as Heady and 120, then it has to be great.

First off, how can you not love that name? The description reads:

‘Good fences make good neighbors’ — unless you live next door to Satan.  then you may need something extra to help you cope — like our ‘668’.  This hellaciously delicious Belgian Style Ale is brewed with pilsner malts, candi sugar, and blended with American and German hops.  ‘668’. Mortal tested… Goat Lord approved.

I can’t imagine this is just great marketing.  Creativity like that comes from people who know what they’re doing, and I have a feeling New England Brewing is a gem that has been hidden from me for too long.

Surprisingly clear, 668 is a deep golden bronze with a head that lasts for days.  The head is slightly off-white, and clings to the glass like frost on a windshield.  I won’t say that this is a brilliantly clear beer, but it is clear enough that I can see the pictures on the can through my Belgian Tulip glass.  The carbonation doesn’t seem to look too high on this, but there are some steady streams making their way out of the brew.

Whew! There is some big “horse-blanket” aromas on this thing.  It smells deeply complex with layers of sweetness, yeasty funk, earth tones, and fruitiness.  Hops are not present, though they might add the slight lemon scent I’m getting.  It’s big and phenolic, reminding me almost of a sour Hefeweizen.  Bananas, cloves, and barnyard run wild in this beer.  Now I get why they call this the Neighbor of the Beast: it’s big and intimidating on the nose, but approachable enough that you’d think it’d lend you some (candi) sugar.

668 has a medium to thin body.  Nothing too big, but it’s not watery by any means.  The carbonation does a good job of cleansing the palate, and also giving some much needed bitterness to this sweet beer.  There is some warmth on the swallow, but at 9% that should be expected.  The aftertaste is only slightly bitter, no IPA-like tongue scraping involved.

This beer just keeps throwing me for loops.  The aroma made me think I was going to be diving into the funkiest Golden Ale I’ve ever had, but the flavors are subtle and delicate.  Bananas make a gentle visit, and so does candi sugar.  Caramel notes are present, but the yeast is doing almost all of the heavy lifting on this one.  There is a bit of a hop bitterness on the aftertaste, but it’s more refreshing than unpleasant.  It helps balance out some of the be phenols and esters in the beer.  There is some alcohol present, but, like everything in this beer, it’s very well in check and in balance.  One of the biggest characters I get here are notes of peppercorns.  White, black, green, all seem to be there and all make themselves known.

It’s hard for me to overlook my bias that I don’t love the flavor of Belgian yeast, but this beer made me a believer.  It is complex and flavorful without being overbearing.  The aroma is different from the taste in that I thought it would be a beer that I’d need to drink sitting down.  It is the first beer I’ve ever finally understood what “horse-blanket” aroma is.  It’s big and funky and scary, but still deliciously drinkable.

I’m going to give 668 a 93.  The devil is in the details with this beer, and if this were a legal document it would be full of fine print.  It’s rich, and bold, giving you all of the yeasty flavors you want from a Golden Ale, while still maintaining a deft touch for those who, like me, don’t want to eat horse blanket.  Drink this beer while enjoying a pretzel and beer cheese, and you won’t be let down.