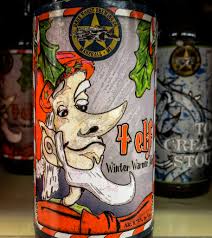 Day 18 of our 25 Days of Beers and Cheers is upon us, and today I’m sampling a special beer from a one-of-a-kind brewery; today I’m going to try out 4 Elf by Dark Horse.  Dark Horse Brewing is from Marshall, Michigan, and has gained a lot of popularity from their recent TV show, Dark Horse Nation.  Their ideas are all a little out there, and they just like to make “badass beer”.  4 Elf is no exception to that ideology.

Clocking in at 8.75% ABV, this spiced winter warmer is sure to keep you from catching any type of cold-related illness.  It is a beer brewed with nutmeg, clove, cinnamon, and allspice, and it should be as big and bold as the brewers themselves.  Unfortunately for many, including my beer trade friend from TX, Grant, this beer is only around for a short time, and is not very easy to get ahold of.  Luckily, my local shop had some on hand last week, so I knew I had to grab one.  Let’s dive in. 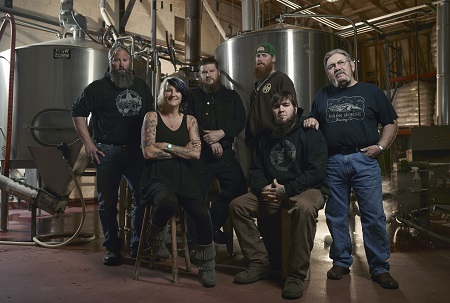 Just by looking at 4 Elf, I would assume it is a porter, or maybe a Belgian quad.  It is a deep, dark, chestnut brown, bordering on black, with a thin khaki lacing.  Not much light is coming through this beer, though the small amount that can permeate the edges reflect a brilliant red hue, reminiscent of the Holidays.  It looks thick and rich, like a perfect winter warmer.

The allspice and clove in 4 Elf reminds me more of a pumpkin ale than a Christmas ale.  The spices are the first things that hit my nostrils, followed by a brown-sugar-like sweetness.  Dark fruits — figs, raisins, and dates — are seemingly covered in molasses and then rolled in these holiday spices.  This beer smells like candy.  It’s hyper sweet, but still has a little bit of burnt barley and roasted coffee aromas to keep it grounded.  I’ll say one thing for sure, complex is too simple of a word to describe this aroma.  Wow!

Finally! This is a Holiday beer that gives me the thick, full bodied mouthfeel that I’ve been craving on these cold nights.  It is full, but not too syrupy, carbonated, but not harsh, and smooth and creamy.  There is a slight alcoholic burn to it, as well as  a residual bittering that clings to your tongue. 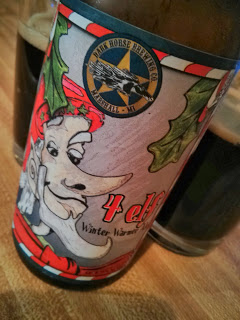 The taste follows the aroma almost to a T.  I get figs, and I get molasses, and brown sugar, and coffee, and allspice, and a holidaycheermixedwithharvestfestival explosion!  This is a beer that literally explodes onto your tastebuds, but is still drinkable enough to be enjoyable.  There is a lingering bitterness from the burnt grains used in the mash, and the spices attack you from different angles.  Allspice and nutmeg first, then cinnamon, then clove.  It’s like they are on a timed release and mixed into a sugary elixir to be released during the Holidays.  Very cool stuff, Dark Horse.

Well, Grant, I hate to say it, but I probably screwed up by not sending you a bottle of 4 Elf.  This beer is pretty awesome, and is everything that Dark Horse wanted out of a holiday beer.  It is badass, and can hold it’s own against any of the more critically acclaimed Christmas Ales out there.  I’m going to give 4 Elf a 95, A.  I think it’s a solid beer that, maybe inadvertently, acts as a fusion between a pumpkin ale and a Christmas ale.  It is a spicy collision of Winter and Fall, and could really be served during either season.  It’s one of the few spiced beers where the spices are on the forefront of the flavor without being overpowering, they blend very well with the malts and the darker fruity flavors built into this Winter Warmer.  Make sure you pick up a 4 pack of 4 Elf if you see it on your shelf.