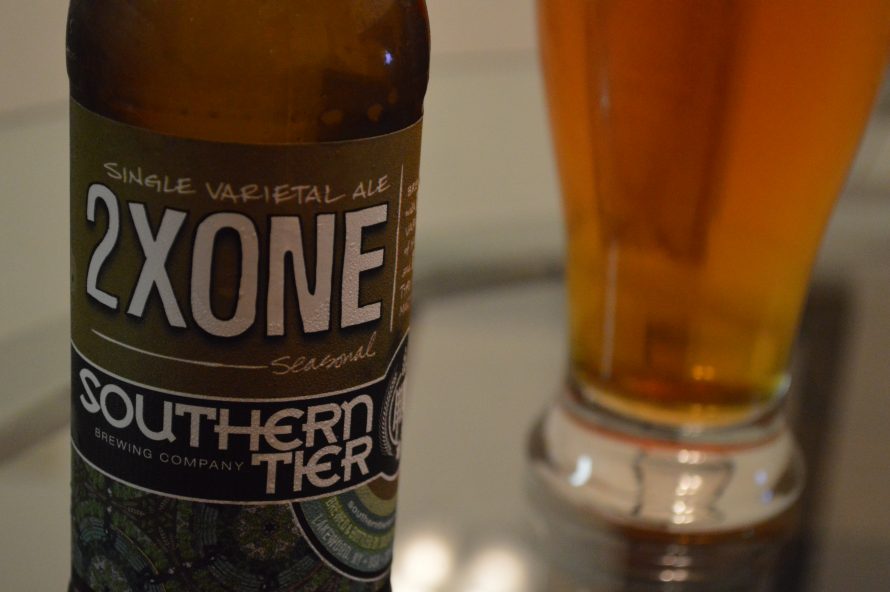 KISS.  No, I’m not talking about the legendary Detroit-based rock band, or even playing tonsil hockey, I’m talking about the method that everyone should live by.  Keep It Simple Stupid!  That had to be the message that Southern Tier lived by when creating their seasonal Pale Ale, 2xOne.  Why?  Well, it gets its name from the way it’s brewed — using one malt, and one hop.  Most beers, as you may know, are brewed using a secret mix of malts, and a myriad of hops in order to create a one of a kind experience.  Southern Tier wanted to show off the beauty of simplicity, and showcase the flavors of Mosaic hops, and Special Pale malt.

While I know about many hop varieties through homebrewing, Mosaic is one I have never used, but one that is getting a lot of buzz.  I did a little research to find out what I was getting myself into, and this is what Rebel Brewer has to say about Mosaic Hops.

Also known as HBC369, Mosaic is the first born child of Simcoe. Some have described it as Citra on steroids, but it’s much more than that. Rich in Mango, lemon, citrus, earthy pine, tropical fruit, herbal and stone fruit notes.

Not much is out there about the malt used in 2xOne.  Special Pale malt is something that only one company seems to produce, and I’m not sure if that’s the same grain used by Southern Tier.  I guess that means that I’ll have to do investigation by taste!

I don’t know if this is good filtration, or the product of having so few ingredients in the beer, but this thing is crystal clear.  There’s a little bit of that particles-stuck-in-Jell-O thing going on, but it’s just about as clear as it gets.  2xOne has a rich, gold color, that plays chameleon as it blends into it’s background objects.  The head, what little there was, was bright white, but has left me now with nothing more than a lacy veil.  One thing I will say about this beer, though, is that it does not lack carbonation at all! It’s a fireworks show in a glass!

So, what do mosaic hops smell like?  As mentioned in the quote from Rebel Brewer, f you’ve ever smelled Citra hops before, it’s similar to that.  Big tropical flavors; mango and pineapple lead the way here.  Apricots, peaches, and a slight grapefruit note all round out the aroma.  The malt doesn’t make too much of a presense in 2xOne, but there is a slight biscuity flavor that I’m guessing comes from the pale malts.  It’s a bit like fresh baked bread smothered in a piney, mango jam.  Mmmmmmm, mangos!

2xOne is a bit thinner than I expected.  Though, I probably shouldn’t have expected a ton of body without any other malts to help out the Special Pale.  It isn’t watery though, just the right mouthfeel to make it a perfectly drinkable beer.  Carbonation is medium to high, allowing the hop bitterness to really shine through.  There isn’t much alcoholic presence, or warmth at all though, which at 8.1% is very impressive.

What a great, clean beer!  It’s sweet on the front of the tongue, and has a lemony, citrus-rind flavor going down.  2xOne then finishes with an explosion of tropical-fruit greens.  It’s what I’d imagine an under-ripened pineapple tastes like.  There’s also fist full of mango ready to punch you, right before you think you’re done experiencing the flavor.  It’s wonderfully bitter, but balanced out well enough that you’re not drinking hop bitterness, you’re drinking hop flavor, and when you only feature one hop in your beer, thats the approach you have to take.

One malt, one hop, one extraordinary beer.  This is the type of brew that is right up my alley.  I’m a sucker for tropical flavored hops, I’m a sucker for clean, drinkable beer, and I’m a sucker for big ABV with little alcoholic burn.  2xOne has the hop flavors of an IPA, but the bitterness of a pale ale.  It’s so simple, yet deceptively complex.  Really, the worst part about this beer is that I only have one!  I’m going to give 2xOne a 95 A.  The only thing I’m taking off points for is the sticky sweetness left over after drinking.  I feel I need some water next to me as I get deeper into this glass.  That being said, 2xOne really blew me away it has so much flavor out of so few ingredients.  I wish this wasn’t a seasonal brew, because it could be a staple in my fridge year round!