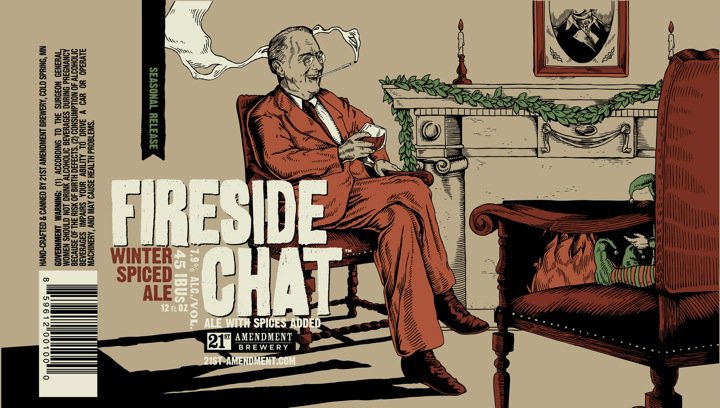 Ah, Black Friday. The day when the most ambitious of we Americans bombard local stores at ungodly hours to claim the best deals on this holiday’s most-wanted items! While I have indeed partaken in the insanity that is Black Friday in the past, this year I decided to sit it out and relax at home with the fiance. We are, after all, still recovering from the abuse we inflicted on our stomachs from yesterday’s feasting festivities.

It is absolutely freezing in Toledo, Ohio, and what better way to warm up these old bones that to sip on a winter warmer? Today’s selection: 21st Amendment Brewery’s Fireside Chat.

As a US History teacher by trade, I absolutely love 21st Amendment. It has an awesome name that reflects the Amendment that repealed prohibition, killer can art that is always eye-catching and interesting, and finally, they make very solid beer. When I discovered Fireside Chat, I knew I had to give it a try.

If you’re not a history geek like myself, you may not understand what the Fireside Chats were in American History.

Between 1933 and 1944, President Roosevelt gave 30 national addresses via radio, dubbed the Fireside Chats. These were revolutionary because it was the first time that the President had direct and intimate conversation with the American public. Radio was also pretty great for FDR because it hid his symptoms of Polio from the public eye. These radio communications became vital for FDR as a means to explain his social policies to the general public. Americans loved these chats, and helped make FDR one of the most popular US Presidents in history.

Here is what 21st Amendment has to say about the Fireside Chat: “Like FDR’s Depression-era radio addresses, which were like a kick in the butt and a hug at the same time, our Fireside Chat is a subtle twist on the traditional seasonal brew. We begin with a rich, dark, English-style ale and then we improvise with spices until we know we have a beer worth sharing with the nation.

Fireside Chat is our early winter seasonal brew available from October through December in six pack cans and on draft. Brewed like a classic, warming Strong Ale but with a subtle blend of hand-selected spices for just the right festive flair.”

Here is what I thought about Fireside Chat:

Appearance: As a history teacher, I absolutely love the can art and the overall theme. Love the idea of the fireside chat and wish we could to back to that era in US History where the President and the media had a positive relationship, and we had a positive attitude towards our elected officials.

Fireside Chat is dark reddish/brown. The beer looks black in the glass but has some transparency when held to light. There is a nice, white head and really nice white lacing down the side of the glass as you drink the beer.

Aroma: Fireside smells of a caramel sweetness with serious spices.  Cinnamon, nutmeg, allspice all seem to be present. It smells similar to the multitude of pumpkin spiced beers I enjoyed in the Fall. This beer is very pleasant on the nose, and really gives the feel of walking into a candle shop that is displaying all of their Christmas themed candles.

Taste: Fireside Chat is very spicy. Not spicy in a Mexican food way, but in a pumpkin pie spiced manner. There is almost a pumpkin pie taste in the mouth, which is quite lovely. Somewhat surprisingly, at least to me, I detected a little hop bitterness on the back end. Again, there is not an explosion of spice, but a nice, complimentary amount.

Conclusion: Overall, I’d give 21st Amendment’s Fireside Chat a 91, or a B+.  I really enjoyed the taste of the beer as well as the awesome label art, and the connection to US history, my first passion, is an instant plus for me. Where the beer could be improved is in the lingering aftertaste. I was not thrilled about the hop profile I picked up. It was not terrible by any means, but it just wasn’t what I was expecting.  I should also note that this is pretty big for being 7.9 abv. I felt a pretty good buzz from it, so drink with caution.

So get on out there any try this! Remember, in the words of FDR, “The only thing we have to fear, is fear itself!”