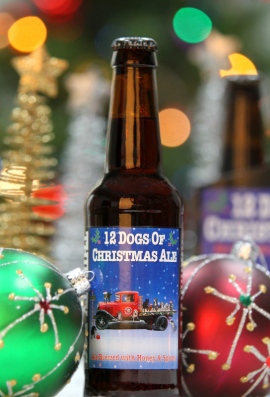 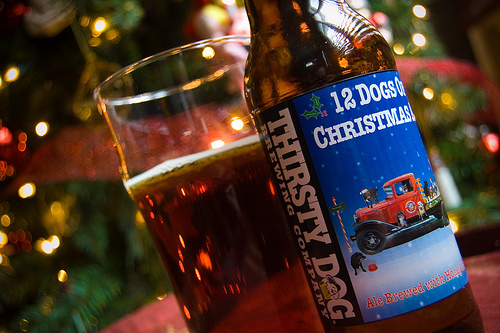 Happy December 2nd! Thank you for checking out today’s issue of our 25 Day’s of Beers and Cheers series! Today, we have the very popular Christmas Ale/Winter Warmer called 12 Dogs of Christmas. This brew is out of the Akron, Ohio area brewed by the Thirsty Dog Brewing Company. Of all of the Christmas Ales available in our area, 12 Dogs of Christmas is hyper popular and highly sought after. Despite the iconic status  of this beer in the world of Christmas beers, I have somehow avoided sampling it – until now. I feel like Christmas has come early as I pop open 12 Dogs of Christmas so early in our Christmas beers series! Here is what Thirsty Dog has to say about their 12 Dogs of Christmas “This beer’s name sums up the ideas of bringing the best together to celebrate. It is filled with seasonal flavors from generous amounts of toasted and caramel malts, mixed with equally generous amounts of honey, cinnamon, ginger and nutmeg. We feel it is the perfect libation, filled with flavors of the season.

Let’s dive in and see how 12 Dogs of Christmas stacks up in our 25 Days of Beers and Cheers!

12 Dogs of Christmas pours a lovely dark brown/ruby red color with hints of iron-like orange/red hues. A nice, yet thin white head sits atop a well carbonated brew with streams of cO2 flowing to the surface. The aroma is very typical of the winter warmer/christmas ale style. One nice feature that stands out about 12 Dogs of Christmas is the clarity of the beer. Staring through this beer is like looking through a ruby window pane. Truly clear and beautiful.

Upon sipping on 12 Dogs of Christmas, my pallet is met by all of those Christmas-like spices. A very sweet (hello, honey!) yet spice-filled flavor abounds. The cinnamon/nutmeg combination lingers long after you finish your sip – almost to a fault. Unfortunately for 12 Dogs of Christmas, the mouthfeel is a bit watered down and thin. While the flavors are delicious, I just wish it came through a bit more full-bodied.  This brew is definitely full of caramel/malty sweetness and really tastes like a holiday treat! Don’t expect much of a hop presence in 12 Dogs of Christmas. Aside from a very, very slight grassy note that hides under the spicy front-flavors, this beer is a fairly straightforward malty, spicy Christmas Ale.

Overall, I would give 12 Dogs of Christmas an 88, or a B+. I love that an Ohio-made craft beer has gotten so much national popularity, and I really do love the aroma and flavor. The detractor, however, for me is the mouthfeel. The thinness of my pour was enough to knock some points off of my rating, though by no means is this a flawed or poor beer. I highly recommend trying this one out – though it is not likely to be your favorite Christmas ale or Winter Warmer out there. This is a very straightforward, typical example of the style – though not memorable in any one way.