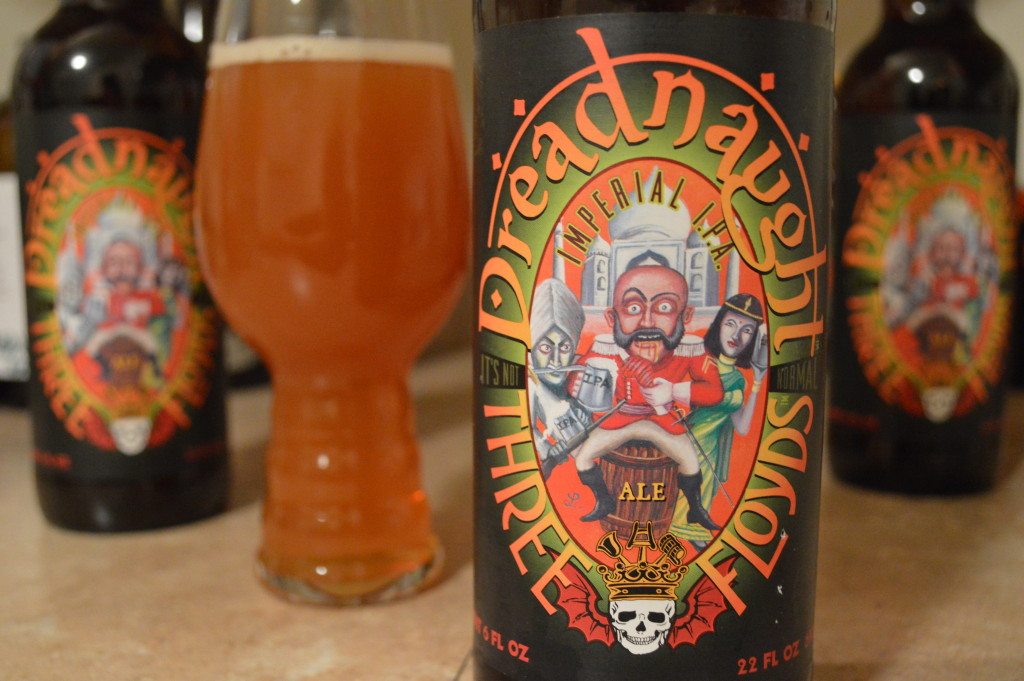 Almost a year ago, Ron and I went to Akron to visit Hoppin’ Frog when Fred, the brewer at Hoppin’ Frog, told us he was going to announce the guest tap for the day.  He stood up, grabbed a mic, and announced that the guest beer was none other than Three Floyds’ Dreadnaught.  I’m all for breweries sharing beers to showcase, but I think Fred made a small mistake because after taking one sip of this Double IPA, I realized that Dreadnaught might be the best beer they had on tap.

Since that glass in Akron, I’ve been dying to get my hands on a bottle of this delectable DIPA.  We’ve had Zombie Dust, Alpha King, Apocalypse Cow, and Arctic Panzer Wolf, but none of them have had me craving another visit the way Dreadnaught has.  Fortunately for me, my family visited the brewery (without me) and picked up a couple bombers to satiate my needs.

Dreadnaught is an Imperial IPA brewed with I know I’ve been dreaming of more Dreadnaught, but is it really the best IPA in Three Floyds’ award winning catalogue?  Let’s find out.

Dreadnaught pours a light orange, almost copper color.  The beer itself is hazy, almost to the point of being opaque, and is topped with a beautiful lacy head.  It almost even looks like a fresh apple cider; it’s rustic and appears “hand-crafted”.  This is what an Imperial IPA should look like, not stripped of flavor, not overly-processed — beautifully ugly.

This DIPA is bursting with citrus aromas.  I get a lot of Orange peel and even some orange juice, followed by grapefruit rind and lemon zest.  Almost every tropical fruit is present in this one.  When people describe the typical “American hop”, they need to look no further than the aroma of Dreadnaught.  Peach and pine make their presence known, but they play second fiddle to the initial citrus bomb.  Behind that sweet, juicy fruity aroma, there is a caramel sweetness as well.  It actually smells like it’s going to be a bit too sweet and a little sticky, too.

The mouthfeel of Dreadnaught is more like a saison than it is a DIPA.  It is lively, and effervescent, and really feels like it is scrubbing out every inch of your mouth.  You almost are left with that “just brushed” clean, tingling feeling with every sip.  The carbonation is small and sharp and scrubs away any residual hop flavors while simultaneously enhancing the bitterness.  As far as alcohol goes, this is one of those DIPA’s that warms as it goes down.  It doesn’t burn in the same way a shot of bourbon does, but it has a nice warmth that warns you about the hangover you’re about to have. 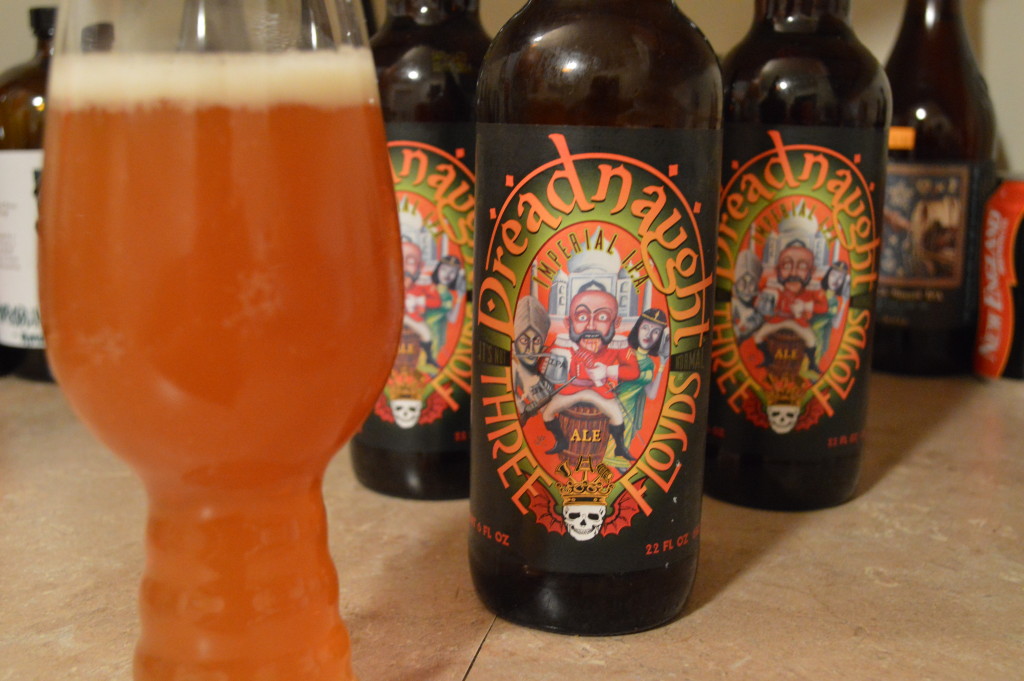 The taste actually follows the aroma fairly well.  The initial flavor is an orangey, peachy sweetness followed by a huge pine bitterness.  The bitterness is big, but only big enough to make this beer balanced.  If this bitterness was on a beer with a smaller malt bill, I’d most likely complain about how harsh the hops are, but in Dreadnaught they play perfectly with the sticky saccharine flavors of the malts.  The hops impart notes of lemon, mango, and bitter grapefruit peel, too.  To me, the most impressive part of Dreadnaught is just how crisp it finishes.  Yes there’s a lingering bitter bite, but it finishes clean enough to make you come back for sips 2 and 3 and 4 and before you know it the glass is gone!

When it comes to my go-to Three Floyds IPA, it’s a toss up.  Dreadnaught is my choice if I want something a little more bitter, and if I just want some big hop flavor I’ll stick with Alpha King (I can’t count Zombie Dust as it’s just an APA).  Dreadnaught is going to receive a 99 from me.  This is a fantastic beer that makes me beg for more.  Not only is it one of my favorite FFF IPAs, it’s one of my overall favorite DIPA’s.  The only thing that is keeping it from that perfect 100 is the bitterness.  For my personal preference, I just like a touch less bitterness, but the flavor profile of those juicy American hops more than make up for a little tongue scraping.  Trust me, this is one of those beers you just don’t want to miss.