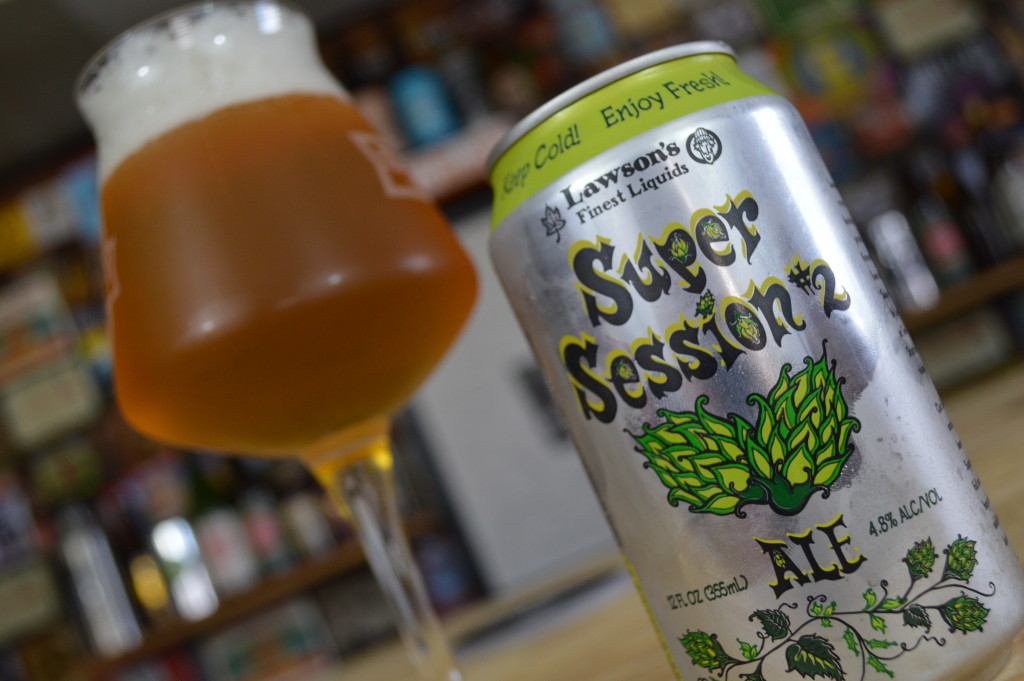 I’m going to be completely honest, when it comes to craft beer, Vermont isn’t playing fair.  Ok, maybe that’s just jealousy talking, but I’m always amazed how that one state has been able to produce so many breweries that make world-class beers in just small enough batches that you can’t get them outside of state lines.  These breweries gain god-like reputations, and their beers are, seemingly, never below perfect.  That’s been the case with Lawson’s Finest Liquids.

Lawson’s Finest Liquids produces some of the best IPA’s in the world.  Double Sunshine and Sip of Sunshine rate nearly perfectly across the interwebs and while I haven’t tried either of those two gems, I have my hands on Super Session #2, a session IPA brewed exclusively with Amarillo Hops.  The man I traded with to get this said that SS2 is basically Sip of Sunshine light.  All of the flavor, just in lesser amounts.  Words like that bring up only one question, could this be the single greatest session IPA of all time?

Super Session is like clear liquid copper in a glass.  It’s got orange and copper hues, but is almost brilliantly clear.  The head started about an inch high, but has since quickly dissipated.  I was kind of hoping for a little more retention and a little more liveliness out of this Lawson’s libation, but it looks light, fresh, and drinkable.

I was told when I picked this up that it had all the flavors of Sip of Sunshine, Lawson’s more famous IPA big brother to Super Session, but just a bit muted.  The aroma is more or less that, a watered-down IPA.  There’s a grassiness, and a bright lemony aroma, but in all honesty it isn’t jumping out of the glass.  I get slight herbal, resinous notes, maybe some dank earthy tones as well as a bit of orange peel and peach skin, but I’m doing my best bloodhound impression to get even that lengthy of a description.

If you’ve ever had a Mountain Dew, you’ve had the mouthfeel of Super Session #2.  It’s a step above watery, but has a ton of carbonation to help give the perception of body.  The bubbles, unlike Mt. Dew, are tiny, smooth, and soft.  You can take multiple gulps per swig and it’s not like swallowing a Brill-O Pad.  It finished light and dry, just as I hoped. 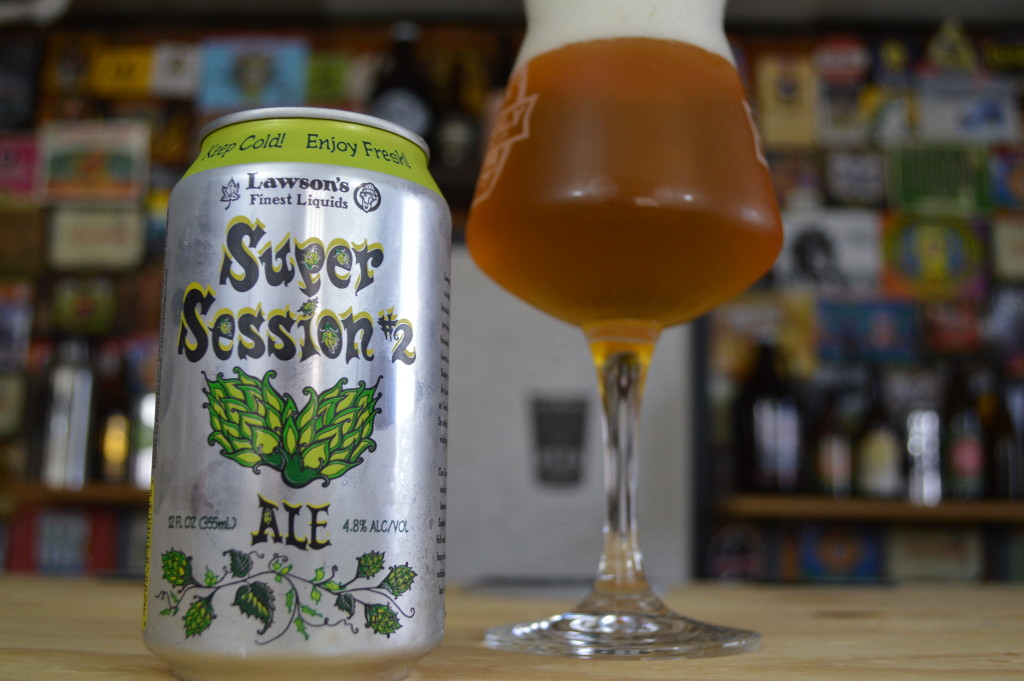 Wow, that’s extremely well done! Super Session #2 is all back-end, it’s all bass.  Usually in a session IPA, I get hop flavor up front with a watery aftertaste, and this is basically the opposite.  In the front of the tongue and taste it’s light and floral, but as you swallow and let it develop there are big, peppery, lemony, citrusy, earthy hop flavors in just enough balance to not be too bold.  The bitterness is almost absent until about 5 seconds after swallowing, then it slowly creeps in begging you to drink more.  I’d even go as far to say that the lingering bitterness here is more bitter than some full-blown IPA’s I’ve had.  The more I drink it, though, the more that bitterness goes away and I’m left with just great, lemony, orangey, Amarillo hops.

I’m not sure exactly what yeast they use, but I think it’s important to the flavor as well.  For some reason I get more of a spicy kick than I’m used to with Amarillo hops.  I’m assuming this comes from the yeast, but the yeast also helps give this a dry finish which is perfect for a session ale.

So, the question is: does Super Session #2 live up to all the hype that comes along with being a Lawson’s beer?  Absolutely.  It’s hard to say that any session IPA is going to blow you away, but this thing is downright delicious.  I’ll put it this way, if I had to get Super Session #2 or a middle-of-the-road IPA, I’d choose SS2 every time.  It’s dryness, drinkability, and hop flavor is unlike any session I’ve had and would make a perfect any-time beer in the summer.  For that I’m giving this a 95.  If I were to judge this as a regular IPA, I wouldn’t be able to go that high, but as a session it’s really THAT good.  Also, it doesn’t hurt that I have a soft spot for Amarillo.

Trade for it, mooch one from a friend, or just take the road trip to Vermont, this is a beer you’ll wish you had in your fridge all summer long.