STONE CITRUSY WIT
When it comes to the beers and the ingredients used, Stone Brewing gives a wit. So rather than brewing just another orange witbier, the Stone brewing team cleverly twisted its version with the dynamic duo of tangerine and kaffir lime leaf. The fruit-forward aromatics and flavors are perfectly balanced and eliminate the supposed need of any garnish. Each dryly refreshing, citrusy sip of this beer has been brewed to satisfy the palates of hardcore beer enthusiasts and novices alike.

“This is the first time we’ve released a Belgian-style witbier for our fans nationwide, said Stone Brewmaster Mitch Steele. “We set out to create something very flavorful and refreshing for the summer months, set on creating a more innovative wit. First, we played around with tangerine and then the team landed on kaffir lime leaf to help punch it up even more with an intense citrus fruit flavor, all complemented by the beer’s subtle coriander spice character.”

Enjoy Stone Citrusy Wit fresh during the summer months or store it at proper cellaring temperatures (55°F or lower) for up to one year after its “bottled on” date. Stone Citrusy Wit will be available through September.

STONE MOCHA IPA
With deliberate disregard for traditional brewing styles, Stone Mocha IPA blurs the lines between an IPA and a stout. Technically an all-out double IPA, this decadent creation is brewed with the combination of golden-roasted coffee, pure dark chocolate and citrusy hops. The result is a love child of a beer characterized by a beautiful meld of imperial IPA and mocha indulgence. 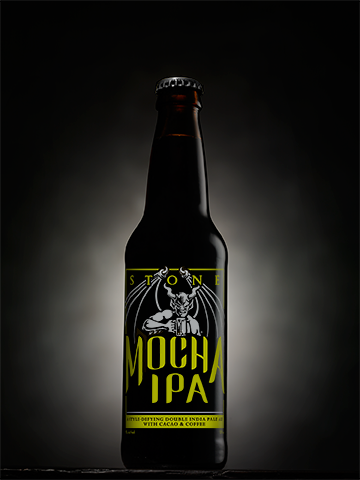 “This double IPA pours deep gold but has the deceivingly rich flavors of a stout.” said Steele. “I’ve had countless amazing coffee IPAs and chocolate IPAs but this mocha blend really balances the bold hop qualities created by Cascade, Citra and Amarillo with rich cocoa and prevalent coffee traits.”

A double IPA with dynamic hop character, Stone Mocha IPA will be available through September and should be enjoyed within the 120-day “enjoy by” date printed on the bottle’s shoulder.